What To Do After a Kentucky Car Accident

Whether you were born and raised in Kentucky, made it your chosen home, or are an occasional tourist or visitor, chances are you are well aware of all that the Bluegrass state has to offer.

Kentucky is probably best known for the things that bear its name... like the Kentucky Derby and Kentucky Fried Chicken. But it's also known for Louisville Slugger baseball bats, bourbon, automobile manufacturing, college basketball, and burgoo. (For the uninitiated, "burgoo" is a Kentucky classic, which is a spicy stew with chicken, pork, or mutton.)

Louisville and Lexington are the largest cities in Kentucky. The Commonwealth's tourism bureau describes them as "blending small-town charm with modern sophistication" because of arts, culture, entertainment, and other recreation.

Other primary city centers in Kentucky are:

Anywhere there are cars, there will be car accidents.

Kentucky is no exception.

The Kentucky State Police report that there were 733 traffic fatalities in Kentucky in 2020.

Here's a look at vehicle collisions in Kentucky as reported in the 2020 Kentucky Collision Facts study by the state police: 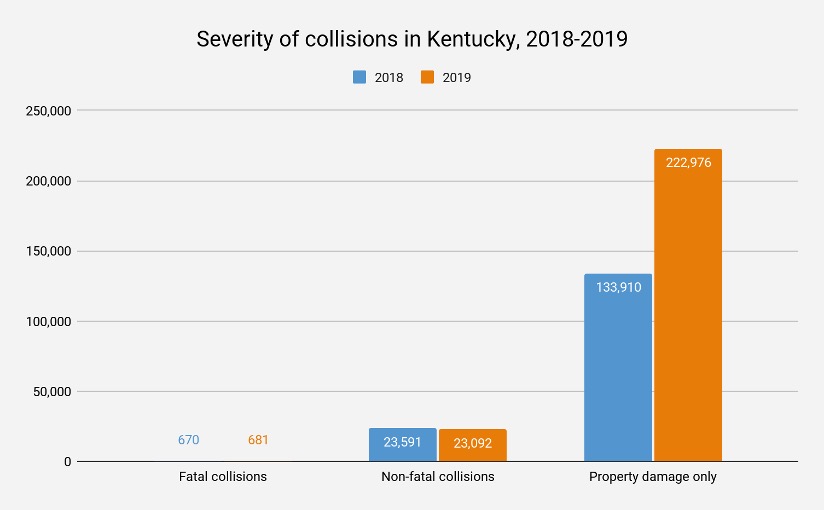 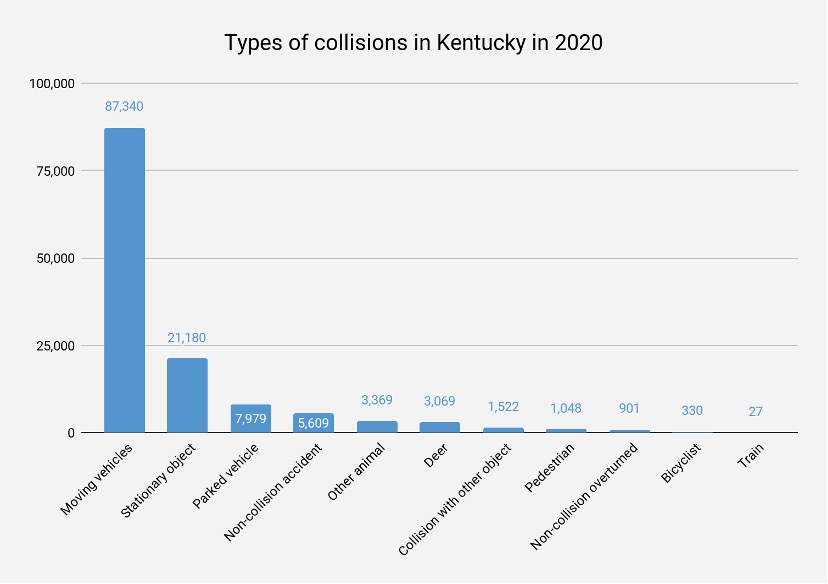 All Kentucky drivers are required to have personal injury protection (PIP) insurance included with their auto policy. What this means is that if you're in an accident, you would file a claim on your own insurance policy—regardless of who is at fault.

All motor vehicles in Kentucky (except motorcycles) are required to have insurance policies that include a minimum of $10,000 per person, per accident in PIP coverage.

If you're a Kentucky driver in an accident that you caused, no-fault insurance could be to your benefit because the other driver is not permitted to sue you for their damages unless their medical expenses are above a certain threshold.

If you were the victim of an accident caused by another driver, you can have your expenses covered quickly and without a lengthy process of determining who was at fault. If your expenses exceed the amount of your insurance coverage, you would then turn to the at-fault driver's policy or file a lawsuit.

You are NOT permitted to file a lawsuit in Kentucky unless the amount of personal injury damages is $1,000 or more—or if the accident caused 1 or more of these conditions:

The threshold is for your bodily injuries, only. You could file a claim against the at-fault driver for property loss or damage to your vehicle if the cost is not covered by your insurance.

What does PIP coverage include?

Opting out of no-fault limitations

Yes, it's a "requirement" that you have PIP insurance in Kentucky. But also, there is a way to opt-out of this type of coverage. You may file a Kentucky No-Fault Rejection Form with the Kentucky Department of Insurance, which would allow you to elect not to carry PIP.

However, you will be required to have the following:

If you have PIP insurance, the no-fault law means you waive your right to file a lawsuit for medical expenses against the at-fault driver. However, if you opt-out of PIP, another driver could file a lawsuit against you if you are at fault.

The no-fault law aims to keep car accident claims out of the court system by discouraging lawsuits and making it easier for a potential plaintiff to receive compensation without the judicial system getting involved.

But there are times when a lawsuit is the only way to recover funds.

Kentucky follows a pure comparative negligence standard. Under this rule, damages recovered by a plaintiff will be reduced according to the plaintiff's percentage of fault.

Here's how it works:

Claudia was driving from her home on Friedman Avenue in Paducah to take her children to Clark Elementary School on Buckner Lane. She was about to turn left onto Buckner when her daughter Elsie let out a blood-curdling scream from the back seat. Though Elsie has a flair for the dramatic, Claudia was startled by the scream and turned around to see what happened (it turned out that a bug landed on Elsie's face and she went bonkers).

As she turned around, she failed to see a car driven by Jed, a visiting minister heading toward the church just down the road from the elementary school.

Jed was driving on Buckner, approaching from Claudia's left. She should have yielded the right of way but accelerated when she was startled by her daughter's scream.

Jed could have stopped when he saw Claudia accelerate into the intersection, but at that moment he was reaching for his coffee and he didn't react quickly enough to avoid the collision.

Jed filed a lawsuit against Claudia for his serious injuries (which exceeded the amount covered by his insurance policy) and to replace his vehicle (which was totaled). The court found that while Claudia did cause the accident, Jed was also partially at fault.

Types of damages you can recover from a Kentucky car accident

If you're in a car accident, you can recover "damages," which is the legal term for financial costs or compensation.

You're entitled to recover damages so that you are made "whole"—or so that your financial situation would be the same as what it would have been if the accident hadn't happened. In other words:

If you're a victim and not at fault, the accident should not cost you money.

Accident damages are split into 3 categories: economic, non-economic, and punitive.

Economic damages are those with a specific monetary amount. For example, medical treatments, property loss, lost wages, rehabilitative therapies, assistance with daily life activities (like housekeeping, childcare, etc.) are all included in an award for economic damages.

You can determine some of the amount of economic damages by totaling the costs of all of your associated bills and expenses. But that's not always the whole story. If the accident resulted in only minor injuries and you're completely recovered and back to work, then this might be a good way to figure out damages.

However, if your injuries were severe and require ongoing treatment or follow-up, you likely don't know ahead of time what the total costs will be (and for how long you're going to be paying for them).

In addition, if you've had to take extended time off from work and you're still not back to the job you had before your injury (particularly if you don't know when or if you can go back to the same job and salary), you likely aren't sure exactly how much you're losing or will lose because of reduced salary or benefits.

That's why you need a car accident lawyer as soon as possible after your accident. Your attorney will work with medical experts, actuaries, financial professionals, and others to determine what your costs will be in the long term. Whether your injury is expected to be treated and resolved in the near future or will leave you with lifelong expenses and disabilities, these are not calculations you should make on your own. Your lawyer is the best person to determine the amount of costs in the future.

Don't be shortchanged tomorrow by expenses that you're not anticipating today.
Tweet this

Non-economic damages are those that don't have a specific monetary value, but that doesn't mean they don't count.

Examples of non-economic damages include:

Enjuris tip:Although it's hard to attach a cost to these intangibles, the legal system has certain methods for calculating non-economic damages.

Both economic and non-economic damages are considered "compensatory damages" because they provide compensation for your losses.

Another less common type of compensation is punitive damages. Kentucky defines punitive damages as "exemplary damages" and those "awarded against a person to punish and discourage him and others from similar conduct in the future." (KRS 411.186)

In order to receive punitive damages, the plaintiff must prove by clear and convincing evidence that the defendant acted with oppression, fraud or malice.

Punitive damages can be awarded by the court in a personal injury lawsuit if the defendant's action (or omission) was so willfully negligent or reckless that the court determines it warrants punishment. A punitive damage award is separate from (and in addition to) the plaintiff's regular damages award.

For example, in a car accident where a plaintiff suffered severe and permanent injuries, punitive damages could be awarded if the defendant was driving under the influence of drugs or alcohol, among other things.

What to do after a Kentucky car accident

In the immediate aftermath of a car crash, you're likely pretty shaken up. Even a minor accident can leave you feeling upset and confused, and in the moment it can be hard to remember what to do.

Regardless of how the accident happened, there are steps you can (and should) take to preserve your legal rights and recover damages.

First, evaluate your own condition, your passengers, and other involved individuals. If you're unable to move or follow the steps below, don't worry. Call 911 if you're able. If you can't, wait for someone to provide you assistance.

If you feel up to it, follow these steps after an accident:

Enjuris tip:These additional resources can help after a crash:

An insurance company wants to settle your claim and make it "go away." But that's not always the best solution that provides you with the full compensation to which you're entitled. If you can't get adequate resolution, the next step could be to file a lawsuit.

And, even if you're not sure if the amount of the settlement you're being offered is enough, it's best to consult a lawyer before accepting it. An attorney can tell you whether you're getting full coverage.

However, once you agree to a settlement, you can't change your mind — so consulting with a lawyer has to come first. Even if a lawsuit isn't necessary, many attorneys are also skilled and experienced at negotiating with insurance companies. They can help work with adjusters to ensure you receive a fair settlement.

If you need a Kentucky car accident lawyer, use the Enjuris law firm directory to find the one that's right for your situation.

Still not finding what you need?
Check out our other articles on motor vehicle accidents in Kentucky. 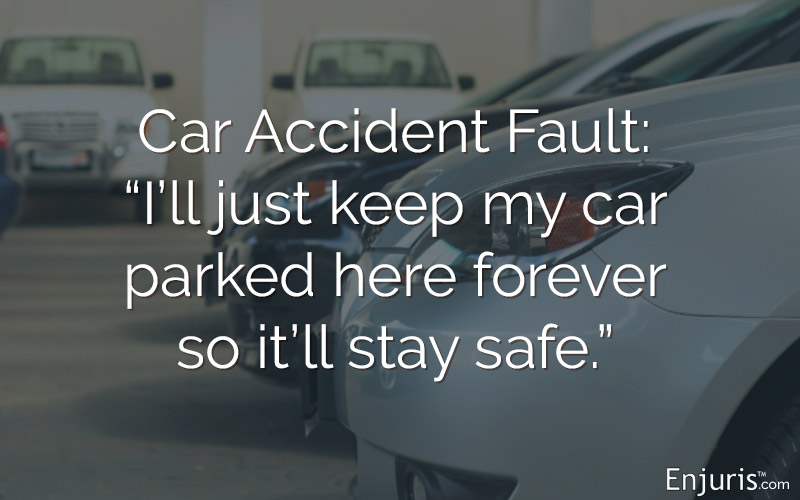 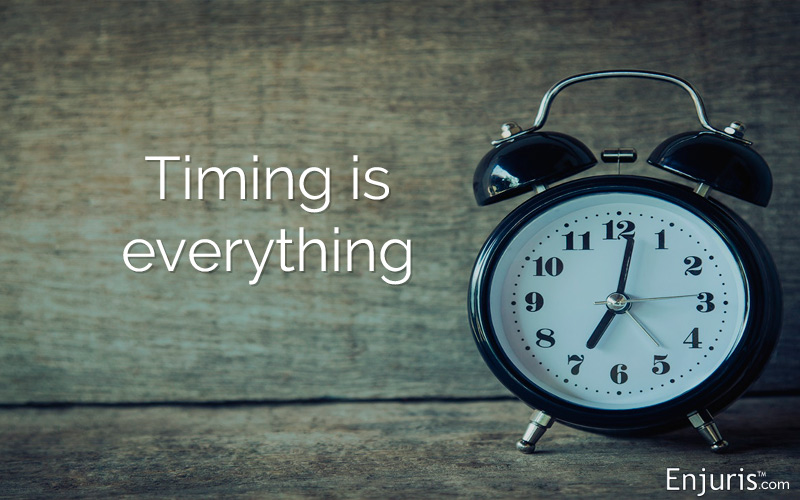 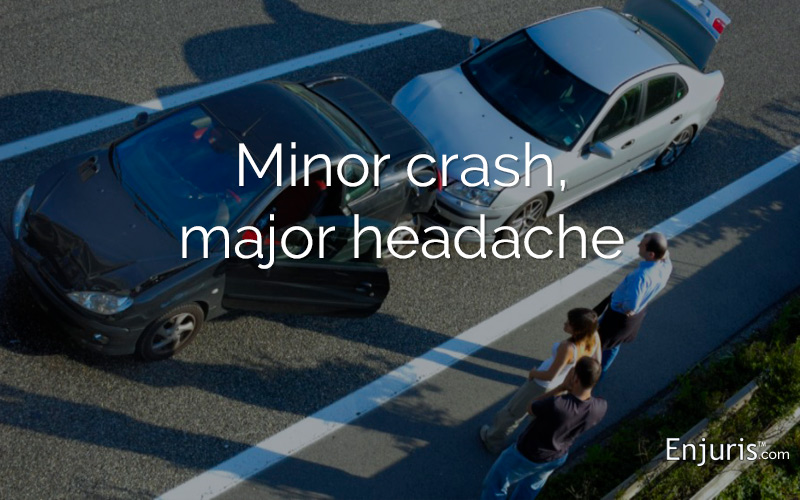 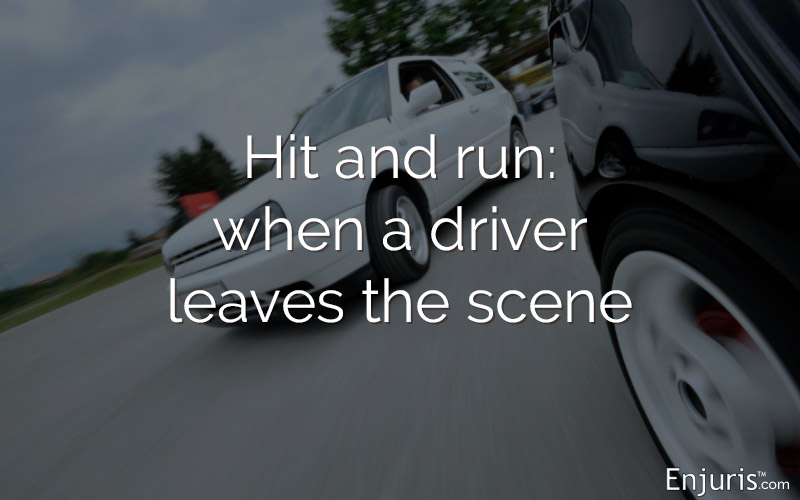 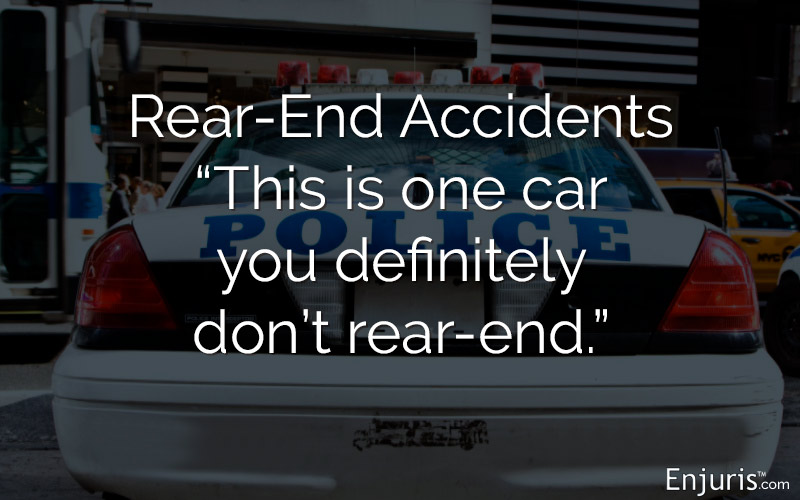 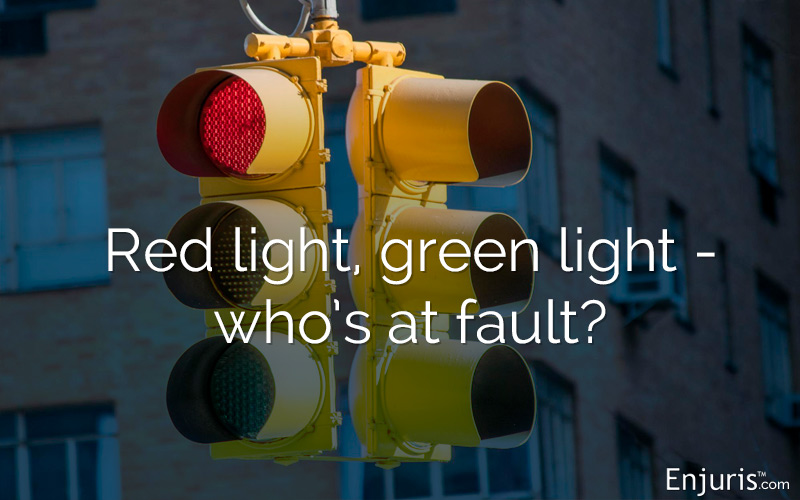 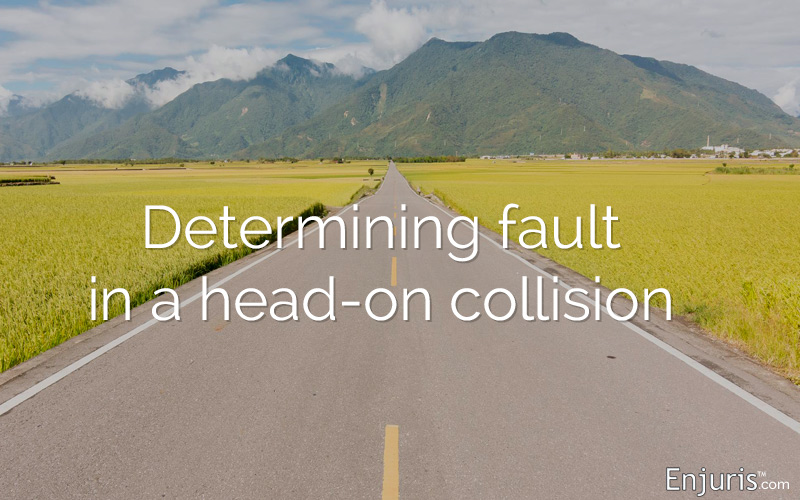 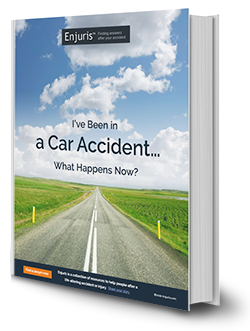