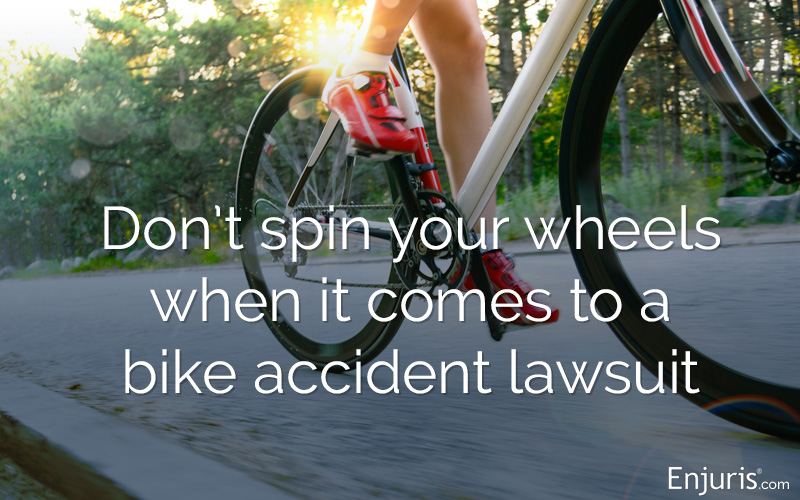 Table of Contents + show
Kentucky no-fault insurance and comparative negligence rules can affect your bike accident claim
Common causes of Kentucky bike accident injuries
Kentucky bike laws
When do Kentucky bicyclists have the right of way?
Kentucky’s pure comparative negligence rule
Bike accident injuries and damages
What to do after a bike accident in Kentucky
Cycling has grown in popularity in recent years and there are more cyclists on the roads now than ever before. And while that’s great in lots of ways, there are costs, too. Specifically, bicyclists and drivers have to share the road. Know what to do if there’s a collision.

Have you tried the Kentucky Bourbon Trail?

It’s a bike trail that passes by 9 distilleries, combined with views of rolling hills and thoroughbred horse farms. The trail even takes you through the Perryville Battlefield and Old Fort Harrod State Park. It’s a scenic way to capture the Kentucky experience.

Regardless of whether you’re an experienced cyclist, a casual rider, a bike commuter, or someone who occasionally bikes with family and friends, it’s important to be familiar with Kentucky road rules for both bicyclists and drivers.

You should also know the laws regarding insurance and personal injuries, just in case you ever suffer a bike accident injury. If that happens, it’s a good idea to contact a bike accident attorney because each case is different and your lawyer will help you reach the best resolution.

Facing factsThere were 347 bicycle collisions in Kentucky in 2019. Of those, there were 5 fatalities and 219 injuries. The reported cause of 91 collisions was driver inattention, and failure to yield the right of way was listed as the cause for 30 of them. (source)

More than ⅓ of Kentucky bike accidents in 2019 were caused by a driver’s negligence. Although the drivers caused these accidents, there are things that cyclists can do to avoid being injured. Understanding how accidents happen can be one way to keep yourself safe while on 2 wheels.

Here’s a look at the 5 most common causes of bike accidents:

Distracted bicycling is a big problem, just like distracted driving.

We’ve all become so attached to our phones and devices that the temptation to use electronics, even while biking, is a strong one. It’s always dangerous to look at your phone or device while cycling because taking your eyes (and mind) off the road and any oncoming traffic, even for a moment, can be a tragic decision.

Enjuris tip:If you’re riding a bicycle, use only 1 earbud or AirPod (if you must use it at all) and always keep the other ear “free” so you can hear traffic or other signals around you as you ride.

Like drivers, cyclists should ride in a way that allows them to be in control of their bikes at all times. A safe speed will depend on road conditions, weather, amount of travel, speed of vehicle traffic, and other factors.

Some states have laws that clearly state the amount of space a driver must allow as clearance between a vehicle and a bicyclist. Kentucky does not have a law on this issue. However, driving responsibly includes traveling at a safe enough distance from other road users to avoid a collision.

Some drivers (and bicyclists) think that because cars tend to move more slowly in parking lots or when backing in or out of a driveway, those areas aren’t dangerous. But because these scenarios often involve backing up and unexpected movement, they can present risks.

You probably have a general idea about bike and road rules, and many are similar from state to state. But here’s a look at some of Kentucky’s specific bike laws.

A bicyclist should follow the same road rules as if they were driving a car, except that a bike may be ridden on a road’s shoulder. No more than 2 bicyclists may ride abreast in a single lane unless part of that lane is designated for bicycle use.

A bicyclist is expected to keep to the right-hand side of their lane unless:

A bicyclist using a sidewalk must follow the same rules as a pedestrian, which includes slowing to an ordinary walking speed when near pedestrians and obeying traffic devices and signals in crosswalks.

The Kentucky Transportation Cabinet sets forth this list of rights and responsibilities for bicyclists:

Kentucky does not have a helmet law for bicyclists. Helmets are widely recommended as a safety measure, but Kentucky is one of a few states that does not require them for any type or age of rider.

Yes, you read that right.

There’s an Idaho stop law that’s also followed in Kentucky. It says that a bike may go through a red stop light if the stoplight doesn’t detect the bicycle. In other words, if a light is on a sensor and the bike’s weight is not enough to trigger the cycle, the bicycle may proceed through.

When do Kentucky bicyclists have the right of way?

Kentucky follows a pure comparative negligence standard. Under this rule, damages recovered by a plaintiff will be reduced according to the plaintiff’s percentage of fault.

What this means in bicycle accident cases is that the bicyclist is not always “right.” It can be a difficult process to acquire damages (costs) related to a bike accident and fault can be disputed.

Kentucky is a no-fault state, which means that each person involved in an accident turns first to their own insurance to collect damages. That’s fine if you have insurance that covers you as a bicyclist, but if you don’t own a car and you’re injured, then what insurance do you use?

The motor vehicle driver’s Personal Injury Protection (PIP) insurance should also cover you as a bicyclist if they caused an accident and you don’t have insurance. But if they are uninsured or underinsured, or if the cost for your injuries amounts to more than the policy limits, then your only recourse is to file a personal injury lawsuit.

A personal injury lawsuit is based on establishing who is at fault for an injury and how much the injury is “worth,”—or its financial cost to the plaintiff.

In a comparative negligence state like Kentucky, the plaintiff’s damage award will be reduced by their percentage of fault.

For instance, even if a car collides with a bike, the bicyclist could be partially liable if they were riding too fast to be safe in that particular instance. If the cyclist is found 20% liable, then their damage award would be reduced by 20%.

If you’re involved in a Kentucky bike accident, there are steps you can take to preserve your legal claim. First, get the medical treatment you need. Your physical well-being after an accident is always your first priority.

If you’ve been injured, you’re entitled to recover costs for:

What to do after a bike accident in Kentucky

If you’re able to do so, take these steps after a bike accident: