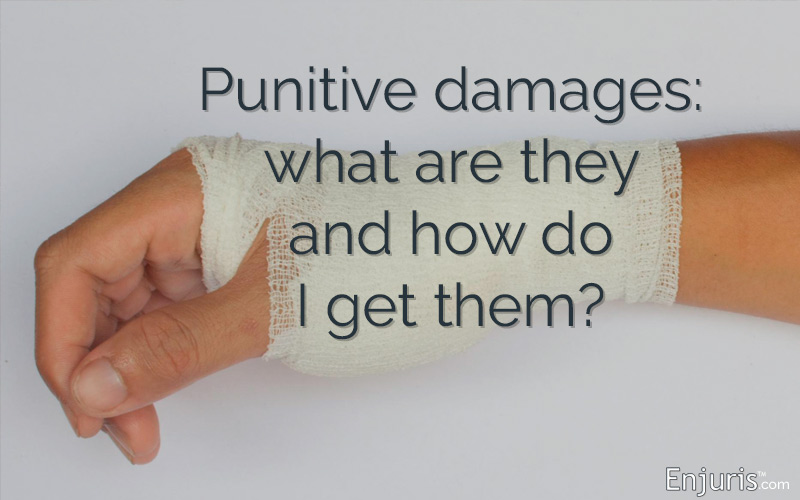 Most personal injury cases won't include a claim for punitive damages

Punitive damages, meant to punish rather than to compensate, are rarely available in personal injury cases. But, when the defendant’s behavior is extreme or intentional, such damages may be available.

The main purpose of personal injury lawsuits is to return the injured party to the position they were in before their injury. However, in rare cases, the defendant’s behavior is so extreme that the court also rules to punish the defendant and deter others from behaving similarly. This is where punitive damages come into play.

When it comes to personal injury law, there are two types of damages: compensatory and punitive.

There are two primary purposes for awarding punitive damages:

When are punitive damages available?

All states (with the exception of Nebraska) allow punitive damages in certain cases. In most states, punitive damages are only permitted in tort cases (e.g., personal injury or medical malpractice cases).

Regardless of the type of case, punitive damages are only awarded when the defendant’s conduct is egregious or intentional. The exact standard that must be met differs between states. But, generally speaking, the conduct must be either:

For example, let’s say a store owner forgets to tell an employee to shovel the snow from the store’s steps and a customer slips and falls. The store owner will likely be found negligent.

What is the standard of proof?

In most states, a plaintiff who is seeking punitive damages must meet a higher standard of proof than would be required if they were merely seeking compensatory damages. Most often, this standard is one of “clear and convincing evidence.”

Who gets the money?

Georgia requires that 75% of any punitive damage award be paid to the Georgia State Treasury. Tweet this

How are punitive damage awards limited?

Perhaps most importantly, the United States Supreme Court (along with most states) has placed caps on the amount of punitive damages that can be awarded.

Most states place specific caps on the amount of punitive damages that can be awarded. For example, in Missouri, a plaintiff cannot receive more than 5 times the amount of compensatory damages awarded—or $500,000, whichever is greater.

Additionally, in many states, punitive damages cannot be awarded at all if there are no compensatory damages.

What are some case examples where punitive damages were awarded?

You probably remember the McDonald’s hot coffee case of the early 1990s. In that case, 79-year-old Stella Liebeck spilled scalding hot coffee in her lap, resulting in 2nd and 3rd-degree burns.

Discovery in the case revealed that McDonald’s had received hundreds of prior complaints about the coffee causing severe burns. Nevertheless, McDonald’s chose not to change its policy of requiring their coffee to be kept at 180-190 °F.

At trial, the jury found that McDonald’s knew their product was dangerous but did nothing to correct the problem.

However, the trial judge vacated the award after determining that William hadn’t met the burden of showing “clear and convincing evidence” that the arresting officers acted intentionally or recklessly.

An Ohio jury ordered DuPont to pay $10.5 million in punitive damages to Kenneth Vigneron, a man who claimed he developed kidney cancer as a result of exposure to C-8, a toxic chemical used in the production of Teflon.

The jury found that DuPont acted maliciously by dumping C-8 into Kenneth’s local water supply. The jury determined that DuPont knew the C-8 could cause cancer but continued to dump the chemical into the water despite the existence of cheap, alternative disposal methods.