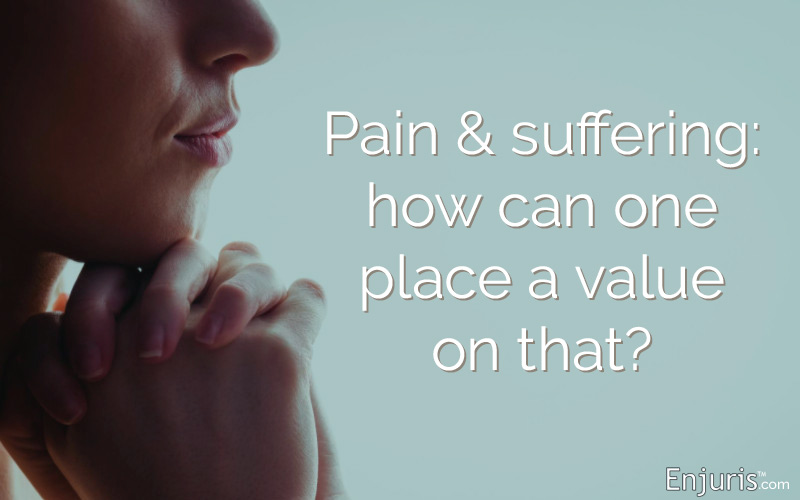 What is pain & suffering and how do you claim it after an accident or injury?

How much is an individual's sense of wellness as experienced on a daily basis worth in terms of actual cash value?

The legal notion of pain and suffering can seem rather nebulous until the time comes that you feel you deserve to be compensated for it.

It's a concept that asks you to look beyond easily tabulated things like medical bills and attach a cash value to something as basic as what a day without pain or trauma is worth.

To the injured person, the answer likely feels simple. For someone who has been in an accident, the answer is apt to be, "a lot."

The process of seeking personal injury damages, however, demands that everything be documented and calculated.

It's important to keep in mind what pain and suffering is and is not.

Foremost, pain and suffering does not include anything that could easily be defined as medical expenses.

The concept of pain and suffering addresses the overall loss of comfort, happiness and opportunity that usually follows an accident.

Enjuris tip: The concept of pain and suffering addresses the overall loss of comfort, happiness and opportunity that usually follows an accident.

It should be noted that medical expenses do typically figure into the baseline calculations used by most insurance companies when calculating pain and suffering.

A common figure that's used throughout the industry is a multiplier between one and five. This means that pain and suffering is calculated over and above medical expenses at that rate.

For example, if an individual's medical bills amounted to $50,000, the calculated pain and suffering for a 3X multiplier would peg damages at $150,000. The total combined award for pain and suffering alongside medical expenses would be a total of $200,000.

4 myths about pain and suffering

For example, spouses typically can seek damages for pain and suffering in California, but they'll usually have a much harder time in Texas.

Many states place strict limitations on recovery for pain and suffering by people who weren't the ones primarily harmed by an incident.

Arriving at a figure for pain and suffering

The idea of using a multiplier that ranges from one to five can seem like it leaves a lot of room for the math to get fuzzy. It often does.

While it's easy to document medical expenses, arriving at a specific multiplier for suffering is not so simple.

The biggest thing injured people need to do is document everything.

If you felt psychological trauma, it's important to work with a practitioner and clearly document what you felt and when you felt it.

The same goes for pain.

Many attorneys encourage their clients to maintain daily logs in order to note when they felt pain and how long they endured it.

The best way to get the maximum payout from an insurance company is to present clear documentation of how you felt in the months following an accident.

Specific details allow a lawyer to present a clear and compelling argument.

If that seems like a lot of work, try to remember that the difference between a 2X and a 3X multiplier being applied to your claim is a net of 50 percent more money. In that light, it's easy to see why you need to document everything on a daily basis.

Exceptions to the pain and suffering multiplier

The multiplier is merely a framework for arriving at a specific figure. There are easily imagined instances where a different number can be arrived at.

Consider the possibility of an injury that may have been more costly in terms of suffering than in medical costs.

The classic example attorneys like to use is a major facial scar.

The medical costs that accompany a disfiguring scar may actually end up being in the low thousands. Most people would see it as unfair for a person who was horribly disfigured to be paid $25,000 in pain and suffering damages simply because it only cost $5,000 to address the immediate medical issue.

How to claim pain and suffering damages

The technical term for pain and suffering is general damages.

These damages are distinct from special damages, which cover medical bills, damaged property and other things that are relatively easy to quantify.

They're also distinct from punitive damages, which are typically only granted as part of a lawsuit.

All jurisdictions have statutes of limitations in place regarding how long you have to file a claim. Although it varies among different states, a good rough guess is that you'll have two years from the date of the actual injury to file paperwork indicating that you intend to seek compensation.

It is wise, however, to check the requirements for the particular state where your accident occurred.

In the weeks following an incident, a person's attorney will contact the insurance company that covers the party believed to be responsible for the injuries that occurred.

In the early stages of the process, the most important thing is finding out who to contact at the insurance company. A claim will not be processed right away because it's important to learn about all the medical expenses before attempting any calculations. Injured parties don't typically wish to risk anything uncovered in their eventual settlements.

Enjuris tip: Your personal injury case could take a few months or it could last years. See an overview of how long your injury claim may take.

If you remember anything about pain and suffering, remember this

Once a settlement has been reached, that's almost always the end of the matter.

It's important to make sure that you receive enough money to properly compensate you for problems that may last well into the future.

If you believe you're entitled to damages for pain and suffering, your primary goal should be to thoroughly document everything you experience.

Your lawyer will need to be able to present a clear set of dates while negotiating a settlement with the insurance company. By being diligent with documentation, injured parties can improve the likelihood that they'll be awarded general damages based upon a higher multiplier.