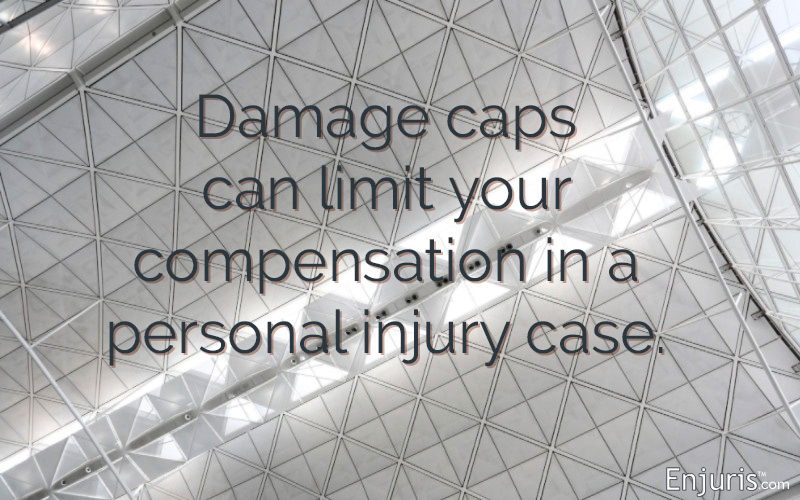 Damage caps can seriously limit your amount of compensation

After an accident, you’re concerned about how you’re going to pay for the looming medical bills and account for the lost time at work. Compensation can offer you help, but what if there are limits or caps on that compensation?

In all personal injury cases, liability must be established for compensation to be received. For some types of damages, however, caps can come into play, and those caps can quickly complicate your case.

Economic damages are generally easier to prove and are more objective in nature. They typically include damages that have had a monetary impact on the victim. Economic damages can include:

Enjuris tip: Calculating non-economic damages like pain and suffering is tricky. Make sure that you’re properly compensated and stand your ground if you believe a settlement offer is unfair.

Some examples of non-economic damages include:

If the injury results in a person’s death, the surviving family members may bring forth a wrongful death lawsuit. Damages that may be available in this type of lawsuit include:

Unlike other damages that are intended to make a person whole after an accident, punitive damages are designed to punish the responsible party. Due to this characterization, these damages are limited to specific cases that usually involve gross negligence of some sort. For example, a car manufacturer may have to pay punitive damages if they were made aware of defects in their product which they neglected to fix.

Sometimes, punitive damages are assigned when the injury is caused by intentional, reckless or grossly negligent behavior.

Each state can establish its own damage cap, but there is also a federal cap on non-economic damages in medical malpractice cases.

Those in favor of damage caps argue that the country is prone to entering legal disputes. They seek to limit the damages that can be awarded in personal injury lawsuits to avoid excessive verdicts that are based on emotions rather than reason. These advocates argue that such high awards have a negative impact on the economy.

Damage caps reduce the potential liability of defendants in personal injury cases. They also prevent higher costs from being passed on to the consumer.

Many believe damage caps in personal injury cases keep overall costs low for consumers in the long run.
Tweet this

See Personal Injury Myths for a discussion of these and other controversial topics.

Juries may not be aware of damage caps. Therefore, if they award a higher amount to a victim, this award is later modified so that the victim gets less money than his or her peers believed was fair.

Enjuris tip: Hiring an attorney can help with calculating your damages and negotiating settlement later on. Here are 11 situations where you may need a personal injury attorney.

The defendant involved in a personal injury claim may not be as willing to settle the case early on because he or she knows that the damages can only go up to a certain amount, and that can ultimately prolong the process and cost both parties more in legal fees and resources.