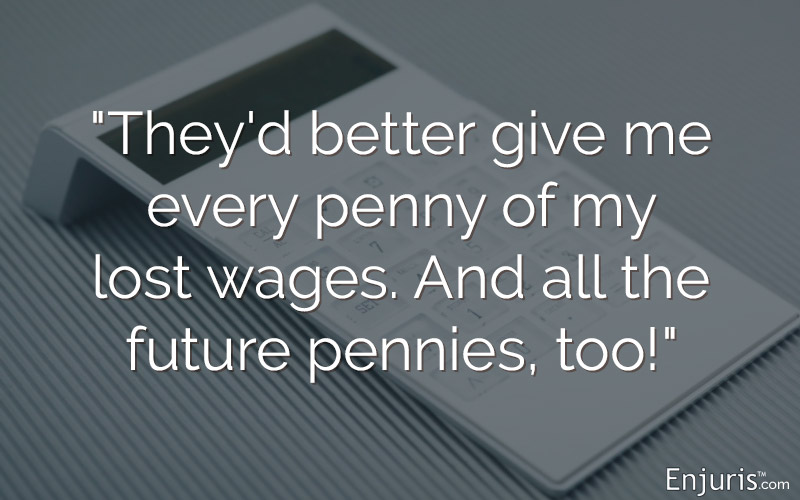 Lost wages, lost earning capacity, lost compensation – they sound the same, but they're all different.

When a person is injured because of someone else's negligence, he may be able to recover compensation – including income that you lose.

In addition to compensation for property damage and medical expenses, injured victims may be able to recover damages for the wages they lost because of the accident.

Ask your employer for a letter that contains:

There are a number of different types of damages that may be considered in the category applying to income lost, including the following:

Perhaps the easiest form of these damages to calculate is lost wages. This is for money lost because a person had to take time off work to recover for injuries sustained during an accident.

Loss of other benefits

A person is also entitled to recover for the loss of other benefits in addition to the loss of wages. InjuryClaimCoach outlines some good examples of benefits that need to be accounted for.

For example, if a person had to use multiple sick days to recover from the accident, he can seek reimbursement for those. This type of benefit is able to be reimbursed because if a person later would like to use a sick day for a different reason, this benefit will no longer be available.

In some instances, a person may use a vacation day rather than simply suffering unpaid days. Similar to sick days, he may make a claim for a lost vacation day when he used this benefit while recovering from injuries sustained in the accident. Some employers offer other personal time off, mental health or other forms of bonus days.

Other benefits may also be implicated because of an accident. For example, some employees receive additional benefits based on good performance or bonuses. If a person was out of work during a bonus period, he may lose this bonus because of a lost opportunity to perform at a higher level.

There may be other non-monetary benefits that can still be provided for as part of a compensation package. For example, using a company car, having a membership, taking up free golf outings or other perks may be lost because of time off work.

Because these different types of benefits can add up to a significant amount, it is important to consider these losses. Including them in the demand can have a significant impact on the eventual settlement.

One type of income loss that is more difficult to establish is that of lost earning capacity.

If someone is involved in an accident that causes a disability or that causes the person not to be able to return to the same job, there may be a claim for lost earning capacity. This form of damages asks for compensation for the difference between the earnings that a person may have earned had the accident not occurred and what he will earn because of the accident.

The court may look at a number of different documents to help determine the actual value lost. Some documents that may be evaluated include:

It is common for the party that caused the accident to downplay the severity of the accident.

The victim and the defendant may be at odds regarding the value of lost earnings. Economists and other expert witnesses may be required to help shed light on the value of the lost wages, benefits and earning capacity.

This is especially true when a person has suffered a disability at a young age when he may not have had much time to demonstrate earning capacity before the debilitating accident occurred.

A more complicated process is involved when a person is self-employed. This is because it can be difficult to substantiate such earnings when someone is not paid with a regular paycheck.

However, there are still ways to substantiate these earnings such as by providing income tax returns that show income, business records that show the amount of revenue, and expenses and other statements that demonstrate this information.

Letters from important clients that are no longer serviced can also help illuminate these losses. Individuals who are self-employed have the same rights to recover lost compensation as other workers even if their income might be more difficult to prove.

Another simple way to prove this would be to show the plaintiff's record of estimated tax pay-ins. Self-employed individuals are supposed to pay quarterly taxes based on their earnings, so if those pay-ins took a sharp dip, the court will be able to see that it coincided with the accident.

In order to best protect a person's ability to recover for lost income and compensation, there are several steps to take. He may need to receive specific notes from the doctor for time be taken off to recover from injuries and provide this information to his employer. The doctor may supply a prognosis that estimates the amount of time the victim should be off work.

He can use a post-accident journal to track days he missed work, in addition to details surrounding his well-being and ability to function after an accident. He will also want to ask his employer for a letter that states how long he was off work and how his pay is affected.

The employer letter may also contain more details such as special projects that the victim was working on before the accident that would have affected his pay, a history of bonuses or promotions, lost perks from work and any benefits used.

In some cases, expert financial advisors may need to be contacted. An economist or vocational expert may be able to estimate how an accident affected a person based on his current age, projected earnings, career trajectory, potential raises and ability to work in a different career.

If you aren't sure where to start, the Enjuris law firm directory would be a good place. A personal injury lawyer knows the calculations involved when dealing with lost wages, and he would be a good teammate for you to have.