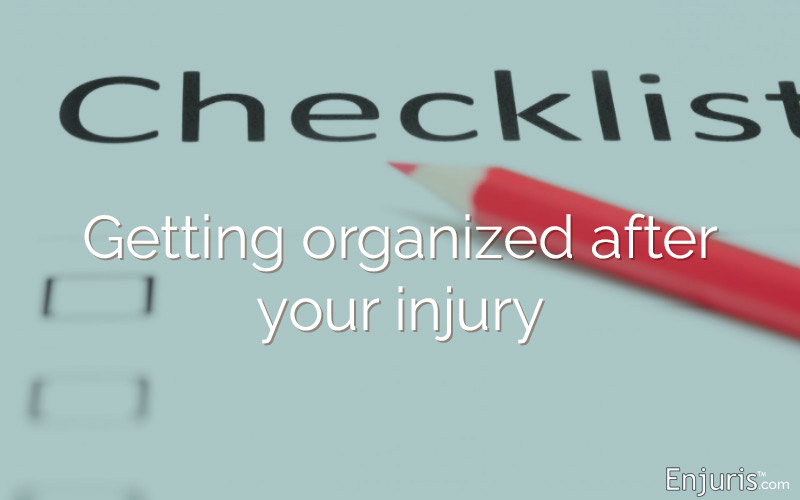 An accident claim or injury claim can require various types of documents or evidence. What documents you actually need will be based on the nature of the accident, the specific injury and damage resulting from the accident.

The following are basic documents that might apply to your accident or injury claim.

You can use this checklist as a starting point for your accident claim, to get a sense of documents or evidence that might prove useful. Your attorney will be able to consult on further documentation you might need and how you could obtain it. 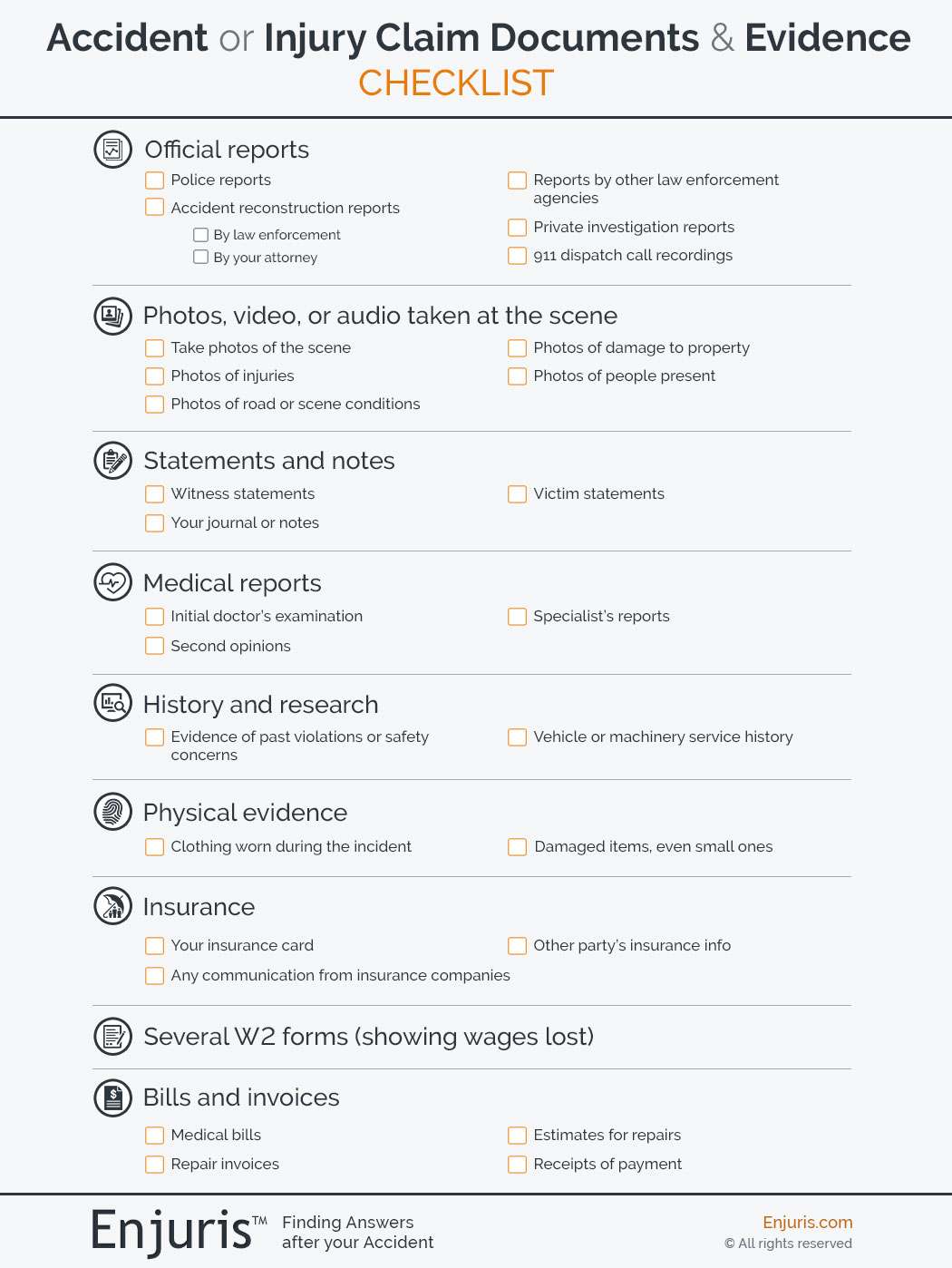 Police reports are considered public record and are available to all parties once completed.

There may be more than one police report depending on the number of responding police officers or law enforcement agencies.

There may also be an accident reconstruction report by a special division within the police department responding to the accident.

The police reports should not be taken as conclusive. The reports are a good starting point for an investigation for a client. The police officer reports could lead to other reports prepared by other labs and agencies working with the investigating law enforcement agency.

These are statements by individuals that saw or heard the accident.

Witnesses would also include individuals that would have relevant information about any aspect of the accident, including the people involved or those who could possibly speak to why the accident took place.

Witness statements can be completed by different sources, including the investigating police or law enforcement agencies, the parties to the accident and even any federal oversight agency that has jurisdiction of the scene or area of the accident.

For example, the State or Federal Highway Administration may also document the accident, if it happens on a state or federal highway. Another example is the Federal Aviation Administration, which has civil jurisdiction over airplane accidents.

Enjuris tip: Write down everything you remember after an accident, including any conversations you had with others at the scene.

These are probably the most critical documents in an accident claim.

The victim or client statement should be taken when the individual has the best recall of the events of the accidents.

It is important for your lawyer to determine if the victim or client has made a previous statement to any party other than their legal representative. The client may have inadvertently provided information which could mitigate the value of their accident claim or even alter the nature of responsibility of the other party.

Use our post-accident journal template to document your pain and suffering, reduced daily capabilities, and other ways the accident has impacted your life.

These reports would include the entire period that the individual is under a doctor's care and would cover all parties that claim that they suffered harm or injury as a result of the accident.

These records can also extend to the medical history of anyone related to the accident.

For example, if an individual had a pre-existing medical condition that should have prevented them from engaging in an activity which resulted in the harm to another person or persons, the facts surrounding the nature of that individual’s medical history and all supporting information and medical records would be relevant.

This should also include amounts charged for treatment.

Enjuris tip: Your state may have set the maximum fees that can be charged to you as well as timing for obtaining your medical records from the providers. See more from the US Department. of Health & Human Services on obtaining medical records, corrections, etc.

Research into past violations or safety concerns

These records involve safety records as well as inspection reports for any element involved in an accident.

For example, if a car was involved in an accident, the records of when that car was serviced as well as whether the vehicle's manufacturer was under a responsibility to issue a recall of the vehicle should be reviewed.

Additionally, if a piece of equipment was cited for several safety violations before being used and causing harm to another, the history of those past violation notices would be relevant.

Video and photos of an accident can include images taken before, during as well as after the accident. In many locations, cameras are placed in strategic locations which can capture any events taking place during the camera's exposure time.

The photography after an accident is just as important, as it will capture the nature and severity of any injury to any party involved in the accident.

Discovery is the process of a civil action in which one party of a litigated action is required to turn over relevant information to the other litigant before the merits of the case are argued before the judge or jury. Many civil cases are settled before the actual trial based on the information revealed in the discovery.

These reports could show the liability of one of the parties in more detail than a police report.

The service history of the vehicle involved in the accident is relevant to any car accident claim.

The vehicle's service history can be compared to similar vehicles and conclusions can be drawn which establish whether the history of the vehicle played a part in the nature of the accident.

If the accident is an airplane crash, evidence that the airplane was in service an extended period of time will lead investigators to factors which could answer questions as to whether parts had worn out or specialized service was lacking.

911 dispatch calls provide a real time account of the nature of the accident.

They also provide a record or evidence about of a victim or witness close to the time of the accident event.

911 dispatch calls will provide details as to the nature of the accident and will lead the principle investigator to other elements of the accident that should be examined.

Much like the security cameras mentioned above, in many locations that police have identified as high-crime areas, sound detection devices have been posted to capture voices, gunshots as well as the sounds of car accidents.

W2 forms give information proving your lost wages during the time you were recovering from an accident. This can be statements from your employer and potentially your W-2s for the period and prior periods.

You’ll also want to hang onto receipts or proof of any expenses relating to the accident. This could include receipts for:

Start a box for physical items and a folder for documents. File away everything that might be relevant.

The last thing you want to do is sabotage your own injury claim by losing or misplacing items that could help you prove your case. (See Why might a personal injury lawyer decline my case?)

Keep a physical copy and a digital copy of any items when possible.

Use a spreadsheet or master list of items to keep track of what you have and what you still need to obtain.