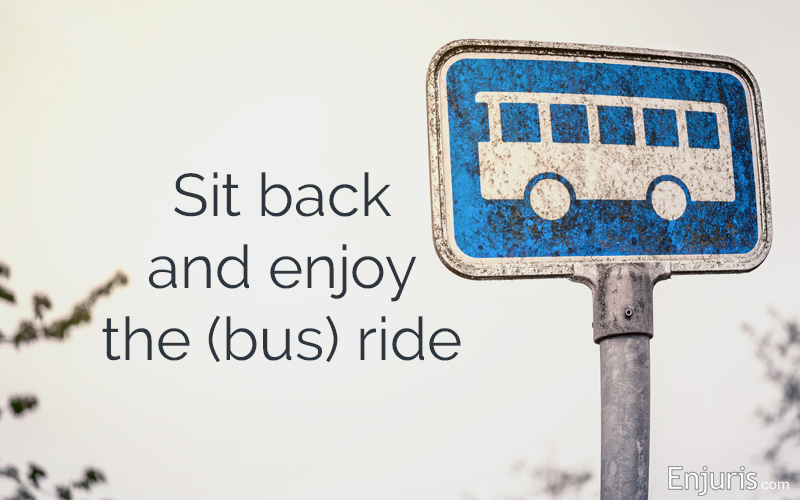 Whether your injuries are minor or life-altering, a Kentucky bus accident lawyer can help you get the compensation you need

A bus is a vehicle, just like a car or truck. That means a bus can get into an accident that leads to injuries for passengers, occupants of other vehicles, or pedestrians.

The 2019 Traffic Collision Facts report issued by the Kentucky Traffic Data Services shows that out of 241,515 vehicle collisions that year, there were 390 school bus collisions and 12,240 collisions involving other types of buses. Of those, 1 of the school bus accidents and 5 of the other bus accidents resulted in fatalities.

Facing factsThere were 39 school bus collisions that resulted in injuries in 2019. Of those, 71 people were injured. The 2 primary causes of these accidents were inattention and the driver misjudging clearance.

Riding a bus in Kentucky

Cities and towns everywhere rely on bus transit for many of their residents, commuters, and tourists. There are lots of reasons why people choose to ride buses. They are usually convenient, riders can relax and not have the hassle of driving themselves, and you don’t have to worry about gas or parking (or other expenses related to driving a car daily) or traffic.

The Transit Authority of Northern Kentucky (TANK) offers bus service from the suburbs to downtown Cincinnati (Ohio), as well as Boone, Campbell, and Kenton counties. TANK has a fleet of 100 fixed route buses and 25 on-demand vehicles. The company provides rides to more than 3 million passengers in an average year.

The primary bus transportation service in the Louisville metro area is Transit Authority of River City, or TARC. TARC has 227 buses and 2,000 bus stops throughout the area.

There are also smaller bus services and private bus services that provide transportation outside the urban centers.

There are also private bus transportation services like Greyhound, Peter Pan Bus Lines, and others, like charter bus companies for longer distances or inter-city travel. A charter bus is rented by a team, organization, or group of people who are traveling together.

School buses are different from other types of buses because they’re designed to be safer. There’s a reason why school buses are yellow. They are highly visible and, unlike other kinds of buses, they have flashing red lights and stop-sign arms. School buses are also equipped with protective seats designed to cushion children in a crash, high crush standards, and rollover protection features.

Enjuris tip:A school bus distributes crash force differently from cars or trucks. The seats on a school bus provide “compartmentalization,” which protects passengers in the absence of seat belts. The bus seats are strong, closely spaced, and include energy-absorbing seat backs.

Who is liable for a Kentucky bus accident?

Unfortunately, that’s a question for a lawyer.

A bus accident is complicated because there’s potential for several defendants (liable parties) in a lawsuit.

Let’s look at a few scenarios:

If you’re a bus passenger, it’s unlikely that you had a role in causing an accident. But that doesn’t mean you’re always going to receive full compensation. For example, if there were empty seats on the bus and you chose to stand, the court could reduce your damages because your actions contributed to your injuries because standing while the bus was in motion is more dangerous than being properly seated.

If you’re a pedestrian, cyclist, or another driver who is involved in a collision with a bus, liability will be determined the same way as in any other car accident. Lawyers, insurance companies, accident reconstructionists, and other experts will review the evidence and determine how the accident happened and who was at fault.

Depending on the nature of the accident, possible defendants could include:

Enjuris tip:Kentucky follows a pure comparative negligence standard. Under this rule, damages recovered by a plaintiff will be reduced according to the plaintiff’s percentage of fault. That means if you had any liability, even if you didn’t cause the accident, your damage award could be reduced.

Common carriers are held to a higher standard than other types of businesses because of the nature of the industry. Transportation can involve risk, and these companies have a duty to keep passengers safe.

A bus accident can happen in a variety of ways, but here are some of the most common causes:

10 tips for staying safe before, during, and after your bus ride

Do you need a bus accident lawyer?

If you were injured in a Kentucky bus accident and you’ve incurred financial costs as a result, you might be able to recover damages (money) to cover your expenses.

If you were seriously injured, you can receive compensation for costs that include:

The Enjuris law firm directory can help you find a Kentucky bus accident lawyer near you who can navigate the legal system and recover compensation for your losses.