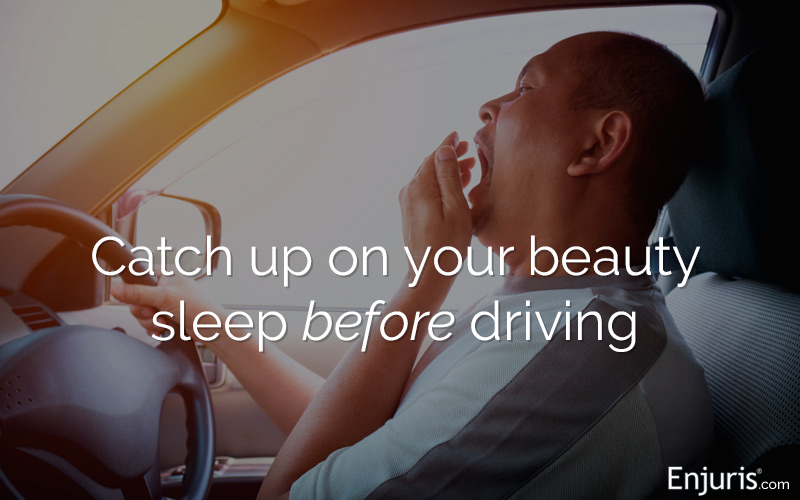 Even if you’re not, you might be familiar with the legendary Ferris Bueller and one of his most famous lines: “Life moves pretty fast. If you don’t stop and look around once in a while, you might miss it.”

It’s possible that our lives today move even faster than what Ferris and his friends experienced back then. We all try to balance hard work, free time, family and friends, and other obligations. But sometimes that means pushing ourselves hard without a break.

If you’ve ever driven a car or truck while drowsy, you should know that it’s extremely dangerous. The Centers for Disease Control and Prevention (CDC) define drowsy driving as:

“...The dangerous combination of driving and sleepiness or fatigue. This usually happens when a driver has not slept enough, but it can also happen because of untreated sleep disorders, medications, drinking alcohol, or shift work.”

Part of what makes drowsy driving so dangerous is that we don’t know exactly when we fall asleep. You can feel tired, but you’re not aware of actually going from being sleepy to actually asleep.

Even if you’re tired but not actually about to fall asleep, drowsiness affects your driving by:

Most of us would never drive drunk. We know the risks, we understand the consequences, and we’d never put ourselves or someone else in harm’s way. But some of us have driven drowsy, accepting it as part of our busy lives or jobs.

The accident risk for drowsy driving is the same as driving drunk.  Tweet this

According to a study conducted by AAA, researchers found dramatic increases in the likelihood of having a crash depending on the number of hours a person slept in a 24-hour period: 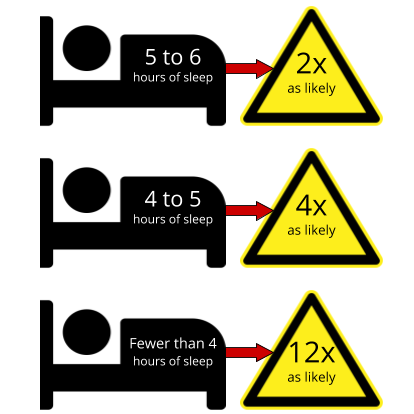 Drowsy driving accidents can happen anywhere, but they are especially common on rural roads and interstates. Here’s a map of the most dangerous interstates in the U.S. with the highest percentage of reported sleep-related driving fatalities: 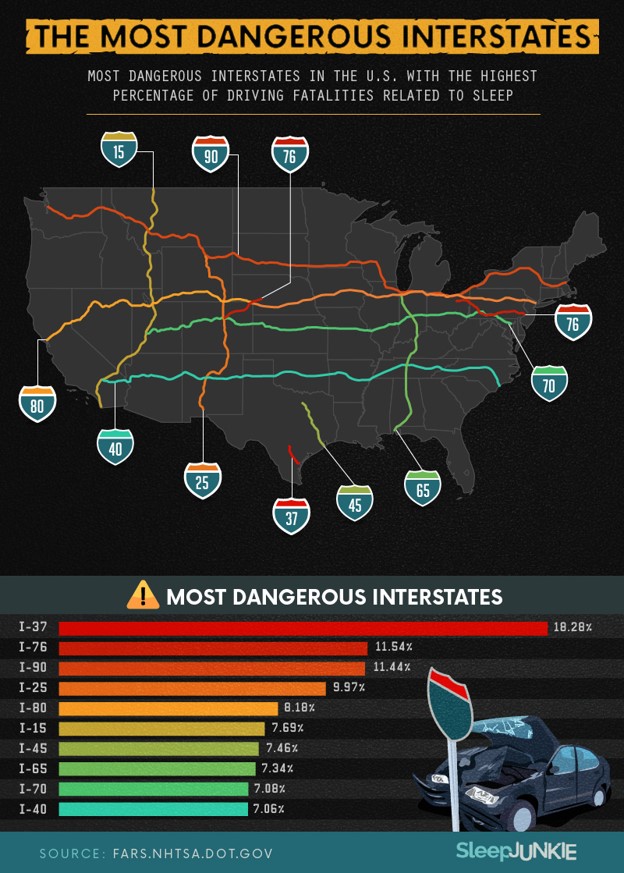 Here are some other surprising drowsing driving facts from the National Safety Council:

Although these are reported figures, a lot of crashes caused by drowsy driving are not reported that way. It can be difficult or impossible to know if an accident is the result of a driver falling asleep at the wheel. Therefore, the actual numbers of drowsy driving accidents could be far higher than what’s reported.

We all feel tired sometimes.

But when are you too tired to be behind the wheel?

These are some red flags that indicate you’re probably too tired to drive:

If you become aware that you’re experiencing any of these signs, you should pull over as soon as you can do so safely. A 20-minute nap might be enough to wake you up enough to get you to your destination. Lots of people also try a cup of coffee or other caffeinated beverage to keep themselves awake.

For a lot of people, their primary destinations are either to or from work — and many people routinely drive as part of their jobs, whether their job actually is driving (like a truck driver, delivery driver, bus driver, etc.) or being at a variety of job sites is one of their daily tasks.

Shift workers are at the highest risk for fatigue, especially if they work a night shift, many hours at a time, or rotating or irregular shifts.

Our bodies are biologically programmed for sleeping at night, so when a worker is on duty at night, it’s harder to adjust to when they must be awake or asleep.

Shift workers also tend to have more difficulty getting the recommended 7 to 9 hours of sleep per 24-hour period.

Truck drivers are especially at risk for drowsy driving. Federal regulations require that truckers not exceed a certain number of hours behind the wheel and that they can only drive for so long without breaks.

Still, some trucking companies make it impossible for a driver to reach a delivery destination in the amount of time allotted without exceeding these limits. Drivers often drive more hours and with fewer breaks than is required in order to meet their deadlines.

Who’s most at risk for a drowsy driving accident?

Everyone is tired from time to time, even those of us who regularly get enough good quality sleep. But there are some people who are more at risk based on their jobs, lifestyles, or other conditions:

Young men have been shown to make lifestyle choices that can make them more tired. This might include staying up late, drinking alcohol (even if they’re not actually drunk while driving), working long hours, and engaging in other high-risk behaviors.

2. Adults who regularly don’t get the recommended amount of sleep

Adults should get 7 to 9 hours of sleep on a nightly basis. When they don’t, they go into “sleep debt,” which is when they’re not getting the amount of rest their body needs to function well. When this happens night after night, the human body goes into “cumulative partial sleep deprivation.” This results in severe sleepiness, and their attention and performance will begin to suffer — including the ability to drive safely.

3. Drivers who are awake for a long time

Whether you’ve been up all night because you’re a doctor performing emergency surgery or a parent who was awake with a colicky baby, you shouldn’t drive if you’ve been up for too many hours. This is known as “acute sleep deprivation.” A driver who has been awake for more than 15 hours is much more likely to cause a crash.

There are a lot of medications — even over-the-counter drugs — with warnings on the packages indicating that you shouldn’t drive or operate heavy machinery while taking the drug, or that drowsiness is a side-effect.

This is especially common for:

If you’ve taken any kind of medication, whether it’s prescribed by your doctor or over-the-counter, always read the package or insert to find out whether drowsiness is a side-effect. You can also ask the pharmacist.

If it’s a drug that could cause drowsiness, find out how long the drug is supposed to stay in your system and time your dose so that you won’t have to drive during that time.

You might think the reason why you’re tired a lot is simply that you lead a busy life — and maybe that’s true. But some drowsy drivers experience medical sleep disorders and they don’t even know it.

The most common sleep disorders are insomnia, obstructive sleep apnea (OSA) and narcolepsy.

If any of these symptoms or conditions seem like something you regularly experience, visit your doctor to see whether they think a sleep study or other diagnostic procedure might be necessary for you.

How to prevent drowsy driving

Ultimately, there’s one person who controls your driving: YOU. And while life sometimes throws the unexpected your way, taking precautions to ensure that you only drive when you’re well-rested enough to do so can save your life (or someone else’s life).

Here’s what experts at the American Academy of Sleep Medicine recommend in order to avoid drowsy driving:

Enjuris tip: Taking a short nap after consuming caffeine will maximize its effect and give you a short boost if you’re tired.