Accident Help (Home) » Injury Blog » Help! I’ve Been in a Car Crash with No Witnesses. What Now? 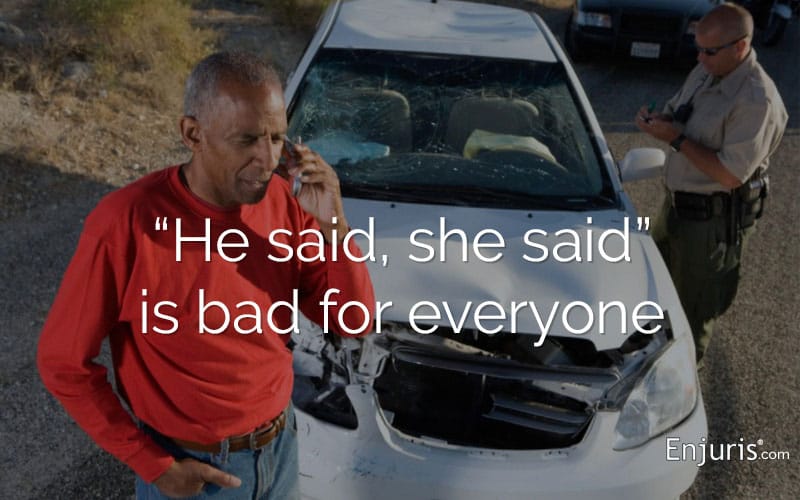 Eyewitnesses can be very helpful to determine what really happened after a car accident. If you’ve been involved in an accident, having an eyewitness can also be important to helping you recover for any injuries or damages you may have suffered.

Sometimes, however, accidents occur and there are no witnesses other than the people involved in the accident. It may quickly turn into a he said/she said arguing match when the police arrive at the scene.

Even if there were no other witnesses, a lawsuit can be filed and recovery obtained in certain accident cases. You still may have a claim and be able to recover for any injuries or other damages you sustained because of the accident.

In short, regardless of the lack of witnesses, there are still steps you can (and should) take to support your claim.

After any accident, the first thing you should do call 911 and notify police. Let the dispatcher know if there are any injuries. If you’re injured, wait for help to arrive. Most importantly, DO NOT leave the accident scene, as this is a crime in most states and would constitute a hit and run.

When the authorities arrive, follow their instructions and answer their questions as truthfully as you can. In cases where there are no witnesses to corroborate what happened, police officers are supposed to serve as neutral, unbiased investigators. The police report must include a statement from both you and the other driver, so try to describe what happened as clearly as possible.

Under no circumstances should you admit fault or apologize for an accident, even if you suspect you may have been at fault as this can be used against you to pin the blame on you and reduce your shot at compensation.

Also, find out when the police report will be available and be sure to obtain a copy. Such reports can be used to preserve details of the accident and determine who the authorities believe was at fault based on evidence found at the scene such as skid marks, driver interviews and other factors.

Enjuris tip: Find out what to do if there was no police report.

If you’re physically able to, take pictures and video of the accident scene before you leave.  If you’re hurt and unable to photograph the scene, ask your passenger to or call nearby a family member or friend if possible.

Over time, the scene can be changed and important details or evidence could be lost. If you have a good, quality camera or smartphone, use that to take the photos and video. Be sure to get several different angles and locations, both close-up and wide-angle views. Include landmarks such as road signs, traffic signals or telephone poles. If there are any skid marks on the road, be sure to get a picture of them, too.

When you have taken plenty photos and video, remember to make a backup copy on a memory card or other device.

Ask to exchange license information with the other driver. Be sure to write down and/or take pictures of their name, address, license number, insurance company and policy number. Always check to make sure their license or insurance information is valid and not expired, as this could swing liability in your favor.

If the other driver is unlicensed or uninsured (or if you don’t), then you’ll need to tell the police and let them handle it.

You’ll also want to let your car insurance company know about the incident pretty soon afterwards since it’s likely that the other driver will file a claim with their insurance company. Typically, in these situations, both drivers file claims because they think the other person was to blame. Failing to inform your insurance company may make you look more guilty, so be sure to notify them as soon as possible.

In the hours and days after the accident, you’ll want to seek medical treatment for any injuries you may have suffered. Even a seemingly minor car accident can be traumatic to the body. Some types of injuries don’t initially cause any pain other problems, but can later deteriorate and become a major health issue.

Even if you aren’t feeling any pain or discomfort or don’t feel that you were injured, you should schedule an appointment with your doctor. Seeing a doctor as soon as possible can help determine if you have sustained any injury, prevent any injury from getting any worse, and can start treatment to put you on the road to recovery.

Step 7: Write down your version of events

If you spoke to anyone else involved in the accident, write down what was said. Try to record as accurately as possible what you said to the other person and what the other person said to you.

Writing down your version of events will help clarify in your mind how the accident occurred and can also be used later to refresh your recollection.

If you believe you may have a case or if the other driver is trying to get compensation from you even though the accident was their fault, contact a personal injury attorney as soon as possible. Most law firms provide a free initial consultation to review your case. Although you may have time before any lawsuit would have to be filed, meeting with an attorney soon after your accident can be vital.

Accidents with no witnesses can be difficult to prove since both drivers may blame the other. Such cases can quickly turn into a “he said, she said” arguing match with no third-party witnesses to support one driver’s story. Fortunately, there are other ways to determine who was at fault for an accident such as the police report, accident reconstruction, photo evidence, etc.

An experienced car accident attorney can review your case to determine if you have a good claim. They’ll also know the steps to take to preserve your claim, conduct any further necessary investigation and, more importantly, provide you with the legal advice you need in your specific situation to help make your case successful.

During the initial meeting with an injury attorney, you bring your description of the accident, your record of anything that was said at the accident scene, any photographs or video you took, and any other documents you have concerning the accident.