Accident Help (Home) » Injury Blog » Can Someone Sue Me for a Car Accident If I Don’t Have Insurance? 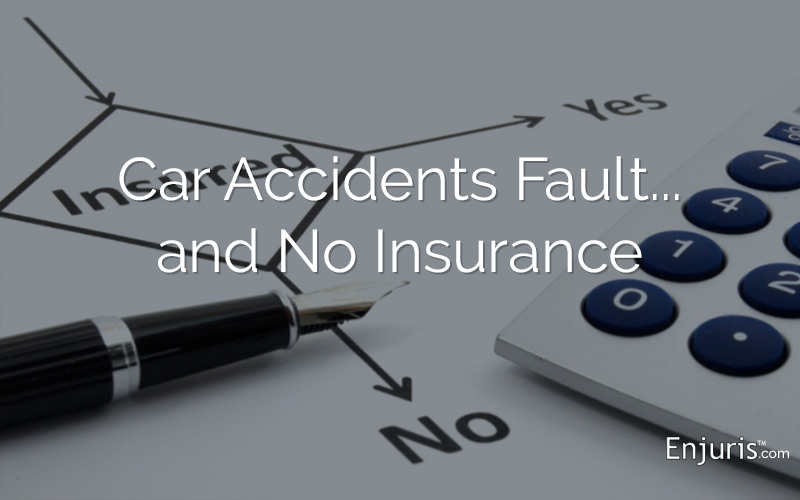 Driving without insurance is a high-speed game of Russian Roulette. You might not lose the game on your first try, but keep trying and eventually you will.

As of 2015, the most recent year for which statistics are available, it was determined that one in eight American drivers doesn’t have automotive insurance. Florida has the highest rate (more than one in four drivers — an astonishing 26.7%) and Maine has the lowest (4.5%).

So what’s a driver supposed to do if they don’t have insurance, but are still at fault for an accident?

What happens after you’re in a car accident will be determined by whether you live in a fault state or no-fault state. Fault states are also called “tort” states.

The majority of states follow this system, which allows drivers to sue each other for damages. Should you be found at fault for an accident, the other driver can file a personal injury lawsuit and seek financial recovery for medical bills, lost wages, pain and suffering, property damage, loss of consortium and more.
You might be out of luck without an auto insurance policy.

Enjuris tip: If you’re at fault for a car accident and judgment is entered against you (and most importantly, you don’t have insurance), you will be expected to pay damages... even if it’s paid out of pocket or taken from your wages.

If you don’t have insurance, you will be held personally responsible for any judgment entered against you. As in, you have to pay it. Not your insurance company, not the government — you.

It won’t matter to a judge that you don’t have the money to pay it; if you’re found liable for the accident, a court might decide to take the compensation from your wages or install weekly payments.

Twelve states, along with Puerto Rico, currently follow the no-fault car insurance system. This means that in the event of an accident, both drivers are expected to seek damages from their respective car insurance policies. This applies even if you’re at fault for the accident.

For an injured driver to sue you, they would have to step outside of the insurance system and file a personal injury lawsuit against you. This can only happen in special cases where injuries are classified as “significant” or “serious,” which typically have a minimum threshold of $20,000 in medical expenses.

If someone with grievous injuries sues you personally and you don’t have an insurance policy, expect to pay those damages yourself. That means out of your bank account, not your insurance company’s coffers.

Many states have instituted laws and regulations to keep drivers off the road unless they have an insurance policy. This includes penalties for driving without insurance, suspending licenses or jail time. The Consumer Federation of America has a comprehensive state-by-state breakdown of repercussions of driving without car insurance.

Other states have “pay-to-play” policies, which state that an injured driver cannot recover damages for pain and suffering unless they are covered by insurance. This applies even if the driver wasn’t at fault for the accident. Eleven states currently have some sort of pay-to-play policy:

You should always have a car insurance policy. It’s that plain and simple.

What if you have serious injuries and medical bills, but you can’t recover against anyone? An underinsurance policy allows you to recover enough to pay what you owe and stay financially solvent.

Were you found to be at fault for an accident, but didn’t have sufficient insurance coverage? What happened? Let us know in the comments below.