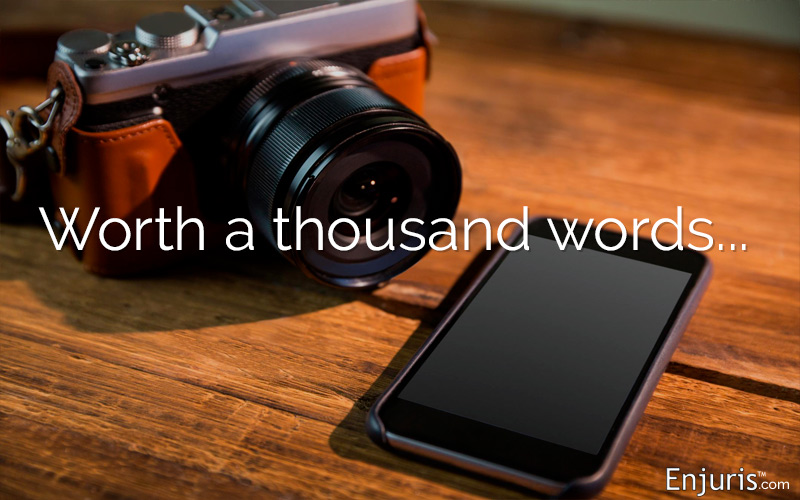 Many of us spend time in a car almost daily, which means it’s inevitable that most people will eventually be in a car accident. If you find yourself in that situation, the first priority is to check on the condition of the people present in all involved vehicles. Immediately call for emergency medical services as needed and contact the police.

While you’re waiting for the police to arrive, taking accident scene photos can be a huge help for making an insurance claim or building your legal case. However, you should only do this if you’re not physically injured and if the scene around the accident is safe enough for you to take pictures without putting yourself (or others) in danger.

Why is accident scene photography important?

Accident scene photography is important because, besides eyewitness accounts and a police record, it might be the only reliable evidence that can be collected from the scene.

As soon as each of the people involved in the accident is accounted for and emergency services are on the way, the second priority should be taking accident scene photos. You might not know in the moment if you will make an insurance claim or pursue a lawsuit relating to the crash, but it’s a good idea to collect as much evidence as possible, just in case. Also, if you end up being sued or if the other driver makes a claim against your insurance company, the photos could be helpful for you to have.

Even if you suspect that the collision was your fault, accident scene photography can show certain conditions that might lessen your liability. A set of photographs is one way to have an indisputable record showing the positions of the vehicles, the weather, and other important factors that might seem insignificant to you at the time but that could be very important as part of a legal case down the road.

Often, a person’s memory becomes unreliable after being involved in a car accident. Sometimes, this could be because of a head injury. Other times, because the accident is traumatic, the person may be unsure of what to do.

There are many other stressors involved that can affect how a person mental processes the situation. That’s why photos can help you to reconstruct what happened and preserve certain details that might be fuzzy in your memory.

Enjuris Tip: In addition to taking photos, consider writing down what you remember about the accident as soon as possible. Use our free post-accident pain journal to document these details before they’re lost from memory.

The best time to take photos of an accident is immediately after the crash, before police arrive. The closer you can capture the exact position of the cars and have your images document the specific conditions surrounding the collision, the more helpful your photos will be as evidence.

(As mentioned earlier, only do this if it is safe and there isn’t danger from oncoming traffic.)

As you begin taking accident scene photos, there are several things to keep in mind to ensure the images are useful for eventual insurance or legal purposes. Many of us today enjoy the well-composed, artful images commonly found on Instagram or other social sharing platforms. You may enjoy playing with filters and using other tricks to make your images more visually appealing. As tempting as that habit might be, resist the urge to compose accident scene photography the way you would for social sharing — the purpose of these photos is to show the facts of the scene, exactly as they are.

Here are a few tips to keep in mind as you take accident scene photos:

When an accident happens, the most important thing to remember is to stay safe. If you’re injured, do what you need to do to take care of your injuries, or wait for emergency personnel to help you. If it doesn’t feel right to be walking around and taking accident scene photos because you’re lightheaded, unsteady on your feet, or for any number of reasons, then don’t.

There are likely to be bystanders, police officers, or perhaps uninjured passengers who can take photos. If someone you don’t know is taking pictures, give that person your phone number and email address so that they can send you the photos (if you’re able to write down their contact information, that would be even better).

Knowing that accident scene photography can be crucial to a successful insurance claim, defense, or legal case already puts you ahead of the game. Many people won’t think of this important step in the moments after an accident, so be sure to share your knowledge with friends and family.

You never know when you or someone you love will face the unexpected, and the more prepared you are, the better off you can be in the long run.