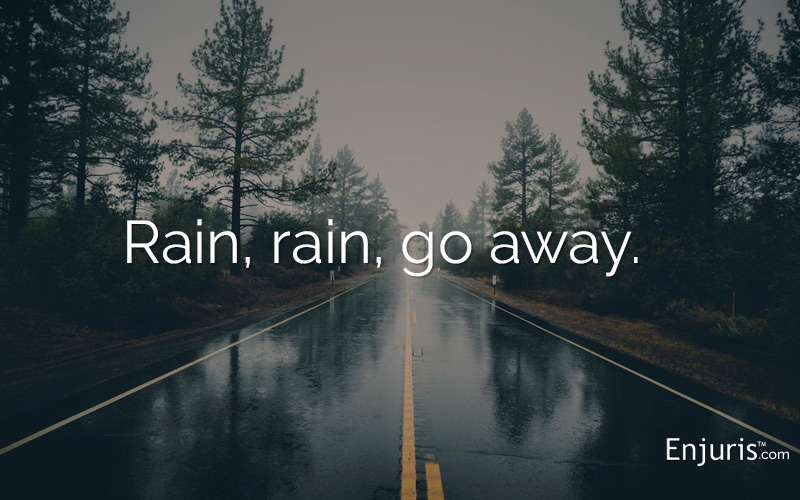 According to the Department of Transportation, approximately 21% of car accidents in the United States are related to bad weather.

Though you might want to, you can't sue the weather. So, who's responsible when a car accident is caused by bad weather?

How does bad weather cause car accidents?

Table of Contents + show
How does bad weather cause car accidents?
So who is at fault when a car accident is caused by bad weather?
What is reasonable when driving in bad weather?
Proving weather conditions after an accident
Comparative Negligence

When most people think about bad driving conditions, they think about driving through a snowstorm or over ice. But in fact, the data shows that most weather-related accidents are caused by rain.

While Florida drivers don't generally have to worry about snow, Florida ranks 5th when it comes to states that receive the most rainfall per year. Rain can impair a driver's visibility and reduce the amount of friction between the car's tires and the road, which may result in hydroplaning.

So who is at fault when a car accident is caused by bad weather?

Negligence is the failure to exercise reasonable care when driving. The term “reasonable care” is defined as how a “reasonable” person would behave in the same or similar circumstances.

What is reasonable when driving in bad weather?

Whether or not a driver behaved reasonably is not limited to the driver's actions while driving, but also includes their actions before getting into the car. For example, failing to do any of the following before setting out on the road might be enough to show that a driver acted unreasonably depending on the weather conditions:

Proving weather conditions after an accident

Let's say you're involved in a car accident with another vehicle during a downpour and the other driver was going the speed limit. You'll want to provide the insurance adjuster (or the court) with proof that there was in fact a downpour at the time of the accident. This can be done by providing the relevant:

Enjuris tip: Certified weather data for use in litigation is available only through the National Climatic Data Center.

Keep in mind that more than one driver can be found at fault for an accident. For example, if you're driving in a rain storm and collide with a car that has a broken taillight, but you were following the car too closely, a court might determine that you were both partially at fault for the accident.

Florida follows pure comparative negligence, which means that your recovery will be reduced in accordance with your percentage of your fault. If you're a victim of a car accident in Florida, consider talking to an experienced attorney. In Tampa and Clearwater, look no further than our personal injury law firm. We offer free case evaluations to clients like you. Contact us today if you need help.

We are an award winning law firm in Clearwater, specializing in a wide range of personal injury cases — from car accidents to nursing home abuse to wrongful death and pedestrian/bicycle accidents. George Tragos, Peter Sartes, Peter Tragos and their highly skilled legal team fight hard to ensure you get what is deserved due to the negligence of another.

Have you driven in bad weather in Florida? What tips do you have for other drivers?