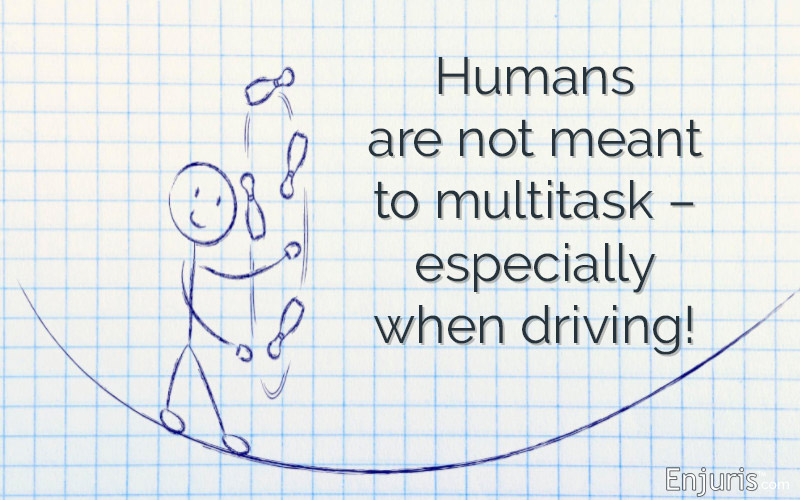 If you're texting while driving, you are not looking at the road.

By the way, do you know how long it takes even a focused driver going 55 miles per hour to come to a complete stop?

Almost the length of a football field.

If there were a person in front of your car and you weren't paying attention, do you think you'd stop in time?

Would you bet that person's life on it?

Florida is the second-worst state in the country after Louisiana for distracted driving. This is likely because talking on a cellphone is a secondary offense for which police cannot pull you over; drivers must be committing some larger offense.

Florida is only one of five states for which texting while driving is a secondary offense.

Meanwhile, there were more than 45,000 distracted driving crashes in Florida last year, claiming the lives of almost one person a day.

Studies completed in Texas discovered that almost 10% of drivers on the road are on their phone right now.

Furthermore, one in four car crashes involves a distracted driver.

Transportation researcher Christine Yager wanted to see if voice-to-text software was really safer than those who tried to send a quick text while stopped at a red light. This was what she found:

Also, the Insurance Institute for Highway Safety has linked talking on a cellphone while driving to a fourfold increase in the chance of a crash.

Florida has enacted distracted driving laws to reduce accidents, but they are not as strict as other states and are secondary offenses, which mean that cops cannot pull over drivers unless they are committing a more serious crime. Meanwhile, it's not illegal to make or receive a phone call while driving.

Opponents of making distracted driving a primary offense in Florida have said that it's too much government intrusion.

Distracted driving is generally defined as the following:

Anything that takes your eyes off the road and your hands off the wheel is distracted driving.

What if I get hit by a distracted driver?

It's chilling when investigators dig through the wreckage of a car and find a cell phone still playing video.

In that link, the car was almost torn in two.

For some reason, people have become desensitized to the dangers associated with driving. We respect other vehicles, but cars are commonplace. Even though cars are gigantic metal cages that can turn on you in an instant, drivers feel in control at all times – enough to eat, put on makeup, change clothes or even read emails while behind the wheel.

Perhaps it has something to do with today's culture and this “FOMO,” or “fear of missing out” – nobody wants to be the last one in on a joke or gossip.

Everyone has to know everything going at every minute of the day. Others think their bosses will get upset if they aren't immediately available. Many individuals are anxious if they don't answer a text or call right away. For some, it's even a dopamine release if the message is pleasant.

But what does it result in? Car crashes. Injuries. Sometimes even death. This can mean teenagers – teenagers who were just texting, something so small and inconsequential – being responsible for the death of someone else, and they will have to carry that burden for the rest of their lives.

Distracted driving can cause a variety of different injuries:

If you get hit by a distracted driver, don't panic. First make sure that everyone is okay. Then:

Either way, it makes most sense to speak to Florida attorneys who have dealt with these matters before. Try the Enjuris law firm listings in Florida to find an attorney who is well versed in both motor vehicle law and traffic statutes.