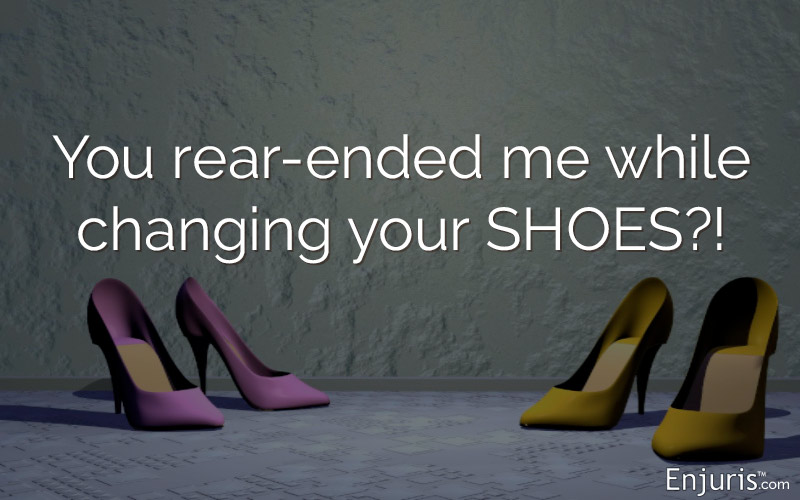 After being rear-ended twice by distracted drivers, one woman shares her lessons learned

Table of Contents + show
After being rear-ended twice by distracted drivers, one woman shares her lessons learned
Medical and emotional fallout
Long-term effects of the car accident on home and work
Learning the legal process
Then another careless driver causes havoc
“I’ve become a nervous driver - I was never like that before.”
Advice for other victims
See your recovery through

As you feel the impact of your car being hit from behind, you may think that poor weather conditions, alcohol or maybe even texting are the cause. It probably wouldn’t occur to you that the other driver was changing her shoes at the time she hit you! But that is exactly what happened to Stacie Burgess approximately four years ago.

As she was leaving work one day Stacie was stopped at a red light in typically heavy Washington, DC rush-hour traffic. Out of the blue, she felt her car lurch forward. After the car stopped, she looked behind her and saw a woman jumping out of her own car and coming towards her. 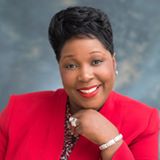 Stacie Burgess is a busy communications professional whose life was turned upside down by two crazy car accidents.

“I just remember thinking; I can’t believe she just hit me!” Stacie said. She was in for even more of a shock when she heard the woman’s excuse:

“I asked her what happened, and the woman told me that she was changing her shoes as she turned out of the parking garage! I couldn’t believe it!”

While the circumstances of the accident were almost laughable, the medical, emotional and logistical fallout that Stacie faced were not.

After getting over her initial shock and anger, Stacie called 911 to file a police report and get medical attention.

“I asked her what happened, and the woman told me that she was changing her shoes as she turned out of the parking garage! I couldn’t believe it!”

The police interviewed the woman who hit her, who admitted fault and that she was changing her shoes at the time. “I couldn’t believe that was actually written in the police report,” Stacie said.

While waiting for the ambulance, Stacie could feel her neck stiffening up and started to feel emotional about the whole incident.

“I was nervous to ride in the ambulance by myself; it was the first time I had ever been in an accident. I was upset as well, because of the carelessness of the other driver,” Stacie said. “I was angry and in pain.”

Stacie suffered from whiplash, which caused her severe pain in her neck and upper shoulder.  While there was no bloodshed in the accident, people really underestimate the impact a rear-end collision accident has on the human body, Stacie said.

The pain started settling in more that evening and became intense and constant for about four weeks. She had to do physical therapy for several months and had difficulty sleeping and sitting at her desk at work for long periods at a time.

Stacie’s neck and upper shoulder area would even stiffen up in cold weather. “I used to think that was an old wives’ tale, but it is true!”  Even a year or so after the accident, Stacie could still feel residual pain.

Long-term effects of the car accident on home and work

As director of communications and external affairs at a national nonprofit, Stacie has a demanding job and busy schedule, and the accident proved to be a major inconvenience.

“I had a very understanding boss and co-workers, and I did as much as I could for as long as I could, but there were time periods that I had to shut down.”

Enjuris Editor Kim Hayes formerly worked with Stacie, and saw her struggle during this difficult time. "Stacie is very dedicated to her job and at her professional level the work just never really stops. We all tried to pitch in, but I know she still struggled to balance the need to take time to heal and her responsibilities.”

Stacie’s doctors ordered her to work limited hours for the first three to four weeks after the accident. “I stayed focused on my recovery, but I was anxious about falling behind at work and letting people down.” 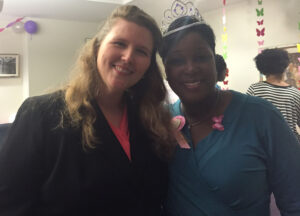 Stacie also faced the process of dealing with an accident claim for the first time. She contacted a lawyer after the accident who specialized in this area and who worked closely with the insurance companies to settle the case.

“Dealing with a seasoned and knowledgeable law firm was critical,” Stacie said. You don’t know what to do when it is your first time in an accident.”

Stacie was satisfied with the settlement and her medical costs were either covered or reimbursed. She kept careful records and receipts of all her appointments.

Then another careless driver causes havoc

Finally recovered from her first accident, Stacie found herself hit by a careless driver yet again in October 2016.

“This time I was headed to work in the morning and I was excited to get there early and get things done,” Stacie explained. “About 10 minutes away from my job, sitting in rush hour traffic, I was again rear-ended!”

“About 10 minutes away from my job, sitting in rush hour traffic, I was again rear-ended!”

When Stacie got out of the car and asked the young man why he hit her, he replied:  “It was a long light and I nodded off at the wheel!”

Stacie tried to call the police as she had in her first accident, but they informed her that Washington, DC is now a no-fault jurisdiction and police do not respond unless there is a serious injury, or the other driver refuses to exchange information. She did however call back and insist that they respond upon learning that the driver was driving with a provisional learner's permit with a toddler in the car.

Stacie didn’t require an ambulance at the accident scene, but immediately drove to the hospital to get checked out as she was a little lightheaded and felt pain and stiffness in her neck.

Since the accident, she has once again faced severe pain in her neck and upper back area and is participating in physical therapy.

She can’t sit up for long periods of time without being stiff, and can’t drive for more than an hour at a time. She takes muscle relaxers to help with the pain, but they cause her to fall asleep early, making it difficult to catch up on work missed when she has physical therapy during the day.

“It is tough, I have a really busy job and the stress is impacting my injury even more. Recently I had to work two 12-hour days straight,” Stacie said. “With that kind of friction on my body, I couldn’t move the next day. It was just medication and bed.”

Stacie is a very family-oriented person and after both of her accidents she couldn’t be as active with them as she liked, missing out on holidays and play time with her 3-year old granddaughter.  She is grateful though that her husband and entire family have been so supportive throughout her recovery. 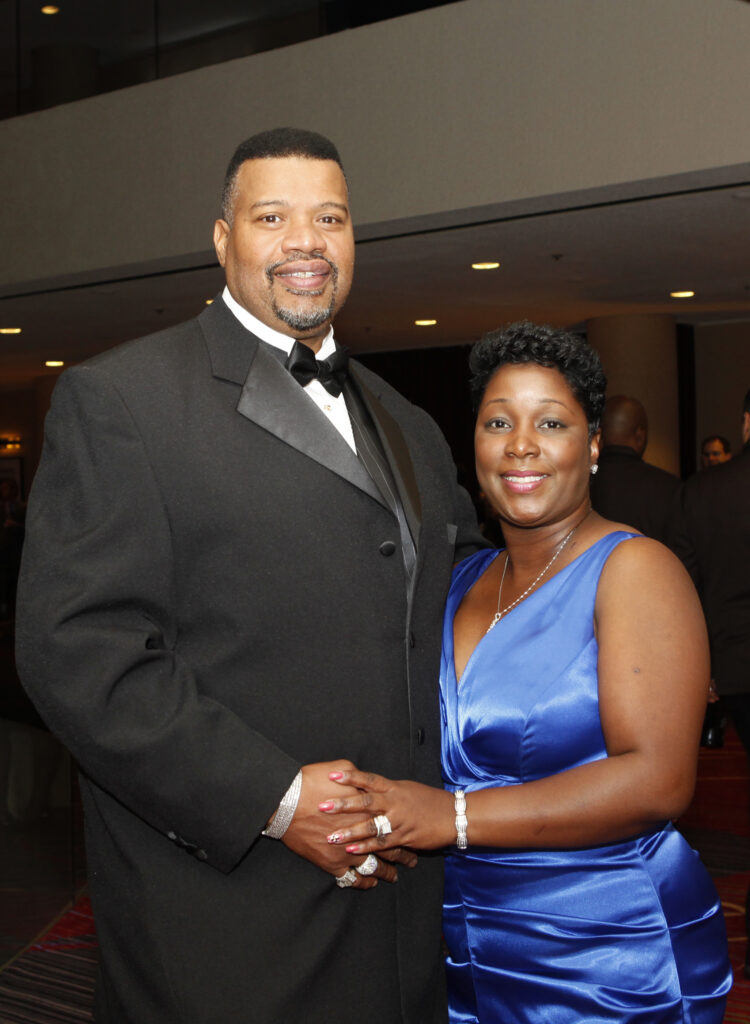 Stacie and her husband Johnney Burgess, who was very supportive of her after both of the accidents.

“I’ve become a nervous driver - I was never like that before.”

The accidents have also left her with emotional scars.

“I am a paranoid driver now, I look in the rear and side view mirrors constantly.”

“I am a paranoid driver now, I look in the rear and side view mirrors constantly,” Stacie said. “I’m overly concerned when people are getting too close to my car and I have panic attacks when the cars are coming up too fast.  I’ve become a nervous driver and I was never like that before.”

Having other people in the car with her makes it even worse. “I find myself looking around a bit more to make sure that everyone else is going to be okay. It stays with me constantly,” Stacie said. “Immediately after the second accident I would just ask my husband to drive sometimes because I was nervous.”

Advice for other victims

Having been through an accident experience already, Stacie was more prepared the second time around. She used the same law firm from her first accident and again the settlement is moving smoothly, in part because the other driver admitted fault.

Through dealing with two accidents, Stacie has learned many tips on how drivers can be better prepared in case they are hit. She suggests:

Stacie also recommends contacting family members immediately after an accident if you can.

“Suppose I had blacked out or got to the hospital and it was worse than I thought it was,” Stacie asked. “You just never know if you have experienced some injury that could be life threatening.”

She also recommends being aware of how you have personal items arranged in your car. For one of the accidents she had coffee in the cup holder, which spilled everywhere. Her purse was open in the passenger’s seat with her phone exposed. Luckily it was not damaged, but she realized that it could have been far worse.

See your recovery through

The most important tip Stacie offers is to take your recovery very seriously. She still has one trouble spot causing her pain from the second accident and she will stay with physical therapy until she is 100%.

“Until your physician and physical therapist have cleared you, stick with it, even if you are feeling a little better,” Stacie said. “It is sometimes inconvenient to schedule, but it is so important to stay committed. Don’t rush the healing process.”

Stacie’s advice to other drivers who may be following her on the roadways: “Don’t take off your shoes while driving and stay awake!!”

And Stacie’s advice to other drivers who may be following her on the roadways:

“Don’t take off your shoes while driving and stay awake!!”

Have you been rear-ended by a careless driver? How did the healing process go for you? Share your story below.