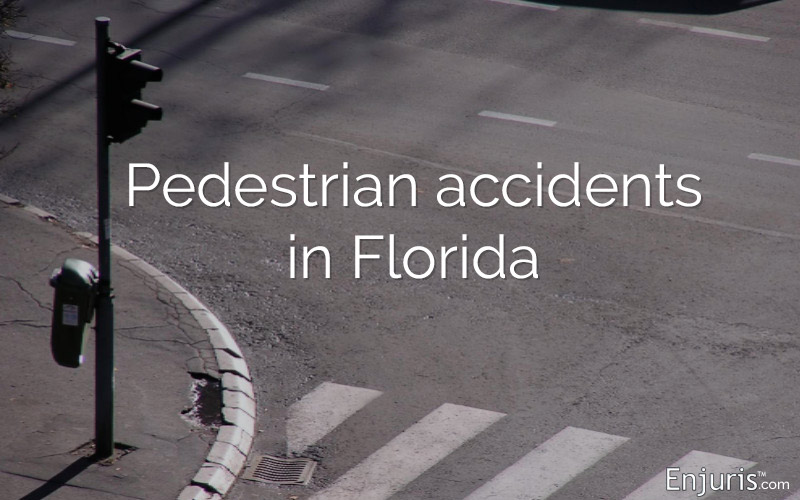 The hazards of crossing the street in Florida

Table of Contents + show
The hazards of crossing the street in Florida
Right of way laws for Florida pedestrians
Why pedestrian accidents happen
Types of pedestrian injuries
Fault in Florida
Helpful resources to help you hire the best Florida personal injury lawyer
Crosswalks can be hazardous to your health if drivers aren't paying attention. Conversely, if you are an attentive driver and a jaywalker darts into traffic, your life can change in an instant. Have you been hit by an inattentive driver? Learn more below and talk to a Florida attorney right here.

Nobody expects to go for a walk and get hit by a car, but it does happen – quite frequently.

In Florida, pedestrian accidents happen more frequently at night (visibility is always a factor) and in cities more often than in rural areas.

However, in cities, pedestrian accidents do not happen most often in intersections, like one might assume; they tend to happen on sidewalks, in crosswalks, or on the side of the road. These injuries can be overwhelming or fatal.

The driver may be held liable for damages in a negligence case, which could include:

The injured plaintiff would have four years from the date of injury to bring a personal injury case (two years for wrongful death). Let's take a look at Florida pedestrian laws in detail.

According to the state's pedestrian laws, walkers must obey any official traffic control device unless otherwise directed by a police official. A device would include traffic signs, signals or pavement striping.

Additionally, if a sidewalk is readily available, pedestrians should not use the roadway. If sidewalks are not available or are under construction, however, they should use the shoulder on the left side of the roadway facing traffic.

When crossing the roadway, pedestrians are:

There are more rules, but they are very particular ("no pedestrian may jump or dive from a publicly owned bridge," for instance, and no person shall hitchhike on a public Florida street).

Enjuris tip: Pedestrians must obey traffic signals, signs and markers except when a police official tells them otherwise.

When new drivers complete Driver's Education classes, they are focusing on the cars – oftentimes, they neglect to think about the pedestrians and the various pedestrian laws that are in place to protect them. The most that Driver's Ed focuses on is "Don't Hit That Person."

This can lead to forgetting about those laws later on when they are driving, or driving in a reckless fashion. Some of the more common reasons for these accidents include:

Enjuris tip: If you are walking at night, wear bright clothing that makes you stand out from surroundings. Reflective strips or headlamps are even more helpful. You might feel stupid, but stupid is better than injured or dead.

Serious injuries can happen when a car hits a pedestrian. Think about it – an enormous piece of steel is hitting a tiny person, and that person is usually not coming fully clothed from playing goalie at soccer practice. In comparison, the fact that anyone can survive is astonishing.

Severe injuries are frequent, because it's not like the victim is wearing protective armor. The forward momentum from the car is then transferred to the walker, which then causes him or her to be thrown several feet or yards. When the pedestrian strikes the ground, head injuries, broken bones and lacerations can occur.

The worst injuries include:

What happens if a pedestrian and a driver are both to blame for an accident? Like, let's say that someone darted into traffic at a place not designated for pedestrians, and there was no walking light to speak of. The driver had no way to stop in time. What do you do then?

Florida follows the pure comparative negligence standard, which means that even if a person is 99% responsible for an accident, he or she can collect that 1% of damages. A jury would look at the situation and apportion fault between the two parties based on the facts of the case.

If you have been in a Florida pedestrian accident, it would be worth your time to speak to a qualified personal injury attorney. Consider looking through the Florida law firm listings to find someone who can help you.