Commercial vehicle crashes and how they affect you

Table of Contents + show
Commercial vehicle crashes and how they affect you
Truck accident statistics in Florida
The immediate aftermath of a tractor trailer accident in Florida
How to stay safe when driving around tractor trailers
Is dealing with insurance different when trucks are involved?
Comparative negligence/fault system in Florida
What if I need to go to trial in Florida?
Best motor vehicle and personal injury resources in Florida
Did you know that truck accident law varies by state?
Need a lawyer?
What does an injury lawyer do?
You'd think that dealing with a truck accident is just like dealing with a car accident, except on a bigger scale. That's not quite the case. Trucks have multiple insurance policies and an employer to deal with. Meanwhile, truck accidents can be catastrophic, and your tiny car can be lost in the shuffle. Learn why.

When a big rig drives by your car, blocking out the sun and looming like an angry god, you always tense up – just a little bit – until it passes by.

Trucks and tractor trailers are enormous metal monsters that can destroy your dinky car in an instant. On the clogged, overcrowded highways of Florida, the probability of these accidents happening can skyrocket.

In 2016, there were 44,307 commercial vehicle crashes in Florida. Given that there are so many big roads slicing through the state that allow products to flow from one place to another, these trucks play a large role in making commerce happen. However, there is much collateral damage to be considered.

In 2016, there were 44,307 commercial vehicle crashes in Florida
Tweet this

This article will cover how to protect yourself in the event of a truck or tractor trailer accident in Florida, how to handle it most efficiently and how the state's internal mechanisms are different from the rest of the country.

The most affected individuals in truck and tractor trailer accidents are passenger vehicle occupants. Why is that? Well, think about the size difference. Trucks are 20-30 times bigger and also have undercarriage clearance, which means that passenger cars can get trapped underneath.

Trucks also take much longer to stop, given their larger size. They take, on average, 20-40% longer to stop than passenger vehicles, and that can take even longer if road conditions are affected by snow or rain. Additionally, the driver might be exhausted and not paying as much attention – federal regulations allow drivers to work for 11 hours at a time and up to 77 hours over a seven-day period.

In 2015, Florida had the following statistics:

*Truck drivers are subject to very strict governmental regulations concerning alcohol and driving. That is why only 3% of fatally injured large truck drivers had BACs at or above 0.08% in 2015. Compare that to 30% of fatally injured passenger vehicle drivers in 2015 with BACs at or above 0.08% (still a vast improvement from 1982, when it was 51%).

The immediate aftermath of a tractor trailer accident in Florida

An 18-wheeler can weigh up to 80,000 pounds when fully loaded with cargo, while a passenger car can weigh about 4,000 pounds. This means that, thanks to the laws of physics, the passenger car is most likely to be disfavored in a matchup of the two.

Much of the time, they can be multi-car pileups, simply because when a big rig starts sliding on a highway, it's going to take everyone out. This means that your car could hit far more than just the truck itself. It could hit medians, trees, other cars, the undercarriage of the truck, cargo in the truck that falls out or anything else in the immediate area.

The most important thing in any vehicle accident is to assess your injuries. Things are going to be loud, confusing and terrifying right after the accident. You might not understand what's going on. Do a body scan and try to see if anything's bleeding or broken – if you're not sure, remain calm and wait for medical attention. Check on your passengers if you can.

Then, once the most important details have been dealt with, do the following:

How to stay safe when driving around tractor trailers

There are ways to keep yourself in one piece around these massive trucks. One has to keep in mind that trucks are less maneuverable than passenger vehicles, especially when the roads are slick. That, combined with their slow stopping power and 20%-40% farther distance when stopping, can mean that normal cars vastly misjudge when and where those trucks will stop. Either way, 80% of accidents involving big trucks are the fault of commercial drivers.

Keep these things in mind around big trucks:

Is dealing with insurance different when trucks are involved?

Florida is a no-fault state when it comes to car insurance. This means that in the event of a car accident, each car turns to its own insurer to cover any medical bills instead of suing the other driver.

This means that no matter who is hurt – the person driving, the passenger, someone walking on the sidewalk who is sideswiped by an SUV – they all turn to their own car insurance policies first. If someone is uninsured, he or she turns to the policy of the closest insured relative.

Trucking law gets everything complicated. You will be dealing with multiple insurance companies – the driver's, the trucking company's, the cargo's – and they will pressure you into settling quickly so that they don't have to pay the full value of the claim. With your bills piling up, this might seem very tantalizing. Don't do it. Talk to an attorney first. Determining fault is extremely complicated because of all the parties involved (not to mention the fact that truck drivers have many state and federal regulations to follow, as well as local rules where the accident occurred), and you don't want to shortchange yourself.

PIP's blanket coverage is intended to protect drivers in case of small accidents. If your medical costs outweigh your car insurance coverage limits, you can:

No-fault systems are intended to help the courts. Insurance companies can handle smaller claims like a broken nose or arm, and by streamlining these claims instead of clogging up the legal system, the intention is to get claims paid out faster. For catastrophic or permanent injuries, however, drivers can still sue for damages.

In these instances, it helps to have underinsurance or uninsurance policies, which cover you in the event when you're hit by someone who isn't driving with enough insurance.

Florida is notorious for having drivers hit the road without sufficient policies. As of 2012, 23.8% of Florida drivers were uninsured. That is more than one out of every five drivers. Truck drivers wouldn't be allowed to work for companies without adequate insurance, but a $10,000 policy is not going to cover the grievous injuries that a big rig can cause to a passenger car.

Underinsurance policies cover the medical bills that wouldn't be covered by PIP or the other driver's insurance. Let's say you were hit and suffered a horrific injury that allowed you to step outside Florida's no-fault system and sue the other driver. They would have no money for you to claim. An uninsurance policy lets you claim damages against your own insurance company instead so that you won't suffer needlessly.

Additionally, the other interesting aspect of truck driving claims is that truck drivers are generally working for companies. This opens up the concept of respondeat superior, or employer responsibility. If the truck driver was working at the time of the accident, the employer would be responsible for the employee's accident, and more money would be available for your claim.

It's important to note that “fault” and “negligence” are used interchangeably. Just know that negligence is when someone is legally liable for causing harm to another person. The plaintiff (the person who was harmed, so in this case the passenger car) must prove four elements:

This is the basis of every personal injury claim.

In Florida, we follow the “pure comparative negligence” system, which apportions damages between parties based on the percentage of fault. So, a victim can recover damages even if he is 99% at fault for an accident.

What if I need to go to trial in Florida?

The trial process is fairly straightforward. Plaintiffs have four years to file a motor vehicle claim, which is a generous statute of limitations. This gives them a lot of time to heal, gather information related to the accident and find an attorney well versed in truck driving law.

Being in a truck accident can literally change your life. Car accidents are scary. Sometimes those who haven't been through them don't understand how immense of an experience they are. Here are some resources we've collected for you regarding trucking associations, motor vehicle safety, driving education, mental health, physical health and wellness in general.

We hope these resources give you some comfort and peace of mind. In the meantime, if you need to speak with an attorney to start the legal process, try the Enjuris Florida law firm directory. 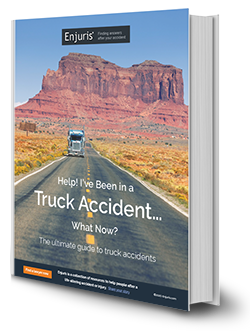