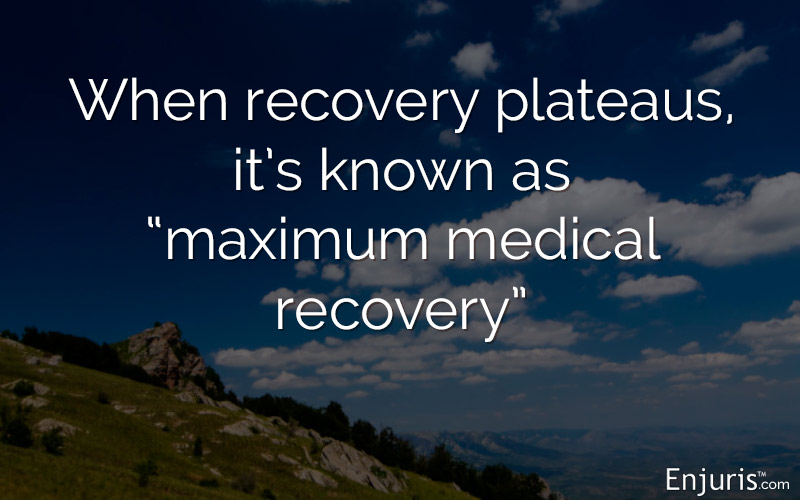 When your physical recovery plateaus

Table of Contents + show
When your physical recovery plateaus
Why is MMI important in an accident claim or settlement?
Future medical costs after MMI

What everyone aims for after an accident is to recover to their fullest ability.

Sometimes, however, people don’t recover entirely. They get maybe 40%, 50% better, and then they plateau.

This isn’t for lack of trying. For instance, let’s say Carl was in a car accident while on the job (this legal concept is very prevalent in workers’ compensation law). He limped away from the smoldering wreckage with a fractured T11-T12 spinal facet joint and herniated discs. After physical therapy, cortisone injections, massage therapy, chiropractor appointments, yoga and even Botox injections to his muscles, Carl still experienced significant pain in his midsection and lower back.

His doctor didn’t give up on him, but further treatment didn’t improve Carl’s physical condition. The accident permanently altered his body so that this was now his new 100%. His doctor claimed that this altered state was Carl’s “maximum medical improvement.” He could only get so much better.

Why is MMI important in an accident claim or settlement?

Maximum medical improvement is important for a few reasons.

Here’s another example to help illustrate why: Jerry was in a construction accident that caused him to tear his rotator cuff. At first he believed he’d be able to heal it without surgery, and his attorney proceeded as such. Jerry was doing very well, working diligently with his physical therapist three times a week. He felt like he was improving. Jerry asked to be medically cleared four months after his injury, but his physical therapist said no. “We should wait at least six months,” she said. “You aren’t improving at the rate I’d like.”

Two months later, his therapist pointed out that Jerry had been working on his rotator cuff for half a year now, and his range of motion was still very limited compared to what it should be. As time passed, they came to an agreement that surgery would be needed to repair his rotator cuff.

If Jerry had been cleared after four months of physical therapy, then he would not have been able to claim the funds necessary to cover his rotator cuff surgery. Until an individual’s medical condition has stabilized enough to have a clear sense of the full magnitude, then it’s impossible to declare that he or she has reached MMI.

Your attorney can calculate the future costs of prescriptions, doctors’ visits, surgeries and more, as well as the pain and suffering you’ve had to and will have to endure. And remember, most conditions worsen over time because of the aging process!

You will receive what is called a “permanent impairment rating” from your doctor, a percentage that represents your reduced body function. This is split into “injured body part” and “whole body,” since your frozen arm is a lot less functional on its own than it is when it’s coupled with your body.

Each injured body part that has reached MMI will receive its own number, which lawyers use to help compare values of injuries.

A good workers’ compensation attorney can help you sort through the weeds. If you need a hand, look through the Enjuris law firm directory!