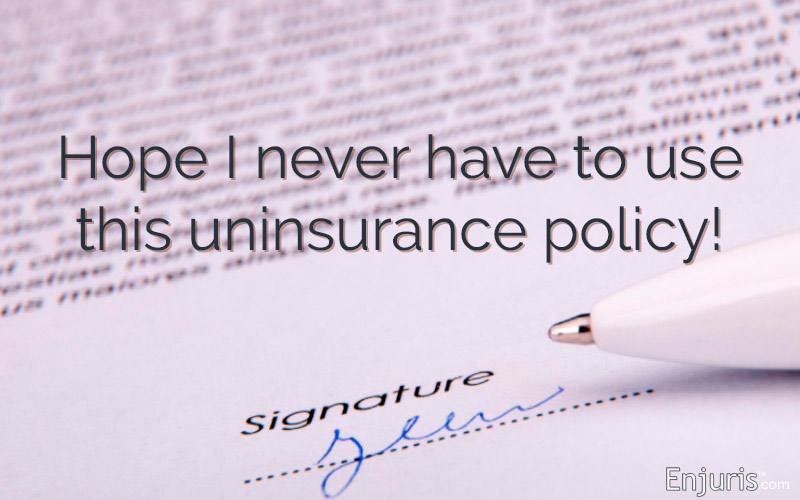 Sometimes when you get into an accident, the other person is only carrying the legal minimum insurance required and that isn’t enough to cover your injuries. What do you do then? The answer: underinsurance or uninsurance.

Florida has some of the lowest insurance requirements in the country. But you know what it doesn't require? Underinsurance and uninsurance motorist coverage.

Traditional automotive insurance is quite important, and Florida requires two different kinds for your car to be on the road.

If a driver is in an accident, no matter who caused it, the drivers would turn to their own insurance policies to cover the damage instead of filing claims in the courts.

This was created to relieve the judiciary of unnecessary personal injury claims that could instead be handled by insurance adjusters. A broken nose or leg could be streamlined by an insurance claim instead of taking years to slog through the courts.

If injuries are considered to be catastrophic, however, then a driver could file a personal injury claim and try to get damages for pain and suffering.

"Catastrophic injuries" are things like scarring, amputations, permanent disabilities and other injuries that will likely last a lifetime and have long-term consequences that would be ill-handled by the insurance industry. This is considered a separate claim outside of the insurance system. Think of it as something entirely different from insurance all together – this is governed by the judicial system and is a traditional court case for negligence against the offending driver.

But what if you get hit by a driver who isn't covered by insurance? What do you do then?

Let's say you are hit by a driver who was risking it, driving without insurance because he didn't want to pay the annual premium. Your medical bills quickly add up to a shocking $86,000 – who's going to pay it? What are you going to do?

After that... it truly depends on what you are willing to pay, if you don't have another policy to cover it. Many individuals forgo medical treatment because they simply cannot pay for it.

Let's pretend that you don't have an underinsurance policy. You would be devastated. If you had $86,000 in medical bills and PIP only covered $10,000 (minus a, say, $1,000 deductible), you would have to pay out of pocket for the remainder.

Since car accidents can have such terrible impacts on those involved, it's important for you to plan for the worst-case scenario. One of the best things you can do is to make sure you're covered by an uninsured motorist policy. These are intended to cover you in the event that you are hit by someone who is driving with the bare minimum required insurance.

Many individuals think the purpose of this coverage is to protect you from those who break the law and drive without insurance. That's true; however, it's also meant to protect you from those who drive only with the bare legal minimum coverage. You need to pay your medical bills if you get hurt. You need to fix your car. You need to take care of your family. How can you do that with $10,000? There are more people driving with the minimum coverage than with no coverage at all.

The most effective way to avoid these sorts of issues is to purchase a policy that exceeds the state minimum. The benefits far outweigh the negatives, and the premium isn't all that much. Life is unpredictable, and cars are highly hazardous. Florida's highways are among the most dangerous in the United States. Wouldn't you rather pay a little extra now instead of a lot later?

If you've been involved in an accident and need help obtaining compensation from the at-fault driver or even your own insurance company, please consider scheduling a consultation with a qualified Florida car accident attorney today.