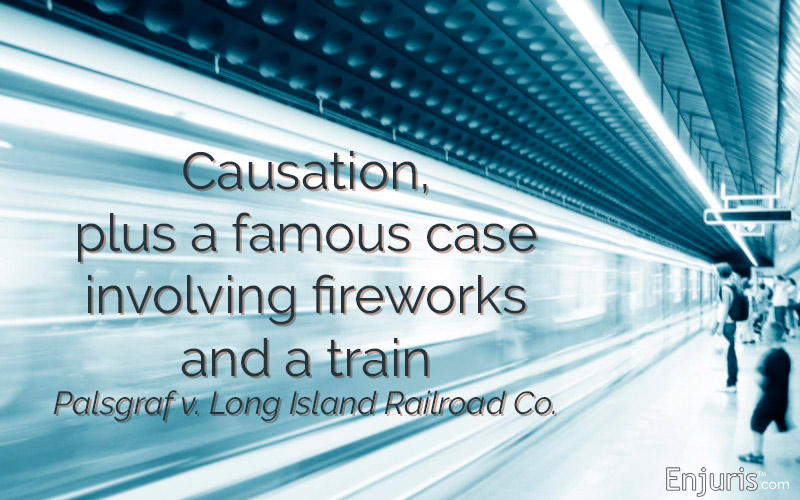 Determining who is legally responsible for what happened

Table of Contents + show
Determining who is legally responsible for what happened
Actual and proximate cause explained
The famous case that illustrates the difference
In negligence cases, there are four parts that must be proven: a duty of care owed to a plaintiff, breach of that duty, causation and damages. Causation can be split into two parts: actual cause (the cause in fact) and proximate cause (what was legally foreseeable). Even if something actually happened, if it was not foreseeable, that person might not be held responsible.

In negligence cases (which are among the most popular types of cases in the legal system), there are four parts that law students try to cram into their brains before an exam: duty, breach, causation and damages. Let’s break those down and specifically talk about the third one.

You’d think so, wouldn’t you? Somehow, that paragraph takes an entire year of law school to understand. Tort law, or the area of law in which someone suffers harm and results in legal liability, can become extremely complicated once you get into the nuts and bolts. That is because of #3, the concept of causation.

Actual and proximate cause explained

Actual cause, also called the “cause in fact” of an injury, states that if it had not happened, the injury wouldn’t have happened, either. But for that cause, the injury would not have occurred. In order to determine actual cause, many courts use the “but for” test. Sometimes they also turn to the “substantial factor” test – did that factor materially contribute to the injury? If it did, then the court has its answer.

Proximate cause is also known as “legal cause.” If the court determines that a particular cause was an actual cause, they then ask whether it was also the proximate cause. In other words, was that injury foreseeable? Even if a defendant’s action was the but-for cause of an injury, the defendant might not be liable for damages if he could not have foreseen that he would cause the injuries that he did.

The famous case that illustrates the difference

The famous case that illustrates the difference between these two is Palsgraf v. Long Island Railroad Co.

A man carrying a package was desperate to board a moving train, and so he leapt aboard with the assistance of two Long Island railroad guards. As one pulled and one pushed, the man dropped his package full of fireworks, which then exploded, causing the crowd to panic.

Foreseeability can throw a wrench into many legal cases.
Tweet this

Someone pushed against a set of scales (yes, it gets stranger), which fell onto Mrs. Palsgraf, the immortal plaintiff who eventually sued the railroad for negligence, stating that the railroad guards who helped the man leap onto the train caused the chain of events that led to her injuries.

The Court of Appeals of New York, in a classic decision by the esteemed Chief Justice Benjamin Cardozo, ruled against Mrs. Palsgraf, saying that while cause in fact existed, proximate cause did not.

There was no way to foresee that the plaintiff would be hit by falling scales if a man tried to board a train all the way at the opposite end of the platform or that exploding fireworks would make a heavy set of scales fall on top of her. While her injuries did exist and were legitimate, no reasonable person could foresee that this would have happened.

Foreseeability can throw a wrench into many legal cases.

Even if you know the actual cause, proximate cause can derail your argument (no pun intended) and send you back to square one. It’s better to have an attorney at your side who can anticipate these issues and remain a step ahead of them. Check out the Enjuris law firm directory if you haven’t hired an attorney yet!