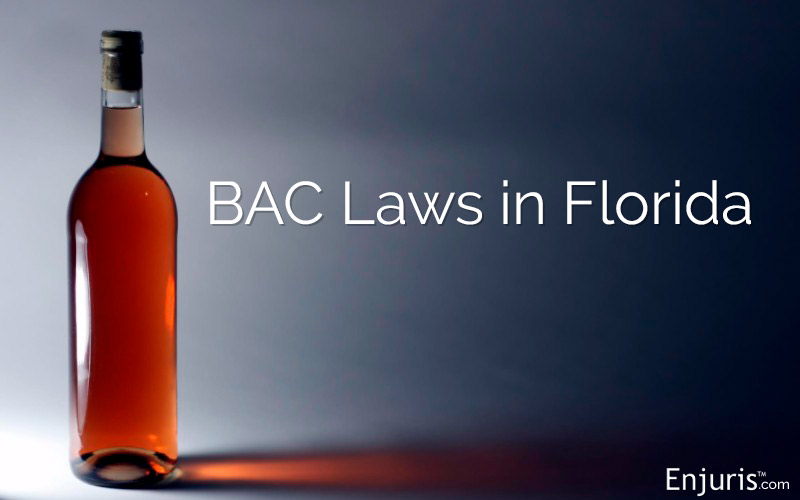 The ABCs about BAC and drunk driving in Florida

Table of Contents + show
The ABCs about BAC and drunk driving in Florida
Blood alcohol content: the basics
Testing blood alcohol content in Florida
Florida BAC laws
What if I got hit by a drunk driver?
Resources to help you hire the best Florida DUI lawyer
Many people don't know exactly how many drinks it takes to get to 0.08%, the magic number for legal intoxication where it is no longer legal for a person older than 21 to drive. That is because an individual's blood alcohol content can be affected by various factors: age, gender, weight, food consumption and more. Learn more and reach out to a Florida lawyer right here.

"Just one more drink," your friends say. "It's just a tiny shot. It's so small. It's like a thimble."

Yes, it's like a thimble. A thimble full of 180-proof alcohol.

Most of us don't realize how various types of alcohol affect our BAC, or blood alcohol content. That's why we can go out and drink endless beers at the pub, but it only takes two shots to get us buzzed and ready to go dancing. Not knowing how different alcohols affect you can be very dangerous, so it helps to understand how BAC works and how it relates to drunk driving laws in your state – Florida in this case.

This is what happens at various levels of blood alcohol content:

Alcohol seeps into the bloodstream through your stomach and small intestine in as few as 15 minutes. You'll become drunker as your BAC rises. Variables that can affect your BAC include weight, gender, age, water consumption and food intake.

Blood alcohol content levels can be tested by a variety of different ways: normally, by blood, breath, or urine.

Blood testing has proven to be troublesome in the field because many individuals have a fear of needles, or they have communicable diseases. Police officers then need to bring suspects to phlebotomists at hospitals or clinics and wait for the test results, which can take a number of weeks or months. While it is the more accurate route, it is certainly the most time-consuming test. As such, people go for the path of least resistance.

Breath testing is the simplest, though attorneys argue to juries all the time that it is not accurate. Blood testing is the best, but as mentioned above, it requires trained professionals and is time-consuming; urinalysis is not as accurate as the blood testing and breath tests, and is only used as a last resort.

Breathalyzers, meanwhile, are portable and quick with results. That's why they are used the most often.

Zero tolerance and per se laws

What about those adults who have more than 0.08 g/dL in their bloodstreams (or those youths with more than 0.02 g/dL)?

All states have laws that deem any driver "per se intoxicated" with a BAC of 0.08 g/dL or higher. This means that the cops don't need to find any additional evidence. Even if that person has developed a tolerance and is functioning well at 0.08%, he will still be convicted of driving while intoxicated.

In order to be convicted of a "per se" DUI offense in Florida, the court must show that your blood alcohol limit was more than the legal limit when you were driving. (As a refresher, "per se" means that the prosecution doesn't need to prove your intent or state of mind; the evidence of your BAC is enough to establish that a crime occurred.)

Florida law, as stated by the court in Miller v. State, states that chemical test results will be admissible in court to illustrate BAC levels if police test a DUI suspect within a "reasonable time" after that suspect was pulled over. This is a fact-dependent determination and will be different with every case.

Here are some facts about Florida's alcohol laws:

If you've ever watched Law & Order, though, you know that people "plea these charges down" all the time. That means they argue for a lesser charge in exchange for something else – or the district attorney is just feeling nice that day. In Florida, you can plea down to what is referred to as a "wet reckless," or a reckless driving charge. However, you will have to complete a substance abuse evaluation and education course. If referred to a substance abuse program, you will also be required by law to finish that program.

What if I got hit by a drunk driver?

Let's say you're on the other side: What happens if you've been hit by someone driving under the influence?

Florida is a no-fault state, which means that individuals are expected to turn to their own insurance policies when they are in car accidents.

Claimants otherwise have four years to file a negligence claim in the court system, which gives them ample time to build a case. Florida is a pure comparative negligence state along with 13 other states – meaning a victim is allowed to recover damages, even if he or she is 99% responsible for the accident. That person can still collect 1% of damages.

The legal system is split into two sides: criminal and civil. The district attorney in Florida would pursue criminal charges against the drunk driver, while you could potentially pursue your own case in the civil court for damages. This is where you'd receive compensation in the form of economic damages, which are out-of-pocket expenses like medical bills, child care, transportation costs and lost income. Then there are non-economic damages, which include non-tangible items like pain and suffering, loss of consortium and mental anguish.

You might also pursue a dram shop case if the driver was served alcohol at a tavern or bar prior to driving. If the bartender could see the driver was "habitually addicted" and served him despite that fact, or served someone under the age of 21, the tavern could be held responsible.

The driver's insurance company will likely try to settle with you for far less money than what your case is worth, but be persistent. A good attorney can help you significantly.

Resources to help you hire the best Florida DUI lawyer