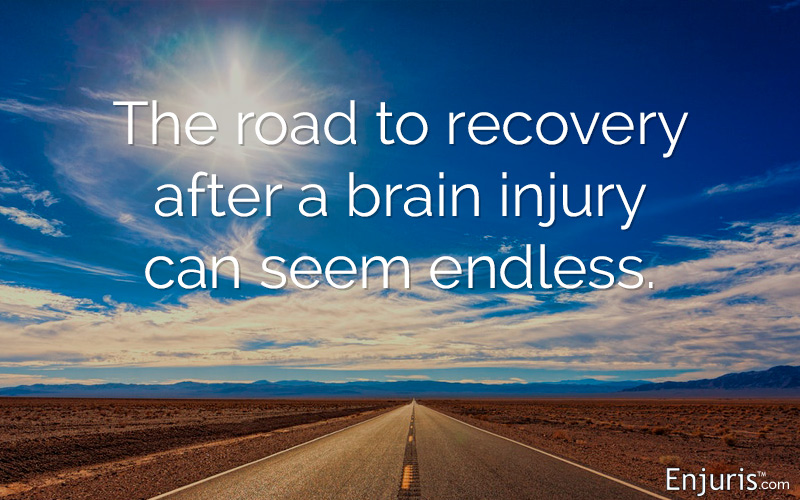 Recover the compensation you need to manage your traumatic brain injury

The most serious head injuries result in traumatic brain injury (TBI). TBI is caused by an impact to the head that disrupts the normal functioning of the brain. The severity of TBI ranges from mild (i.e. a brief change in mental status or consciousness, such as a concussion) to severe.

In this article, we’ll take a look at common head and brain injuries (with a focus on TBI), who’s liable for these injuries, and what damages might be available.

Unfortunately, head and brain injuries are more common than you might think.

Here are some startling facts gathered from the American Association of Neurological Surgeons, the Brain Injury Association of America, and the Centers for Disease Control and Prevention:

The causes of TBI vary tremendously. You might think that car accidents are the leading cause of TBI, but in fact most people with TBI sustained the injury as a result of a fall.

Symptoms of a head or brain injury

Similar to neck and back injuries, the symptoms of a head injury aren’t always obvious. What’s more, some symptoms may not appear until months after the injury is sustained. Some common symptoms include:

If you or a loved one exhibit any of these symptoms, be sure to see a healthcare provider immediately and be sure to tell the provider about any recent accidents or injuries to your head.

Can I be compensated for my brain or head injury?

If you’ve suffered a head or brain injury in Arizona, you may be able to recover damages. Your legal recourse depends on the cause of the injury.

If your head or brain injury is caused by another person or entity’s carelessness, you can recover damages by filing an insurance claim or a negligence lawsuit.

Enjuris tip: Learn how to pick the right Arizona personal injury attorney for your case.

In Arizona, you must prove 3 elements to establish negligence:

Accidents that result in negligence claims based on a head or brain injury include, but are not limited to:

If you suffered a head or brain injury as a result of a workplace accident, you may be able to file a workers’ compensation claim.

Most injuries are covered so long as the injury occurred during the course of employment. Even if you already had the head or brain injury and the work-related accident merely aggravated the injury, you’re still eligible to receive workers’ compensation benefits.

In rare cases, someone may have intentionally caused your head or brain injury. For example, you may have been intentionally struck in the head. This is called an “intentional tort,” and—in addition to the criminal action that may be brought for assault—you can seek further damages in a civil lawsuit.

In a personal injury case, you’re entitled to compensation from the person or entity legally responsible for your injuries. The legal term for this compensation is “damages.”

In Arizona, there are three basic types of damages available in a personal injury lawsuit:

Let’s take a closer look at each of these.

Economic damages are intended to compensate you for the monetary losses associated with your head or brain injury. These losses might include:

Non-economic damages are designed to compensate you for the non-monetary consequences of your injury. For example, the subjective pain and suffering that you experience as a result of your injury. General damages vary from case to case, but common examples include:

Many insurance adjusters and attorneys in Arizona use a formula to arrive at a rough estimate of how much a person’s claim is worth. Here’s the formula:

Special damages x 1-5 (depending on the severity of the injury) + lost income = damages.

For example, let’s say a car accident results in TBI and you incur $150,000 in medical bills. Let’s also say that, because of your injury, you miss 6 months of work for which you would have been paid $30,000. Your formula might look like this:

Keep in mind that this is only a starting point. The amount can go up or down depending on a number of factors, including:

When dealing with a head or brain injury, your recovery will depend in large part on the medical evidence that supports your claim. For this reason, it’s important to seek medical attention immediately following your accident.

Enjuris tip: Use our Post-Accident Journal to record to help document the impact of your injury on your daily life. Also, use our Damages/Expenses Worksheet to keep track of the medical costs associated with your injury.

What if I’m partially at fault?

Suffering a head or brain injury is a traumatic experience. Additional support is available in Arizona. We encourage you to contact these organizations to help you on your road to recovery.

We also encourage you to consider talking with an attorney who can help you with the legal implications of your accident while you just focus on getting better. Use our free online directory to find an Arizona brain injury lawyer near you.