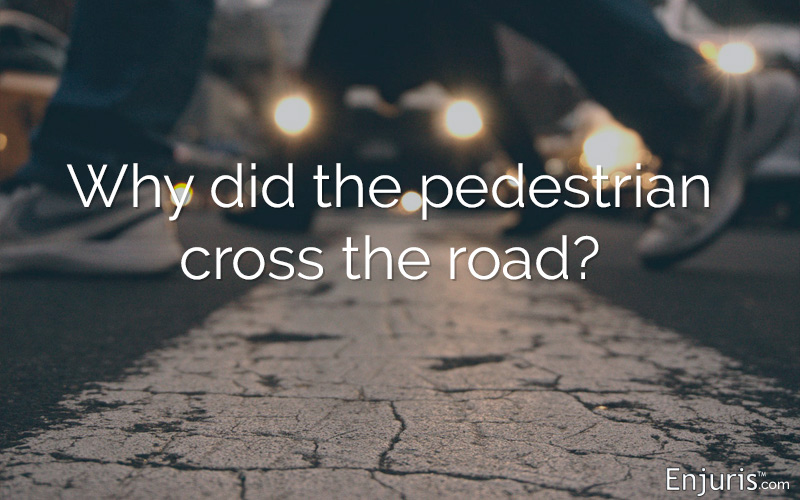 In Arizona, where the skies are blue and the natural scenery is awe inspiring, pedestrians are plentiful. Unfortunately, Arizona has the highest rate of pedestrian deaths in the nation and is widely recognized as one of the most dangerous states to travel on foot.

In Arizona, the term “pedestrian” doesn’t just refer to people walking on foot. It also refers to runners and people in manual or motorized wheelchairs.

The vast majority of pedestrian accidents occurred in urban areas (with most occurring in Maricopa County and the Phoenix metropolitan area).

Causes of pedestrian accidents in Arizona

As you can see from the chart below, most pedestrian fatalities and injuries occurred when pedestrians were crossing the road:

Additionally, the majority of pedestrians (65.4%) were NOT under the influence of drugs or alcohol at the time of the accident:

Finally, weather conditions and time of day don’t appear to play much of a factor in pedestrian accidents in Arizona, as the vast majority of injuries occurred during the day when light conditions were clear.

Arizona law requires drivers to exercise due care to avoid colliding with a pedestrian. In addition, all drivers in Arizona are required to:

Arizona also imposes a number of laws on pedestrians:

As mentioned above, all drivers have a legal duty to drive with reasonable care and to obey all traffic laws. If a driver breaches that duty and the breach causes an accident, the driver can be sued for negligence.

Pedestrians also have a duty to exercise reasonable care while navigating Arizona’s roads. Just like a driver, if a pedestrian breaches their duty of care (for example, by running out into the middle of the road), the pedestrian can be sued for negligence.

In some cases, the driver and the pedestrian might both be at fault for an accident. What happens then?

Arizona follows the pure comparative fault theory. Under this theory, the amount of damages a plaintiff can recover is reduced by a percentage that reflects the plaintiff’s degree of fault – no matter what that percentage may be.

John is driving his truck along the road and texting his wife. At the same time, Susan starts to cross the road, despite an absence of a crosswalk. Because John is texting, he doesn’t see Susan and he hits her with his truck. Susan sues John and the court determines that John was 80% at fault for the accident, while Susan was 20% at fault.

In the above scenario, Susan would only be able to recover 80% of her damages due to Arizona’s pure comparative fault laws.

Enjuris tip: The statute of limitations in Arizona for most personal injury claims is 2 years. If you’re suing a public employee, you must file a claim with the appropriate public entity within 180 days.

What damages are available in a pedestrian accident?

When a pedestrian is struck by a motor vehicle, they have no airbags, seatbelts, or steel cages to lessen the impact. As a result, pedestrian accidents can be extremely serious and often fatal. Some common injuries include:

In addition, a pedestrian might be able to recover punitive damages if the driver’s actions were intentional or particularly outrageous.

Drivers can also recover economic damages, non-economic damages, and punitive damages if they crashed trying to avoid a pedestrian, which resulted in serious injury or damage. In most cases, given the nature of pedestrian-motor vehicle collisions, the driver will recover property damage.

To avoid pedestrian accidents, both drivers and pedestrians should follow all traffic laws and practice caution when navigating high-risk areas (such as school zones, neighborhoods and busy urban areas). In addition, although Arizona law doesn’t require it, pedestrians should consider wearing bright colors and reflective gear at night.

Enjuris tip: Take a look at the Arizona Department of Transportation guide: Sharing the Road with Pedestrians to learn more tips for avoiding pedestrian accidents.

In the hopes of reducing the amount of pedestrian accidents in Arizona, the Governor’s Office of Highway Safety recently accepted a $793,250 grant from the National Highway Traffic Safety Administration for pedestrian and bicyclist law enforcement and education efforts.

If you’re involved in a pedestrian accident (either as the pedestrian or the driver), it’s a good idea to contact an attorney to ensure you recover all of the damages available to you. Use our free online directory to find an Arizona attorney where you live.