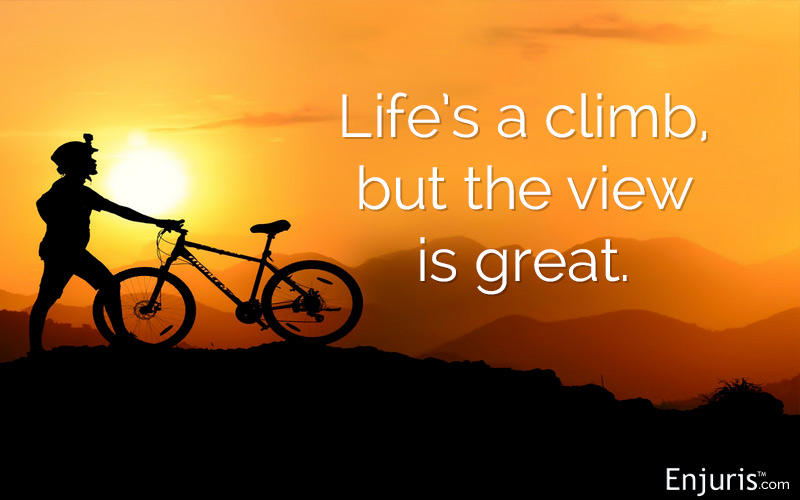 Bicycle accidents are common in Arizona. Learn about the causes of bike accidents, the laws that impact bicyclists, and how fault is determined in a bike accident.

An estimated 47.5 million people ride bikes in the United States (and rising). Arizona’s clear skies, warm weather and captivating natural landmarks make it a particularly ideal place for cyclists. Unfortunately, the combination of bicycles and motorized vehicles on the road can be deadly.

According to the National Highway Traffic Safety Administration, more than 2 people are killed on a bicycle every day across the United States.

In Arizona, 32 cyclists were killed and 1,371 were injured in 2017—making Arizona the 5th most dangerous state for bicyclists.

Arizona is the 5th most dangerous state in the country for bicyclists. Tweet this

The chart below shows the total number of bicycle accidents per county in 2017, as well as the number of accidents that resulted in a fatality or a non-fatal injury to a bicyclist.

As you can see from the chart, Maricopa County far outnumbered all other counties in Arizona combined for total number of bicycle accident injuries and fatalities. This is because cycling accidents are much more common in urban and metropolitan environments like Phoenix and Tucson than in rural areas like Clifton.

Like all other states in the country, Arizona requires bicyclists to follow the same rules and regulations as motor vehicles. This means that bicyclists are required to stop for traffic lights and stop signs.

Bicycle-specific laws are outlined in Title 28 of the Arizona Revised Statutes. Some laws to keep in mind when riding your bicycle in Arizona include:

Additionally, in Tucson, Sierra Vista, Yuma County, and Pima County, it’s mandatory to wear a helmet if you’re under the age of 18.

Accidents where the bicyclist is at fault

Of course, not all accidents are caused by drivers. A bicyclist can be found negligent for causing an accident as well.

Moreover, Arizona is a pure comparative fault state. This means that the amount of damages a bicyclist can recover will be reduced by the percentage that reflects the bicyclist’s degree of fault — no matter what that percentage may be.

Say you’re riding your bike at night without a light or reflector. At the same time, a man is driving his truck behind you and texting his wife. You slow down to make a turn and the driver rear ends you. At trial, the jury finds that you were 20% at fault for the accident for failing to have proper lights on your bike, and the driver was 80% at fault for texting behind the wheel. Under Arizona’s comparative fault rule, you would only be allowed to recover 80% of total damages.

Enjuris tip: The statute of limitations in Arizona for most personal injury claims, including bicycle accidents, is 2 years. If you’re suing a public employee, you must file a claim with the appropriate public entity within 180 days.

Here are some examples of actions that might cause a bicyclist to be found at fault or partially at fault for an accident:

Safety tips on how to prevent bike accidents

The statistics across the country show that bicyclists aren’t going anywhere. As a result, motor vehicle drivers and bicyclists must work together to prevent accidents.

Here are some tips for bicyclists:

Enjuris tip: For more information on staying safe while riding your bike, take a look at the Bicycling Street Smarts manual released by the Arizona Department of Transportation.

And here are some tips for drivers of motor vehicles:

What to do after a bicycle crash

Whether you’re driving a motor vehicle or a bike, there are a few things you should do following a bicycle accident:

A bike accident can be a physically and emotionally traumatic event. The last thing you probably want to do after an accident is spend your time dealing with a lengthy insurance or legal claim. Use our free online directory to locate an attorney in your area to work on your claim so that you can focus on the process of healing and recovery.