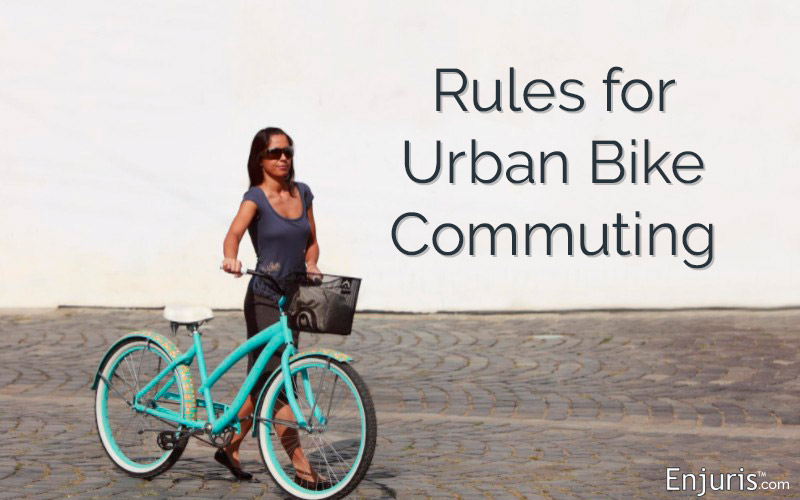 Today we welcome Amanda Wilks, a veteran mountain biker and cycling advocate. She tells us about bicycle traffic laws and how to stay safe while commuting to work on your bike. We know you’re wanting a refresher on hand signals and whether you ride your bike with or against traffic, right? Thanks, Amanda!

The call of the open road is persuasive, and few methods of travel compare to whizzing down the street on a bike, enjoying the air and the ambiance of the world around you without being trapped inside a car.

Bike commuting lets you work towards improving yourself during a stretch of time you'd otherwise lose to sitting still and staring out a windshield, but it takes a few considerations to keep yourself properly protected while on the road. After all, cycling isn't always entirely safe.

Riding a bike in any area with vehicle traffic means you have to pay careful attention to the road, fellow cyclists, the vehicles around you as well as the rules and regulations of your local area. It's equally important to keep in mind that not all regulations are hard and fast laws, but you might be thankful you followed them if they help you avoid an injury or a nasty collision. Here are half a dozen regulations to think about the next time you hop on your bike.

Table of Contents + show
1. Ride Like You're Driving
2. Signal Properly
3. Be Seen at Night
4. Wear A Helmet
5. Keep Your Focus
6. Beware the Bike Lane
Conclusion
Learn about bicycle laws in your state

It's not an outright rule, but rather a riding method to adhere to: any time you ride in the street means you're bound by the same laws that any other driver is beholden to and it's not just to keep traffic flowing smoothly. Riding predictably means you'll be less likely to be hit which means you might want to avoid swerving through lanes of traffic erratically, taking wild turns or riding too close to cars if at all possible.

The golden rule in this case is to simply act as you would want other drivers and cyclists to act. Be seen, ride carefully and don't act in a way that might surprise your fellow commuters.

If you're on a highway you're expected to signal your turns, plain and simple. Familiarize yourself with hand signals for different maneuvers such as turns, but keep in mind it's just as important to signal a slowdown or a stop, too. Nothing will cut your workday short like being plowed into by a driver who didn't know you were about to stop.

Nothing will cut your workday short like being plowed into by a driver who didn't know you were about to stop. Tweet this

If you have extra money lying about, there are also electronic signals you can mount to your bike to add an extra bit of light and movement to boost your visibility. If you go this route, ensure you check your batteries regularly.

Different states have different requirements, but it's still a good idea to ensure drivers can see you at night.

Riders in Washington, for example, are required to have a front light and a red rear reflector for any night riding conditions, and it's not a bad idea to have reflectors on your wheel spokes as well.

If you're especially concerned about visibility while bike commuting at night, don't ride after dusk without wearing bright or reflective clothing.

Not every state requires a helmet. This is less a matter of a hard and fast rule and simply a matter of common sense: helmets save lives.

You're less likely to sustain a serious head injury when your head is properly protected, so even if your state is lax on laws, don't take that as a free pass to ride around helmet-free. You'll live a much longer, happier life if you don't have to spend the rest of it nursing an easily preventable head wound.

Additionally, make sure the helmet you use has been properly tested for impact safety and isn't too old. Older helmets may not reach current standards of safety or may even have compromised protection due to their age.

There's nothing inherently wrong with wanting to spice up your daily ride with some music or even an audio book, but taking away one of your senses is an easy way to fall prey to more easily prevented accidents.

Don't blast music and certainly don't text while riding. Nothing makes you a less sympathetic target than being involved in an accident where your distraction was partially at fault.

The bike lane is likely there for your convenience, should it exist at all, but chances are your fellow commuters won't treat you as proper traffic if you stick to the bike lane. Be wary of parked cars just waiting to throw open a door to nail you with and be on the lookout for debris in the lane. If you have to make a sudden swerve, perform a small left turn and correct back to the right, with your weight shifted further right than usual; If you begin to fall, you'll land in the bike lane or off the road rather than in the face of oncoming traffic.

As always, bike commuting has its shares of ups and downs that depend heavily on your skill as a cyclist. Keep alert, signal what you intend to do, ride predictably and make sure your head is adequately protected.

If anything should happen to you, make sure it was as unlikely as possible and you'll enjoy more years of pedaling your way to work rather than being stuck in slow-moving traffic.

Amanda Wilks is a writer, contributing author at https://mountainbikereviewed.com/ and veteran MTBer. As a cycling advocate, she believes that bike commuters should take all the necessary precautions and safety measures before going for a ride in the city. If you’re interested in reading more of Amanda’s work, go on Twitter.

Learn about bicycle laws in your state