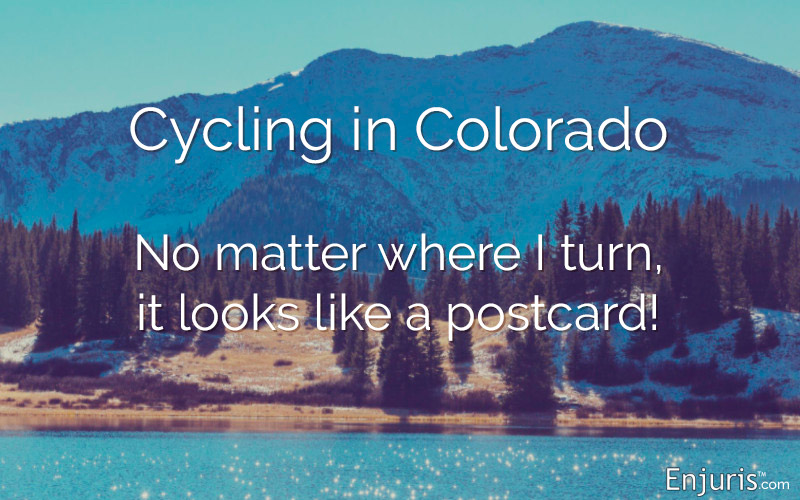 How to succeed with a bicycle accident claim in Colorado

Many people love bicycling in Colorado, with the feel of the brisk air during their ride. Denver has a large number of cyclists who depend on cycling as an alternative mode of transportation. Several communities in Colorado have established reputations as being bike-friendly.

However, despite these advantages, bicycle accidents can cause serious repercussions.

The first step that many injured victims take in the process is to file an insurance claim with the party responsible for the accident.

This may include a motorist’s auto insurance policy in the event that the motorist collided with the cyclist. In some instances, a person’s own auto insurance coverage may provide protection even if the injured person was cycling at the time.

After a claim is opened, the case is assigned to an insurance adjuster. This person represents the insurance company’s financial interests, so he or she may attempt to resolve the claim for as little as possible.

Since 2003, Colorado has been a fault state in handling accident claims. Prior to this, the state used a no-fault system in which each person’s insurance policy would provide for medical expenses and lost wages regardless of who caused the accident. However, now the insurance companies assess who was at fault for the accident and impose the liability for payment on this person and his or her insurance company.

Colorado has a number of laws pertaining to safe cycling. Some of these include:

Individuals who violate these laws or motorists who violate traffic laws may be found negligent for the accident and may be required to pay damages for the harm that they caused. Cops are usually lax in enforcing these laws, though some have gotten stricter in ticketing cyclists who run stop signs and red lights, for example.

Enjuris tip: Invest in a sturdy helmet, a mirror and lights for your bike. If you take whatever defensive measures you can, you'll have a stronger case.

Injured individuals may be able to request compensation for damages that they suffer including medical expenses, pain and suffering, and lost wages. Colorado has certain damage caps in personal injury cases, which serve to limit the amount of compensation an injured victim can receive.

For non-economic damages such as pain and suffering and mental anguish, there is a cap of $250,000 or $500,000 if there is clear and convincing evidence that justifies the use of the higher amount. These values are subject to raises based on inflation, which means the actual amount of damages is hard to pin down most of the time.

There is not a limit for economic damages, such as medical treatment and lost wages or earning capacity. This is important to note because cyclist injuries are often severe and costly. Catastrophic injuries like traumatic brain injuries or paralysis are common injuries in these types of accidents, which can lead to permanent consequences for the victims.

Furthermore, Colorado has a strict two-year statute of limitations for personal injury claims. The timeline is even shorter for cases involving a claim against a city, county or the state, which is only 180 days to file a formal claim.

In CO, personal injury claims can be filed within 3 years. But if it's against the state you have 180 days. Tweet this

Another important law to be aware of in Colorado if you are an accident victim is the state’s use of modified comparative fault. With this process, the amount of compensation that a person may be entitled to based on the damages that he or she suffered is reduced by the percentage of fault that the victim contributed to the accident.

If the victim suffered $10,000 in damages and was responsible for 10 percent of the accident, this award would be reduced by $1,000 to $9,000. This approach holds unless the person is 50 or more percent at fault for the accident, in which case the claim is barred and the victim would receive nothing in damages.

What to do after an accident

It is critical for the success of a case that a cyclist knows what to do if he or she is ever involved in an accident.

Doing the right things and avoiding the wrong ones can have a direct impact on the potential success of a claim or lawsuit as well as on the amount that is recovered. Building a strong personal injury case begins immediately after the accident occurs. Some things to do after a cycling accident include:

It is important that you immediately notify the police after a cycling accident because this helps to document the incident.

The police will also gather pertinent information, such as the name of the other party involved and any insurance information. Additionally, police may conduct an investigation into the causes of the accident or factors that may have contributed to the accident, such as distracted driving or alcohol consumption. This information can help support your claim.

If you are able, it is also important to collect evidence.

Shortly after an accident, all evidence will be removed, so it is important that you act fast. Take pictures of the accident scene from a variety of angles. Photograph any road signs or signals that may have something to do with the accident.

If anyone saw the accident, write down their information. Take pictures of the road quality and weather conditions. Even take pictures of your tires and bike.

After a traumatic accident, it is important to seek medical attention. Some victims make the mistake of believing that they have not been injured only to find out they have an internal injury weeks later. It is best to seek immediate medical attention to prevent any further damage. This will also strengthen your case if you decide later to file a claim or bring a lawsuit.

Keep all documents that may be relevant to a claim or personal injury case. This includes the police report that is filed after the accident, any medical records, payment for medical bills, check stubs that show decreased earnings because of time off work and any recorded statements.

Contact a personal injury lawyer for assistance with your case. If you're not sure where to look, check out the Enjuris Colorado law firm directory for help!