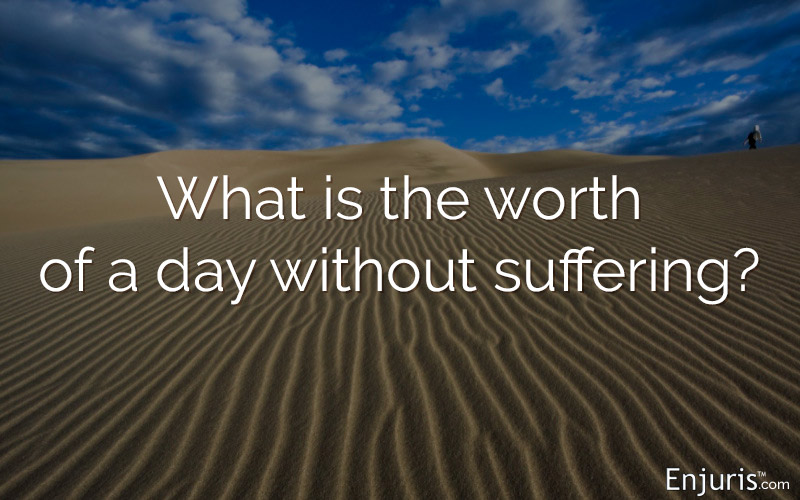 An accident or injury in Colorado can cause medical and economic fallout for you and your family for years to come. Yet defining the actual cost of damages can be a major challenge.

On one hand, calculating the actual cost of your injuries in terms of medical bills and lost wages can be fairly straightforward. However, the question of what your pain and suffering might be worth can be much more difficult to calculate.

If pressed for an exact answer, what would you say is the worth of a day without suffering?

Types of damages in Colorado

The state of Colorado uses a slightly different set of terms to describe damages in personal injury cases than many states. What are considered “actual” or “special” damages in other states are called economic damages in Colorado.

Economic damages are the clearly quantifiable costs of dealing with your injuries, covering everything from hospitalization to vehicle mileage required for therapist visits.

The state allows claimants to seek unlimited economic damages in most cases. For example, plaintiffs can seek millions of dollars if that is what the medical consequences of an injury cost.

Colorado allows claimants to seek unlimited economic damages in most cases.
Tweet this

Caps on claims for pain and suffering

The state’s laws carve out a series of different caps that are dictated by both the date and type of  incident.

The caps for pain and suffering in Colorado are set as follows. These figures show the amounts in the statutes adjusted for inflation:

There are clear exceptions to these limits on pain and suffering:

Total recoveries in dram shop cases are capped at $150,000 total per injured person, including pain and suffering. These are cases that typically involve people who were hurt or killed in drunk driving incidents who sought damages against a bar or tavern for allowing the at-fault party to drive while visibly intoxicated.

Wrongful death claims follow the same set of caps, except the $250,000 cap increases to $300,000 in cases of death by medical negligence. In Colorado wrongful death cases, there is no cap of damages in instances of felonious (criminal) killings. Damages awarded in solatium, to compensate for grief or emotional concerns absent financial harm, are capped at $50,000.

Adjustments are made periodically to cover inflation that may have occurred since the passage of the original state statutes.

Claimants can seek damages from multiple parties, and the caps apply on a per party basis. For example, if as part of a slip and fall case you sue a store and its cleaning company, the award is capped at $250,000, but you can pursue that amount against each party for a total of $500,000.

Colorado, like many states, employs a comparative fault standard for determining if someone receives compensation and how much they can be awarded. For example, if two drivers collide due to poor choices, there may be divided responsibility.

Enjuris tip: If a claimant is found to be more than 50% responsible for an accident or injury, Colorado does not permit that person to receive any damages.

The at-fault driver might only be 80% responsible for the accident, while the injured party may be 20% responsible. The difference is ultimately subtracted from the total award of damages.

In this example, if $500,000 were awarded as total damages, then $100,000 would be subtracted from the final award to the claimant because they were partly at fault.

If a claimant is found to be more than 50% responsible for the accident, Colorado does not permit that person to receive any damages for pain and suffering or otherwise.

How multipliers can be used in Colorado pain and suffering calculations

The application of a multiplier is fairly common practice across most states to determine pain and suffering. While Colorado law does not specifically encourage the use of a multiplier, many attorneys and insurance companies use it to calculate damages.

A multiple between one and five is applied, depending upon the severity of the injuries. Brief physical discomfort might be seen as a one, while the inability to focus for more than a few minutes might be a four.

Enjuris tip: Use the Enjuris post-accident journal to record your pain and medical journey.

What is covered under pain and suffering?

Colorado permits recovery of compensation for a number of forms of suffering. For example, a person who experiences anxiety at the thought of going outside following an auto accident may be able to seek money to cover that reduction in quality of life.

Emotional distress is also often included in damages. The loss of companionship and consortium, including losing the ability to enjoy life with a spouse, may also be the basis of a claim.

Colorado’s complex system of caps can make seeking an injury claim in the state especially difficult. You may want to consult with an attorney and present the specifics of your case.

If there’s a potential cause of action, your lawyer can then contact the insurance company for the responsible party and initiate the process.