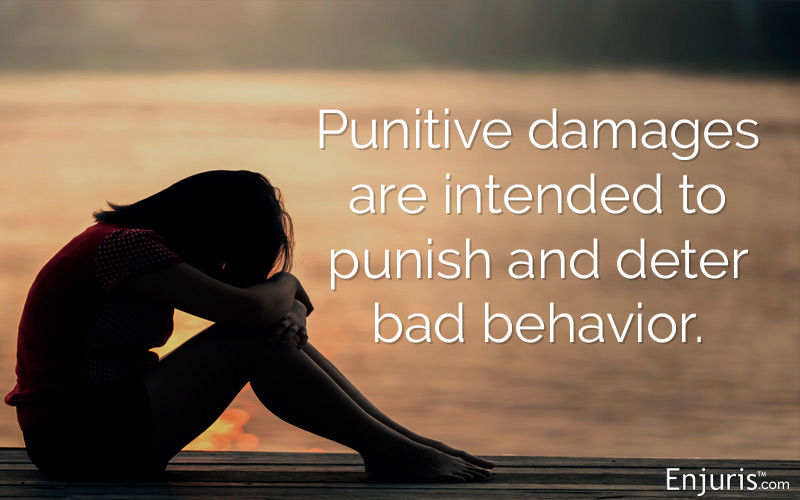 The purpose of a civil lawsuit is to return the injured plaintiff to the position they were in before their injury. However, in rare cases, the defendant’s conduct is so bad that the court punishes the defendant. This is where punitive damages come into play.

What are punitive damages?

When it comes to personal injury law, there are two types of damages: compensatory damages and punitive damages (sometimes called “exemplary damages”).

Punitive damages are monetary damages awarded to a plaintiff in addition to and apart from compensatory damages.

There are two primary purposes for awarding punitive damages:

When are punitive damages available in Arizona?

In Arizona, punitive damages are only available when the plaintiff can prove that the defendant acted with an “evil hand and evil mind.”

What does this mean? Arizona courts have held that a defendant acts with an evil hand and an evil mind when the defendant either:

From the above definition, you can see that punitive damages aren’t available when the defendant is simply negligent (i.e., careless).

So what are some situations where punitive damages might be available in a personal injury lawsuit? Here are a few examples:

What is the standard of proof?

The standard of proof to recover punitive damages is “clear and convincing” evidence of the defendant’s “evil hand and mind.” This means the plaintiff must present strong evidence that is highly and substantially more probable to be true than not true.

In Arizona, insurance policies cover punitive damages unless those damages are explicitly excluded. Tweet this

Are there any limitations?

For example, if you’re awarded $100,000 in compensatory damages, an award of $900,000 will generally be deemed unconstitutional and reduced to something more appropriate.

The Arizona Supreme Court is even stricter, holding that a ratio of 4:1 will generally be deemed unconstitutional. Regardless, there’s no specifically-required compensatory-to-punitive-damages ratio. All cases are different and Arizona courts will consider 4 main factors when determining the appropriateness of a punitive damages award:

Is there a case example?

Nevertheless, during the flight, the pilot learned that the men on board were carrying handguns and notified the Phoenix Police. The police handcuffed the men as they disembarked from the plane and put them in jail for 2 days. It was later determined that cooperation from Southwest would have resulted in the immediate release of the bounty hunters, but that Southwest refused to cooperate.

An Arizona court of appeals court found that the 8:1 ratio was unconstitutional and reduced the award to a 1:1 ration (i.e., $500,000 in punitive damages).

If you think punitive damages might be available in your case, use our free online directory to find an experienced Arizona attorney so that you can ensure you get the damages award you deserve.