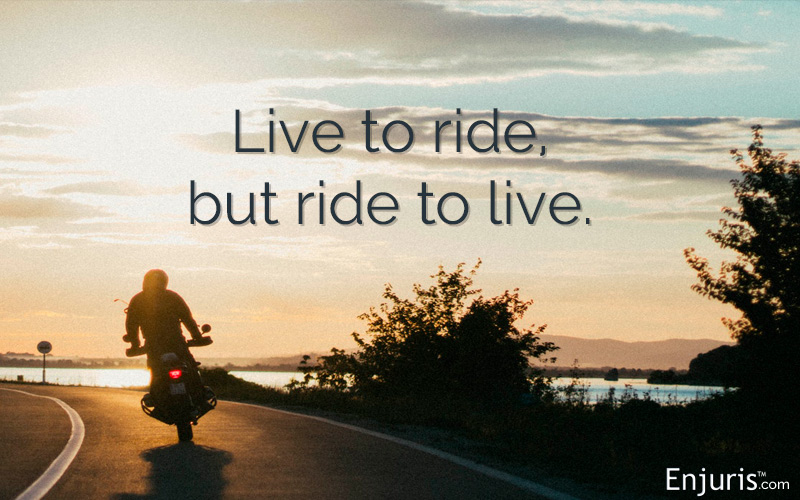 Even if a rider was partly at fault, they might still recover damages in a personal injury lawsuit

Boasting 3 of the top 5 sunniest cities in the country (Yuma, Phoenix, and Tucson), Arizona is the perfect state to trade in your car for a motorcycle.

Unfortunately, motorcycle riders lack the protection of an enclosed vehicle and as a result motorcycle accidents are typically more serious than car accidents. The National Highway Traffic Safety Administration reports that motorcyclist deaths occur 28 times more often than deaths in other vehicles.

In 2017, there were 207,610 registered motorcycles in Arizona—an increase of more than 27,000 from 2013. Clearly, riding motorcycles is becoming more popular in the state.

The following is a breakdown of motorcycle crashes by geographic location in 2017:

Clearly, most motorcycle crashes happen in urban settings such as a city or town.

Causes of motorcycle accidents in Arizona

Some common causes of motorcycle accidents that aren’t the fault of the motorcyclist include:

Nevertheless, there are times when a motorcyclist causes the accident. The chart below shows the various operation violations that led to motorcycle accidents in 2017:

Motorcyclists, like any other driver, must follow all the Arizona traffic laws. In addition, Arizona has some motorcycle-specific laws that can be found in Title 28 of the Arizona Revised Statutes.

When it comes to laws of the road, motorcyclists and motor vehicle drivers should keep the following in mind:

In addition, there are a number of laws all Arizona motorcyclists must consider before they put the key in the ignition:

Just like motor vehicle drivers, a motorcyclist in Arizona is required to maintain liability insurance. The required minimum amounts of liability coverage in Arizona are:

It’s against the law in Arizona to operate a motorcycle without liability insurance.
Tweet this

Failing to maintain the required liability insurance can lead to finds and the suspension of your motorcycle registration and/or driver’s license. Reinstating these privileges can be expensive and time consuming.

After an accident, the insurance companies and personal injury lawyers will attempt to determine who was at fault for the accident.

Examples of actions that might result in a motorcyclist or motor vehicle driver being found negligent include:

Sometimes, both the motorcyclist and the motor vehicle driver are careless. So what happens then?

Arizona follows the pure comparative fault theory. Under this theory, the amount of damages a plaintiff can recover is reduced by a percentage that reflects the plaintiff’s degree of fault – no matter what that percentage may be.

Samantha is riding her motorcycle with a broken brake light. Jill is following Samantha too closely in her car. Samantha slams on her breaks to avoid a pothole and Jill rear-ends her. Samantha sues Jill and the trial court determines that Jill was 70% at fault for the accident, while Samantha was 30% at fault. In this scenario, Samantha would only be able to recover 70% of her damages due to Arizona’s pure comparative fault laws.

Enjuris tip: The statute of limitations in Arizona for most personal injury claims is 2 years. If you’re suing a public employee, you must file a claim with the appropriate public entity within 180 days.

What damages are available in a motorcycle accident?

All too often, an injured person chooses not to pursue a personal injury claim because they’re unaware of the damages that are available. With that in mind, let’s take a look at some of the damages available in a motorcycle accident.

Here is a breakdown of the two categories:

In addition, Arizona awards punitive damages in rare cases. Punitive damages are meant to punish the defendant and are awarded when a defendant’s behavior was willful or particularly outrageous.

While some states enforce damage caps, Arizona doesn’t cap personal injury damages in most cases. As a result, a plaintiff can recover their damages no matter how large.

Enjuris tip: An Arizona attorney with experience in motorcycle accidents can help you calculate how much you could receive in your case. But, if you want to get a rough idea, take a look at our article on calculating damages in a personal injury case.

Both motorcyclists and motor vehicle drivers can agree that accidents involving motorcycles are particularly dangerous, and best avoided.

Other tips for staying safe and avoiding motorcycle accidents include:

Enjuris tip: For more tips on motorcycle safety, read the Motorcycle Operator Manual published by the Arizona Governor’s Office of Highway Safety.
Downloads:
Free personal injury guides for download to print or save. View all downloads.
Tell your story:
Tell your story - What would you want others to know? Tell us what happened in your accident, and how life has changed for you.
Find an attorney:
Search our directory for personal injury law firms.
See our guide Choosing a personal injury attorney.