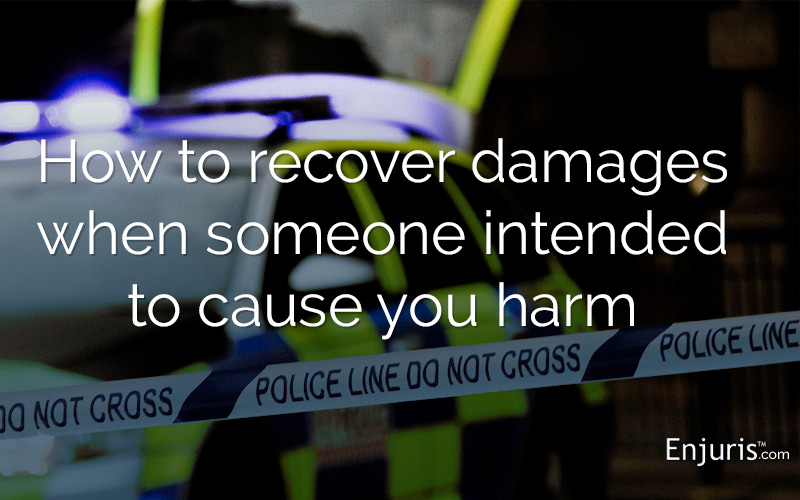 After you or a loved one is the victim of a crime, your stress level is high. A rush of emotions probably flood your mind each day, and you may feel as though you deserve some degree of restitution. Criminal charges are likely to be inflicted, but what about compensating you for your losses? Medical bills, time off from work, property damage, pain and suffering, etc.

Many people don’t realize that a personal injury lawsuit helps victims recover financially from whatever harm a criminal act caused. This personal injury claim is called an “intentional tort,” and the right personal injury attorney can win you the damages you deserve.

What is an intentional tort?

“Intentional tort” is a phrase typically reserved for legal professionals. Most people without any legal training have never heard the term, though it’s a very a simple definition. An intentional tort is any deliberate act causing harm to a person or property.

When a person commits an intentional tort, their insurance won’t cover the damages that the victim demands. For example, if a person deliberately pushes their guest down the stairs, homeowner’s insurance won’t cover the guest’s medical bills. The guilty party (or “tortfeasor” as legal jargon dictates) will have to pay for the injuries out of pocket if ordered to do so via a personal injury lawsuit.

What are examples of intentional torts?

Though the above are easily identified as crimes, some states also have a “catch-all” provision. This means that as long as a deliberate act caused harm to you or your property, you can sue to recover the money you lost due to the incident. If you’re not sure as to whether or not you’re eligible for a personal injury claim from an intentional tort, we encourage you to consult with an attorney.

Enjuris tip: Though you may feel you have a legitimate claim, an attorney may decline your case. Before you schedule another consultation, review our article discussing why you may not have a claim.

Does the person have to be found guilty of a crime for me to recover damages?

Many people worry that if the defendant was declared not guilty in a criminal trial, that a civil lawsuit isn’t possible. That isn’t true, and though a guilty verdict helps your case, you can still recover damages without one.

The key distinction with intentional tort cases lies with the burden of proof. In a criminal case, the defendant must be guilty “beyond a reasonable doubt.” This standard is particularly high, and is one of the key reasons why many cases have hung juries. Civil cases, however, only require a “preponderance of evidence.” This is a lesser standard, though the right evidence and attorney are needed to ensure a plaintiff’s ability to receive compensation.

This difference in the burden of proof is precisely how O.J. Simpson received two different verdicts. There wasn’t enough evidence to convict him in criminal court, but the civil trial awarded the victims’ families damages for the same alleged incident.

Enjuris tip: Though you may be struggling to return to everyday life following an intentional tort, you still need to consult an attorney as soon as possible to prevent the statute of limitations from running out.

How are intentional torts different from negligence cases?

With intentional torts, there are different types of liability. As a result, each case may be presented a little differently and the liable parties may vary. The most common forms of liability include:

Liability against the tortfeasor

This liability appears in the majority of intentional tort lawsuits. Here, the injured party sues the person who committed the harmful act. As explained above, your attorney will try to demonstrate that the defendant intended to cause you harm. If intent is lacking, then it’s likely that your case will either be dismissed or the defendant will be deemed negligent.

These cases are very similar to general tortfeasor liability claims. The distinction, however, is that the defendant didn’t mean to cause harm to you but was still committing a harmful act. In other words, the act was meant for another victim. For example, if the defendant tried to shoot someone else but the bullet hit you instead, their intent “transfers” to you. Thus, you could sue the defendant for an intentional tort and recover the damages connected to your injury, despite the fact that you weren’t the intended target.

Vicarious liability is most common in employment law cases, as this form of liability allows you to sue the employer of whomever caused you harm. With intentional tort cases, however, the employer may only be sued if the tortfeasor’s action occurred within the scope of employment. If, for example, a nurse sexually assaulted a patient while at a hospital, the hospital could be held liable for the nurse’s actions. If the nurse committed sexual assault at her home with a non-patient, then the hospital can’t be sued.

Another form of vicarious liability pertains to parents. In some states, a parent could be held liable if their child commits an intentional tort. The laws vary by state in terms of the specific crime and the age of the child, and you would need to consult a personal injury attorney to see if you could recover damages from the parents.

It’s not important that you try to properly label your potential lawsuit, however. If you were injured by someone else’s deliberate actions, consult with a personal injury attorney. The right attorney will be able to explain your rights and help you pursue the most damages possible.