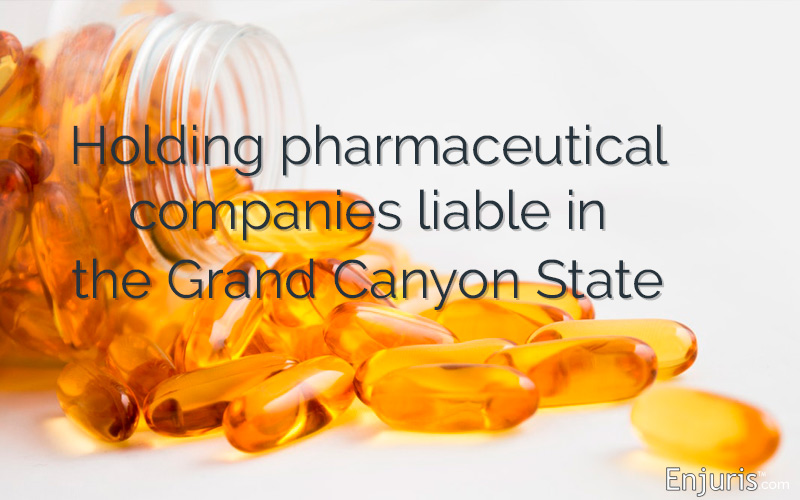 Approximately 4.5 billion prescriptions are filled in the United States every year. Pharmaceutical drugs are intended to make us feel better. But sometimes, a drug makes its way into the marketplace that’s defective, has unreasonably dangerous side effects, or lacks proper warnings.

When bad drugs make their way into people’s medicine cabinets, they can become seriously injured, ill and even die. Legal recourse for individuals injured by pharmaceuticals takes the form of a product liability lawsuit.

Let’s take a closer look at pharmaceutical liability in Arizona.

There are three categories of pharmaceutical liability cases:

Let’s take a closer look at all 3 of these.

A defectively manufactured pharmaceutical drug is one that—though properly designed—left the drug maker in a condition other than they intended. In other words, some error (such as contamination) occurred during the manufacturing process that caused the drug to become unsafe.

Claims based on defectively designed pharmaceuticals are rare because most unreasonably dangerous drugs aren’t approved by the U.S. Food & Drug Administration (FDA). Nevertheless, innovative drugs can be approved in fewer than 6 months, and some side effects may not be realized until after the drugs are on the market.

Arizona courts are particularly strict when it comes to defectively designed pharmaceutical claims. Historically, Arizona has only allowed such claims in cases where the drug is so dangerous that NO doctor would prescribe it to ANY class of patients.

A drug’s “marketing” includes the advertisements associated with a drug, as well as the warning label affixed to the drug packaging. To establish that a drug was improperly marketed in Arizona, a plaintiff must prove that the manufacturer had a duty to warn the consumer about a risk and that the failure to do so made the product unreasonably dangerous.

However, there’s an important caveat in Arizona.

In certain cases, the manufacturer's duty to warn consumers is limited to providing an adequate warning to the prescribing physician who then assumes the duty to pass the necessary information on to the consumer. This is referred to as the learned intermediary doctrine.

There are numerous injuries that a person can sustain from a defective drug. These injuries range from minor to very serious and include:

Who can be held liable for unsafe drugs?

Pharmaceutical liability cases are complex and each case has a number of potential defendants. Generally, an attorney will file a lawsuit against all defendants that may have acted improperly and let the defendants argue amongst themselves over who’s ultimately liable to the plaintiff.

What elements do you need to prove in a pharmaceutical liability case?

In a pharmaceutical liability case based on negligence, the plaintiff must prove that:

In a pharmaceutical liability case based on strict liability, the plaintiff doesn’t need to prove that the defendant breached any sort of a duty. Rather, the plaintiff only needs to show that:

Arizona statute of limitations for suing a pharmaceutical company

In most cases, a person must file a pharmaceutical liability case within 2 years of the date from when they were injured. However, if the person was under the age of 18 when the injury occurred, the clock won’t start running until the person turns 18.

Enjuris tip: When a government or public employee causes an injury, the process of filing a lawsuit is different. For starters, there’s a much shorter time frame to file a lawsuit and a notice of claim must be provided to the appropriate agency (within 180 days). For these reasons, pharmaceutical liability claims involving the government or a public employee should be brought to the attention of an attorney immediately.

What damages are available in a pharmaceutical liability case?

Wondering if a drug you are taking is the subject of a current lawsuit?