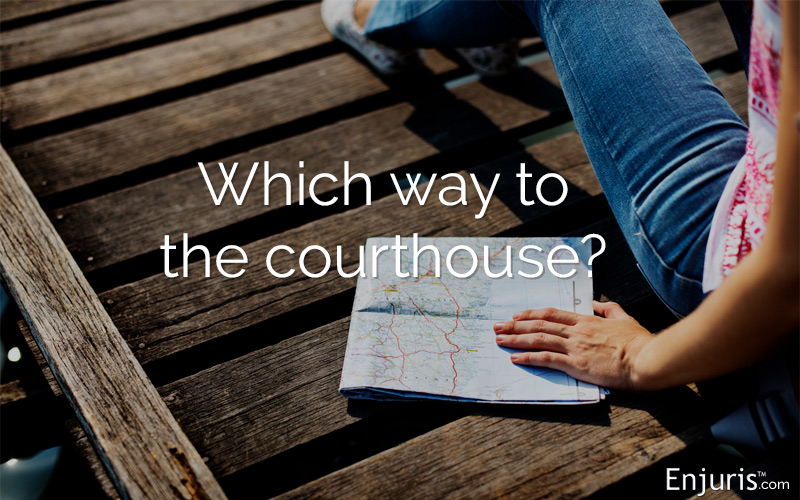 So you’ve made the decision to file a personal injury lawsuit. What now? The legal process can seem daunting, especially if you don’t know where to begin.

In Arizona, you should know there are three court systems where you might file your lawsuit:

The overwhelming majority of personal injury cases are filed in the superior court of the county where the injury occurred or where the defendant lives. However, in some instances, your lawsuit might be filed in one of the other two courts.

Let’s take a closer look at each court system and the circumstances that might lead you to file your lawsuit there.

Justice of the peace courts

Arizona justice of the peace courts have limited jurisdiction. This means that the courts only have the power to hear certain types of cases. These cases include traffic violations, civil protection orders, domestic restraining orders, and tort cases where the amount of claimed damages doesn’t exceed $10,000.

In the small claims division, the rules of the court are “relaxed” so the parties don’t need to hire attorneys. For example, the formal rules of procedure don’t apply. Additionally, you have no right to a jury trial and no right to appeal the decision. Finally, you’re not even allowed to be represented by an attorney in a small claims action unless both parties agree to the use of attorneys.

Each county in Arizona has at least 1 superior court and that court is referred to by its county location (e.g., the Maricopa County Superior Court). Superior courts hear the widest variety of cases, including criminal and civil cases.

Enjuris tip: Each county has a superior court clerk elected to a 4-year term. The clerk maintains court case files and collects fees. While the clerk can’t give you legal advice, the clerk will often provide instructions for physically (or electronically) filing your lawsuit. Locate the contact information for the clerk by accessing the appropriate superior court website.

Keep in mind that just because your case can be filed in federal court doesn’t mean it has to be filed there. You can chose instead to file in state court, though the opposing party might try to “remove” your case to federal court. There are advantages and disadvantages to filing in federal court and an experienced Arizona attorney can walk you through them.

Venue: In which county should you file your Arizona injury claim?

Once you’ve figured out the appropriate court system, you’ll need to decide the proper venue. The term “venue” refers to the geographic location of the court. In other words, you may decide you need to file your case in superior court because the damages claimed are more than $10,000 and there’s no federal question or complete diversity.

But in which county do you file your lawsuit?

Let’s say you’re involved in an accident in Maricopa County with a driver who ran a red light. You live in Pinal County and the defendant lives in Graham County. You’re injured in the accident and are claiming damages in the amount of $20,000.

In the above scenario, you could either file your lawsuit in the Superior Court of Maricopa County (where the accident occurred) or the Superior Court of Graham County (where the defendant lives). You can’t file your lawsuit in a justice of the peace court (your damages are too high) or a federal court (you don’t have complete diversity and no federal laws were violated).

Remember, the deadline for filing a personal injury lawsuit in Arizona is generally 2 years. If you don’t file and serve the defendant within 2 years of the accident, you won’t recover any damages. To make sure you file timely and in the right court, consider contacting an Arizona personal injury attorney.

Enjuris tip: For more information on Arizona courts, including contact information, visit the Azcourts.gov webpage.
Downloads:
Free personal injury guides for download to print or save. View all downloads.
Tell your story:
Tell your story - What would you want others to know? Tell us what happened in your accident, and how life has changed for you.
Find an attorney:
Search our directory for personal injury law firms.
See our guide Choosing a personal injury attorney.