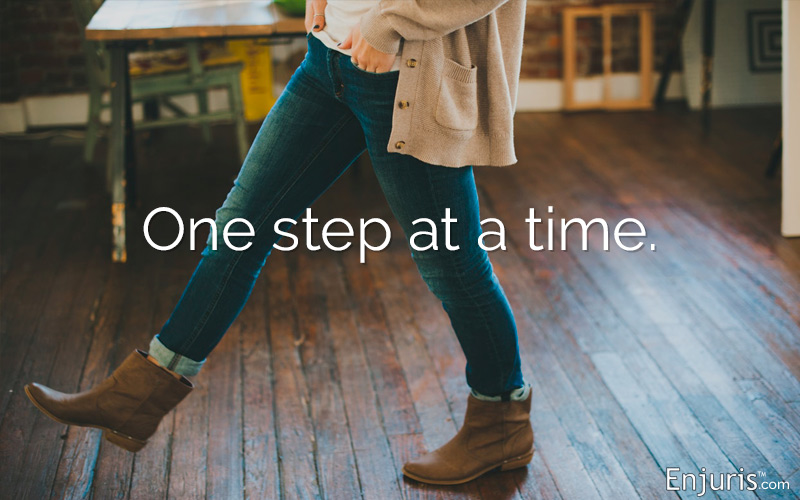 Learn what to expect in your personal injury lawsuit

Table of Contents + show
Learn what to expect in your personal injury lawsuit
Step 1: Consult with an attorney
Step 2: Develop evidence
Step 3: Demand package
Step 4: File a lawsuit
Step 5: Discovery
Step 6: Negotiation
Step 7: Pre-trial motions and hearings
Step 8: Trial
Step 9: Collecting a judgment or appealing
While every lawsuit is different, there are common elements. Learn about the general steps and phases in a personal injury lawsuit, from meeting with an attorney to collecting a judgment.

Let’s take a look at these litigation signposts so that you have a better understanding of how your case might unfold.

Step 1: Consult with an attorney

During the consultation, you’ll discuss the details of your case, including the nature of the accident and the extent of your injuries. The lawyer will ask you a number of questions, but you should also have questions prepared for the lawyer.

At the end of the initial consultation, the attorney should be able to provide you with a case strategy and a list of next steps.

Once you hire an attorney, the attorney will get to work investigating your case and developing the evidence necessary to establish fault. This evidence may include some or all of the following:

Your attorney should communicate with you throughout the investigation. At times, they may need to ask you follow-up questions about your accident and injuries.

Your attorney may also request certain information from you, such as medical bills or pay stubs. It’s important that you cooperate fully with them during this process.

Once your attorney has completed their initial investigation and gathered some of the important evidence, they’ll likely put together a demand package (sometimes called a “settlement offer”) to submit to the opposing party’s lawyer or the opposing party’s insurance company.

The demand package will generally have two components:

The purpose of the demand package is to give the other party an opportunity to settle the case without incurring the additional time and expense associated with filing a lawsuit.

Upon receipt of the demand package, the other side will do one of three things:

If the demand package doesn’t lead to a settlement, your attorney will file a lawsuit. The term “file a lawsuit” is used to describe the two distinct steps necessary to start a lawsuit:

Enjuris tip: For most personal injury lawsuits in Arizona, you must file and serve the defendant with a complaint within 2 years of the injury. Because of this deadline, you shouldn’t delay meeting with an attorney about your case.

“Discovery” is the legal term used to describe the pre-trial procedure in which the plaintiff obtains evidence from the defendant and vice versa. The general rule is that a party can obtain any information from the other side so long as it pertains to an issue in the lawsuit and is not “privileged.” The most common example of something that is privileged is a private correspondence between an attorney and their client.

There are four basic discovery tools that are used in lawsuits to obtain information. They are:

As your attorney develops evidence through discovery, they will continue to attempt to negotiate a settlement.

While a good attorney isn’t afraid to go to trial, they also recognize that trials are expensive, stressful, and time consuming. Because of this, the attorneys in your case will likely make several attempts to settle. In some cases, the attorneys may bring in a mediator. The mediator is an independent person (often a current or former judge) whose job is to help the parties reach an agreement.

A good lawyer isn’t afraid to go to trial, but also understands the benefits of reaching a reasonable settlement. Tweet this

A majority of personal injury cases settle before they reach trial. However, if the case can’t be settled, the next step in the litigation process is a trial. At the end of the trial, a decision maker (either a judge or jury, depending on the case) will determine fault and enter a judgment.

Step 9: Collecting a judgment or appealing

Once the court enters a judgment, your lawyer will go through the process of collecting and distributing the funds to you. If the judgment wasn’t in your favor, you have the option to appeal the ruling by filing a notice of appeal with the court of appeals.

A good lawyer will walk you through all of these steps so that the process isn’t so daunting. To locate an experienced Arizona attorney, use our free online directory.