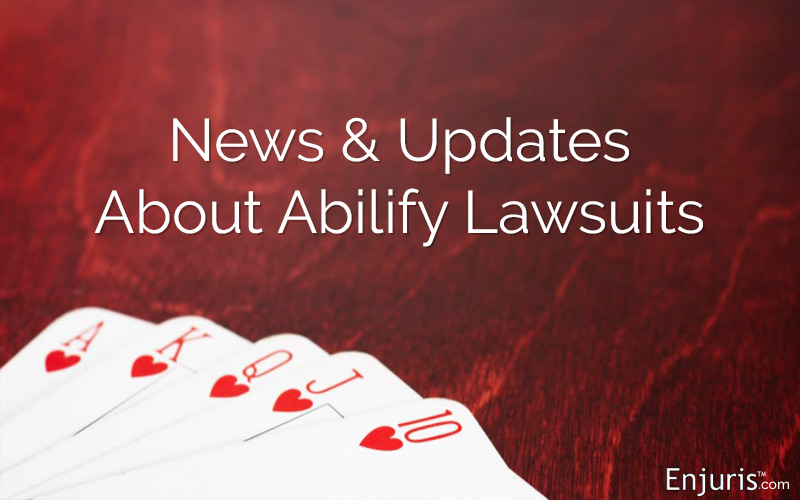 Side effects, settlements, and how to find a lawyer

Table of Contents + show
Side effects, settlements, and how to find a lawyer
What is Abilify used for?
Possible Abilify side effects and complications
Overview of Abilify lawsuits
What to do if you think you may have a Abilify lawsuit
Ready to learn more?
Abilify is a medication that treats psychosis. However, it can also cause serious and unusual side effects ranging from compulsive gambling to hypersexuality. When patients spend thousands of dollars at the casino, they're often left in debt and without financial recourse. Learn more about this controversial drug and the lawsuits patients are pursuing.

Someone who experiences psychosis shouldn’t also have to deal with a lack of impulse control. Unfortunately, that’s exactly what happened with the antipsychotic drug Abilify.

The pharmaceutical medication Abilify (aripiprazole) is sold by manufacturer Otsuka Pharmaceutical and marketed by Bristol-Meyer Squibb to help treat psychosis (a set of behaviors including strange or unwanted thoughts, behaviors, and perceptions).

The Food and Drug Administration (FDA) recently conducted a review of Abilify after patients began filing complaints. In 2016, they made an announcement stating that the medication’s label didn’t accurately reflect the “nature of the impulse-control risk.”

What is Abilify used for?

The antipsychotic drug Abilify treats conditions such as:

The injected version of Abilify is used for those who experience agitation because of schizophrenia or bipolar mania. By altering dopamine and serotonin levels in the brain, patients feel calmer and experience improvements in their mood and behavior.

Possible Abilify side effects and complications

There are many possible side effects associated with Abilify. The following list contains some, but not all, of these conditions:

The most unusual side effects are the ones at the center of patients’ lawsuits: lack of impulse control, hypersexuality, compulsive gambling and overspending.

Abilify was approved by the FDA for the treatment of schizophrenia in 2002, and despite the lawsuit controversy, it’s still prescribed today. Doctors regularly prescribe Abilify to those 13 years of age and older who suffer from debilitating and disordered thoughts and feelings associated with psychosis.

Despite its restrictions for teenagers with schizophrenia, it’s commonly prescribed for children as young as 6 with Tourette’s disorder. The FDA stated that because Abilify may help quell aggressive behavior and mood imbalances with autistic disorders, it can be given to children between the ages of 6 and 17.

Abilify also has several off-label uses, or uses for which the FDA has not granted approval. Doctors commonly prescribe this drug for anxiety, delusional disorders, and insomnia. It’s also undergoing clinical trials to see if its use can be expanded.

It’s important to note that Abilify isn’t meant for patients with dementia, as it can cause pneumonia, heart failure or even death in older adults. This risk earned a black box warning from the FDA (the strongest warning they give, which denotes a higher rate of mortality associated with the product).

A second black box warning states that the medication might increase the risk of suicidal thinking and behavior in children and young adults who are also on antidepressants.

Lawsuits can take multiple forms. Multidistrict litigation (MDL) is a type of legal procedure where cases from different states that share similar facts are consolidated. This allows the courts to streamline the discovery process, since the same evidence will work for each included case.

This kind of case falls under a type of negligence called pharmaceutical liability, a subset of defective products. When a medication is the subject of a lawsuit, one of the following statements will apply:

There is currently an MDL against Abilify pending in the United States District Court for the Northern District of Florida. The Judicial Panel on Multidistrict Litigation (JPML) consolidated all current and future cases into MDL #2374, and attorneys are now accepting cases.

Enjuris tip: Experiencing compulsive symptoms or side effects after taking Abilify for bipolar disorder or schizophrenia? Speak with your doctor before pursuing a lawsuit.

With Bristol-Myers Squibb and Otsuka Pharmaceutical named as defendants, plaintiffs state that the companies:

It’s important to note that the FDA label didn’t mention compulsive behaviors or loss of impulse control for approximately 14 years.

In the transfer order, the JPML stated that each lawsuit outlines the plaintiff’s compulsive gambling habits caused by taking Abilify. As of June 2018, there are almost 1,600 cases in the overarching MDL now entering the discovery phase.

Other injuries and claims included in Abilify lawsuits are:

If a plaintiff has spent more than $10,000 because of these uncontrollable behaviors (and has evidence of such), or can illustrate how much weight he or she has gained because of binge eating, they can pursue financial recovery. This would help to pay for treatment and compensate them for their losses.

The courts may be inclined to award punitive damages in certain cases, or damages meant to punish. This is intended to keep drug companies from repeating their grossly negligent actions.

The judge overseeing the Abilify MDL hopes for a September 2018 global settlement. There were three bellwether cases scheduled to go to trial, but they settled before proceedings began and didn’t disclose the settlement amounts.

There are currently no class actions against Abilify. There are differences between a class action and MDLs. Before any class action starts, the plaintiffs require certification as a single class. The Federal Rules of Civil Procedure states a class can be certified if:

Enjuris tip: Should your pharmaceutical liability lawsuit be brought as a solo case, part of Multidistrict Litigation (what is that?), or in a class action? A products liability lawyer can determine which is best.

Another form of lawsuit is the mass tort, which is similar to a class-action. Both have numerous plaintiffs; defendants are common in each case; and litigation is grouped together for efficiency’s sake. However, mass torts treat plaintiffs as individuals. Conversely, class actions designate class representatives. Mass torts can have small numbers of plaintiffs, which make it a logical choice for when the four requirements for a class action are not met.

The JPML might make decisions on your behalf and add your case to an existing MDL, even if you file an individual lawsuit. Patients can choose to file in state court if the defendant and plaintiff are located in the same state. If the defendant is in another state, the case will be tried in federal court. (This legal theory is called “ diversity jurisdiction.”)

Diversity jurisdiction makes no difference to the plaintiff except for the building where the case is filed. However, federal claims involve litigation regarding:

Abilify lawsuits in the news

There have already been some landmark cases involving Abilify.

If you believe Abilify is causing you to experience health issues or side effects, please see your health care professional. Find out for sure if it’s the medication that is causing your symptoms. Make sure to keep a log of how and what you feel (and, crucially, when you feel it). Get started by downloading our free pain journal.

If your doctor makes the link between your symptoms and Abilify, then it’s time to meet with a lawyer.

Every state has its own statute of limitations. This is the time available to file a case, and the hourglass starts running from the date of the accident or injury. Some states offer only one year in which to file claims for personal injury. Remember, you can always switch lawyers after filing if necessary. Here are questions to ask a personal injury attorney to ensure a good fit.

Try the Enjuris lawyer directory to find someone near you.

If you think your health issues and pain after taking Abilify merit legal action, check out these articles for more information: