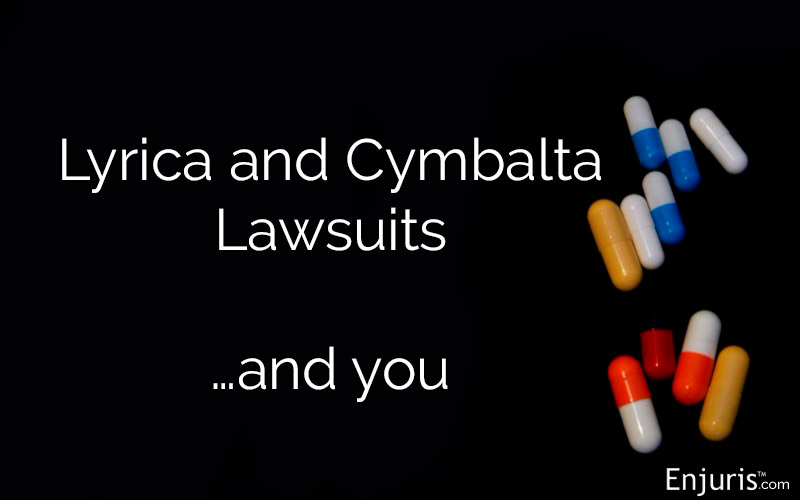 Withdrawal, permanent side effects, brain damage... how to hire a lawyer

Table of Contents + show
Withdrawal, permanent side effects, brain damage... how to hire a lawyer
Drug companies’ misleading marketing materials
Lyrica and Cymbalta can also cause suicidal thoughts and ideations
Lyrica and Cymbalta medications may cause memory loss
The long-term effect – including brain damage - is still unknown
Lyrica and Cymbalta – are they bad drugs?
Hiring a lawyer for a Lyrica and/or Cymbalta lawsuit
Do you or someone you know take Lyrica or Cymbalta medication for nerve pain or depression? You may have already heard about the drug lawsuits around these nerve and antidepressant meds for things like brain damage, permanent side effects and withdrawal. Here’s how it started: In 2016, a small study concluded that these two medications commonly used off-label to treat pain and neuropathy were more effective when used together to treat the condition known as fibromyalgia. The study only had 39 patients, but many health providers took it as a cue that these medications can safely improve patients’ quality of life...

Meanwhile, massive class-action lawsuits against the pharmaceutical giants Eli Lilly and Company and Pfizer, the makers of these drugs, have been chugging on for years. Pfizer in particular was hit with a $43 million settlement in 2012. And lawsuits continue today.

That doesn’t quite seem to jive with “safely improving patients’ quality of life.”

What is it about these medications that is so controversial? Well...

Pfizer and Eli Lilly like to talk big. That $43 million settlement from Pfizer? That was about misleading marketing materials regarding Lyrica and another drug they make called Zyvox.

In terms of Eli Lilly, their lawsuits were slightly different. Cymbalta was approved for the off-label use of chronic pain, but their marketing materials did not mention the near impossibility of getting off the medication. Patients would try the pills, use it for a period of time, and then the dangers of withdrawal surfaced...

According to the National Pain Report,

As early as 2005, research indicated a high rate of what medical professionals call “adverse events” when patients stopped taking Cymbalta. This Lilly study found that 44 percent of patients involved in several short-term trials had “adverse events” when they suddenly stopped taking duloxetine (the generic name for Cymbalta). The most common withdrawal symptoms cited were dizziness, nausea, headache, paresthesia (tingling/numbness, usually in the limbs), vomiting, irritability and nightmares. About 10 percent of these patients had “severe” withdrawal symptoms. A longer and larger Lilly trial involving 1,279 patients found that 50 percent of patients experienced withdrawal symptoms.

Since these effects were not disclosed to patients prior to being prescribed the Cymbalta/duloxetine medication, hundreds upon hundreds of lawsuits were filed.

Lyrica and Cymbalta can also cause suicidal thoughts and ideations

Pharmaceutical sales representatives told doctors that these medications were safe for additional conditions than were listed on the box. They were encouraged to use what was called “Pfizer Math,” according to lawsuits, to persuade doctors and illustrate that their drugs were better than competitors’ on the market.

The increased use of Lyrica for more than the originally intended conditions meant that additional patients were experiencing unintended side effects, some of them being suicidal thoughts and ideations as well as major depressive disorder.

Prescribing off-label can be a dangerous game, especially because patients have so much trust in their doctors. White coats and stethoscopes emanate an image of absolute power. When someone is prescribed a medication that does more harm than good, or worse, ends up provoking suicidal thoughts, tracing it back to an off-label prescription can be exceedingly difficult.

The matter is still up for debate with Cymbalta, though patients are fiercely convinced that the medication causes suicidal thoughts and have brought up anecdotal evidence online, as well as legal cases in which patients committed suicide after taking the drug for only a number of months.

Many of these Cymbalta lawsuits are still in progress, and a large number of law firms accept cases for this medication. Keep reading for more on how to hire the right lawyer for your Lyrica or Cymbalta case...

Lyrica and Cymbalta medications may cause memory loss

When a medication is mentioned by the AARP as something that causes memory loss, you’ll want to pay attention, folks.

With Cymbalta, an antidepressant, approximately 35% of adults had difficulty remembering things and 54% had difficulty concentrating. This happens because antidepressants block serotonin and norepinephrine, which are two of the brain’s most important chemical messengers.

The long-term effect – including brain damage - is still unknown

The worst part of this entire story is that these side effects – the mood swings, the memory loss or brain damage, the difficulty finding words, the tingling, the numbness, the headaches, the nausea – they might never go away, even once you stop taking the drugs.

And because these medications prevent the creation of new brain synapses, as we now know, this leads to both short- and long-term memory loss, which would possibly lead to something like Alzheimer’s disease or dementia.

It seems there is a good chance you may suffer permanent side effects.

As for other long-term effects, doctors simply do not know because the effects have not been studied. The medications have not been around for long enough yet, and patients haven’t taken them for that long.

However, we do know that other side effects include, but are not limited to:

That’s a fun list of medication side effects, if we ever saw one.

Lyrica and Cymbalta – are they bad drugs?

The point of this piece is not that you should never take these medications.

At least one member of Enjuris (the one who wrote this piece, actually) takes both, simply because the pros now outweigh the cons. Cymbalta and Lyrica do exactly what they say on the tin, which is that they take care of situational depression, back pain and excruciating nerve pain. Sometimes you do have to listen to your doctor.

However, you must be your own patient advocate, and do your research and due diligence.

That is not to say that prescribing off-label for unrelated medical conditions isn’t a shady business practice. When someone is put onto a strong drug that will literally change his or her brain chemistry – and that drug wasn’t necessary in the first place – something bad is bound to happen.

Hiring a lawyer for a Lyrica and/or Cymbalta lawsuit

If you’ve been affected by any of these dangers of taking Cymbalta and Lyrica, you may want to consider speaking with a lawyer who handles bad drug lawsuits. He or she will be able to advise you on your possible courses of action and whether you can recover any damages in a lawsuit.

But how do you go about hiring the right lawyer? We have a few articles you’ll want to read:

Know before you go into any lawsuit that it could take a long time.

How Long Will My Injury Claim Take?

Have you or someone you know had to use one of these medications? If so, try speaking with a lawyer in the Enjuris law firm directory – they will be able to help.