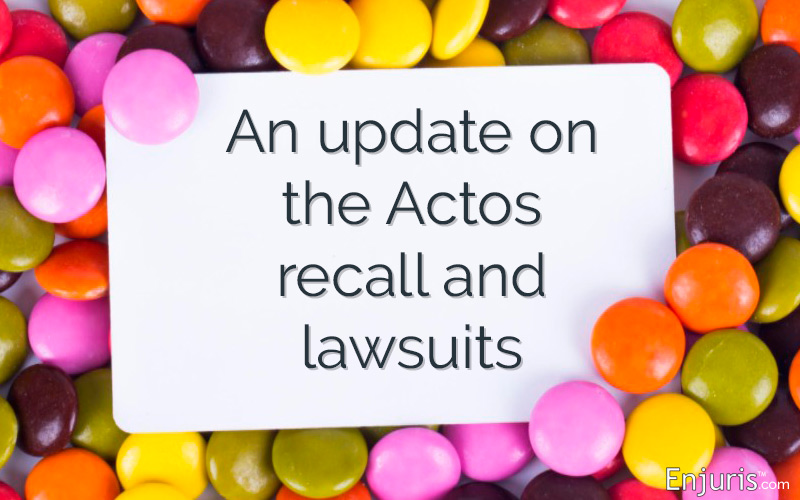 Side effects, lawsuits, settlements and how to find a lawyer

Table of Contents + show
Side effects, lawsuits, settlements and how to find a lawyer
What is Actos used for?
Possible Actos complications and side effects
Overview of Actos lawsuits
Types of Actos lawsuits
What to do if you think you may have a Actos lawsuit
Ready to learn more about an Actos lawsuit?
Actos is a medication intended to treat Type 2 diabetes. By decreasing insulin resistance and reducing glucose made in the liver, it lowers blood sugar. However, the drug has been shown to cause serious side effects ranging from bladder cancer to congestive heart failure. With Type 2 diabetes becoming increasingly prevalent in the United States, how many more Actos lawsuits will arise?

Diabetes is a disease that causes high blood sugar. Type 1 diabetes is a congenital condition with an unknown origin, but Type 2 diabetes is caused by a combination of genetics and lifestyle choices. It has become a more prevalent health condition in recent years. Although rates in the United States have finally begun to fall, rates for adults worldwide continues to rise.

The pharmaceutical drug Actos (pioglitazone hydrochloride) is sold by manufacturer Takeda Pharmaceuticals to help treat Type 2 diabetes by decreasing insulin resistance and reducing glucose made in the liver. This, in turn, lowers blood sugar.

The Food and Drug Administration (FDA) recently conducted a review of Actos after patients began filing complaints. In 2015, Takeda Pharmaceuticals chose to settle with approximately 9,000 patients for $2.37 billion. Despite both of these enormous negatives (and the fact that Actos was pulled from the German, Indian and French markets), it is still being prescribed in the U.S. and the generic version is available in many other countries.

What is Actos used for?

Actos treats adult-onset Type 2 diabetes, a condition that can develop in anyone, at any time, of any body type, at any age. In fact, up to 95% of diabetes cases among adults are for Type 2. It is more prevalent among middle-aged and older individuals. While most people think that the obese automatically develop Type 2 diabetes, the reality is that thin people also suffer.

Symptoms of Type 2 diabetes include the following:

Possible Actos complications and side effects

Here is a list of short- and long-term side effects and complications associated with Actos:

FDA and government actions regarding Actos

The FDA approved Actos for the mass market in 1999, which was followed by Actoplus Met in 2005 and Actoplus Met XR in 2009. Manufacturer Eli Lilly worked with Takeda to market Actos, which became one of the most wildly successful medications for diabetes, earning $4.3 billion in global revenue in 2010.

The following year, however, the FDA told Takeda that their warning label for Actos had to be revised to include language regarding the increased risk of bladder cancer if the drug is used for longer than a year.

Actos has serious side effects, like bladder cancer and liver failure. Are you at risk?
Tweet this

Takeda had already linked Actos to bladder issues before 2011, and more studies concluded that patients who took Actos were more likely to develop bladder cancer than those who took other medication.

Alarmed, the FDA required Takeda to conduct a 10-year study of the link between Actos use and a higher incidence of bladder cancer. In 2016, the FDA published an updated notice, which stated the following:

As a result of an updated review, the U.S. Food and Drug Administration (FDA) has concluded that use of the type 2 diabetes medicine pioglitazone (Actos, Actoplus Met, Actoplus Met XR, Duetact, Oseni) may be linked to an increased risk of bladder cancer. The labels of pioglitazone-containing medicines already contain warnings about this risk, and we have now approved label updates to describe the additional studies we reviewed. We alerted the public about the possible risk of bladder cancer in September 2010 and June 2011 based on interim results from a 10-year epidemiologic study. We changed the labels of pioglitazone-containing medicines in August 2011 to include warnings about this risk, and required the manufacturer to modify and continue the 10-year study.

There are several ways to approach Actos litigation. Multidistrict litigation (MDL) is a federal pleading that consolidates cases from multiple states that share a similar basis of fact. By grouping cases together, courts keep the discovery process from becoming repetitive, and the legal process goes faster for everyone.

A flawed medication falls under a type of negligence called pharmaceutical liability, which is a type of defective product. When a medication is under judicial review, it should fall under one of these categories:

There are no current MDLs for Actos. There was a case a number of years ago that was instructed to stop accepting individual lawsuits in 2017; there were more than 5,000 federal cases consolidated in the U.S. District Court for the Western District of Louisiana. Nine of these cases went to trial, resulting in verdicts against Takeda for a total of more than $22 million.

In 2014, a Louisiana jury awarded Terrence Allen $9 billion in punitive damages and $1.5 million in compensatory damages after he successfully demonstrated that Actos led to his bladder cancer. This was the first case in the federal MDL that was tried. The award was eventually reduced to about $37 million, with fault assigned to Takeda Pharmaceuticals (75%) and their marketing partner Eli Lilly (25%). After this bellwether case, the defendants settled for an enormous $2.37 billion, which resolved the majority of the remaining Actos lawsuits.

Enjuris tip: Experiencing pain and disturbing symptoms or side effects after taking Actos for Type 2 diabetes? Speak with your doctor before pursuing a lawsuit.

Nearly all of the Actos litigation centered around one claim: that the manufacturer knew about the increased risk of bladder cancer, but they failed to warn the public and sold the drug anyway.

There are currently no class actions against Actos. There are some key differences between MDLs and a class action. Before any class action can begin, the plaintiffs need certification as a single class. The Federal Rules of Civil Procedure provide that class certification requires four thresholds be met:

Enjuris tip: Should your pharmaceutical liability lawsuit be brought alone, or as part of a mass tort or class action? A products liability lawyer can help you determine which route is best.

Another form of litigation is the mass tort, which is like a class-action lawsuit. Both types of cases have large numbers of plaintiffs; defendants are the same in each case; and the litigation is grouped together for the sake of efficiency. However, mass torts treat plaintiffs as individuals, while class actions have a designated representative for the entire class. Mass torts can have small numbers of plaintiffs, so this is a popular choice when the criteria for a class action is not met.

There are currently no Actos mass torts, given the $2.37 billion settlement.

The Judicial Panel on Multidistrict Litigation might decide to group your lawsuit with an MDL already in progress; it often makes more sense than one person pursuing an individual case. Patients can always file in state court if the defendant and plaintiff are located in the same state. If the defendant is in another state, the case will be in federal court. (This legal concept is called “diversity jurisdiction.”)

This theory makes no real difference except for where the case is filed. However, federal claims normally involve litigation regarding:

There have been some important lawsuits by individuals regarding Actos, but they weren’t brought by disgruntled patients.

For instance, in 2012 a former Takeda Pharmaceuticals employee blew the whistle and sued her employer, accusing them of hiding damning details about Actos’ side effects from the FDA. The employee claimed that Takeda knew about Actos’ connection to at least a dozen variations of cancer, but they did not disclose this vital information. Jurors found that Takeda intentionally destroyed documents, but they only ordered them to pay a stunningly low $155,000 over this spoliation of evidence. (For the record, “spoliation of evidence” is the destruction or significant alteration of evidence required by the discovery process.)

If you believe Actos is causing you or a loved one to experience health issues or side effects, please see your health care professional as soon as possible. Find out for sure if it’s the medication that is causing your symptoms. Make sure to keep a log of how and what you feel (and, crucially, when you feel it). Get started by downloading our pain journal.

If your doctor makes the link between your symptoms and Actos, then it’s time to meet with a lawyer.

Every state has its own statute of limitations. This is the time available to file a case, and the clock starts ticking from the date of the accident or injury. Some states offer only one year in which to file claims for personal injury. Remember, you can always switch lawyers after filing if necessary.

Here are questions to ask a personal injury attorney to ensure a good fit.

Search the Enjuris lawyer directory to find someone near you.

Ready to learn more about an Actos lawsuit?

If you think your health problems and pain after taking Actos should be resolved in court, check out these helpful articles: