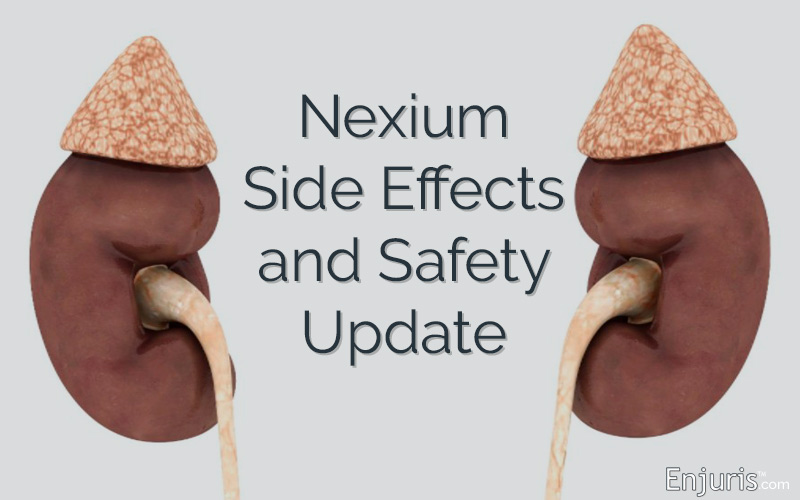 Litigation, settlements, and how to find a defective drug lawyer

Table of Contents + show
Litigation, settlements, and how to find a defective drug lawyer
Background on Nexium
Possible Nexium complications and side effects
Overview of Nexium lawsuits
Types of Nexium lawsuits
What to do if you think you may have a Nexium lawsuit
Ready to learn more about a Nexium lawsuit?
Nexium is a medication called a “proton pump inhibitor,” or PPI. These drugs are used to treat heartburn and other gastrointestinal symptoms, and they're among the most commonly prescribed in the United States. However, they cause serious side effects ranging from constipation to kidney failure. With PPIs being available over-the-counter, how much more prevalent will these health issues become?

Heartburn medication is among the most popular drugs in the United States. It’s heavily advertised both on television and online, and some of them are even household names. Nexium is arguably one of the most well known.

Nexium (esomeprazole) treats conditions in the gastrointestinal tract like heartburn and gastroesophageal reflux disease (GERD). AstraZeneca, the manufacturer, sold Nexium to the tune of $72.45 billion between 1992-2017, making it the top-selling PPI, or proton-pump inhibitor, on the market.

This level of success wasn’t without problems, and AstraZeneca has faced plenty of those in recent years in the form of lawsuits on behalf of angry patients who suffered serious side effects from the drug. Some plaintiffs suffered from headaches or constipation, while others experienced severe kidney failure.

You might remember Nexium as “the Purple Pill.” That’s how it was touted in countless commercials and web advertisements, being presented as the logical treatment for heartburn-prone people who just really love to barbecue. The message was clear: If stomach acid is a problem for you, Nexium can fix it!

Almost chemically identical to Prilosec, another powerful PPI produced by the same manufacturer, Nexium (also known as esomeprazole) is the third best-selling drug of the past quarter-century. It is available by prescription, over-the-counter, and in generic versions.

Prescription Nexium is used to treat the following conditions, among others:

Possible Nexium complications and side effects

Here is a list of side effects and complications, both short- and long-term, that can happen because of taking Nexium:

FDA and government actions regarding Nexium and AstraZeneca

The Food and Drug Administration has published several warnings about Nexium since its mass-market approval in 2001. In 2010, they issued a warning regarding the increased risk of spine, hip and wrist fractures for patients who have been taking a PPI medication for a year or longer.

The following year, an additional warning was released regarding low magnesium levels after long-term use of PPIs, which results in dizziness, tremors, and other symptoms. In 2012, the FDA stated that long-term PPI patients might experience severe diarrhea.

In 2014, the FDA declared that long-term use of PPIs like Nexium caused vitamin B12 deficiency, which also leads to memory loss and cognitive issues. Later that year, the FDA updated the label again to reflect the possibility of patients developing acute interstitial nephritis, a condition that can lead to kidney failure.

Still later that year came the announcement regarding pregnant women who take Nexium; they were instructed not to use it unless there were no other options because of the risk of fetal congenital malformation.

Nexium has serious side effects, like vomiting, kidney failure, and fetal congenital malformation. Are you at risk? Tweet this

The last warning from the FDA came in 2016 and was aimed at lupus patients. Nexium could potentially induce the onset of lupus (drug-induced Lupus Erythematosus) or exacerbate the existing condition.

The government continues to keep a close eye on this medication, though their efforts to intervene haven’t always worked. On November 21, 2016, an appellate court ruled in favor of manufacturer AstraZeneca after they paid millions to delay generic versions of Nexium from hitting the market.

In 2015, AstraZeneca settled with the Justice Department for $7.9 million in relation to an illegal kickback scheme. They had formed an improper relationship with Medco Health Solutions, a pharmacy benefit manager, that violated the Federal Anti-Kickback statute.

Multidistrict litigation (MDL) is a common type of federal legal procedure that groups together cases from all across the country that share similar facts. By consolidating, courts are able to keep the discovery process from becoming duplicative, and the process goes faster for everyone involved.

This type of negligence is called pharmaceutical liability, which is a type of defective product. When a medication is scrutinized by the courts, it falls under one of the following categories:

Nexium cases are part of an overarching MDL comprising all proton-pump inhibitor medications and their relation to kidney damage. The case, which currently contains more than 4,200 individual lawsuits, was filed in the United States District Court in New Jersey and is called In Re: Proton Pump Inhibitor Products Liability Litigation. Defendants include the manufacturers of Nexium, Prilosec, Protonix and Prevacid. A previous MDL was decided in favor of AstraZeneca in 2014.

Enjuris tip: Experiencing pain and alarming symptoms or side effects after taking Nexium? Speak with your doctor before pursuing a lawsuit.

These lawsuits center around one key claim: that patients were not adequately warned about potential kidney complications before taking PPIs, and they didn’t know the right questions to ask.

Other common claims include:

The first bellwether PPI trial is slated for September 21, 2020.

There are currently no class action lawsuits against Nexium. There are a few notable differences between MDLs and a class action. Before any class action can begin, the plaintiffs must be certified as a single, cohesive class. The Federal Rules of Civil Procedure state that class certification requires four thresholds be met:

Another form of litigation is the mass tort, which is similar to a class-action lawsuit. They both have large groups of plaintiffs; the defendants are common in every case; and the lawsuits are consolidated for efficiency’s sake. However, mass torts treat plaintiffs individually, while class actions have a chosen class representative. As mass torts can have small numbers of plaintiffs, this is often chosen as a legal vehicle when the criteria for a class action is not met.

There are currently no Nexium mass torts, given the existing MDL in New Jersey’s district court.

The Judicial Panel on Multidistrict Litigation might decide to intervene in your lawsuit by joining it with an existing MDL. For this type of litigation, it makes more sense than an individual case. Patients can pursue claims through state court if the defendant is headquartered within their home state. If the defendant is located in another state, the case will be filed in federal court. (This is because of a legal theory called “diversity jurisdiction.”)

This theory makes no difference to a plaintiff except for where the case is filed. However, federal claims are typically restricted to litigation involving:

Your lawyer can explain more about this process.

If you think Nexium is causing health problems or unpleasant side effects, make sure to see your health care professional first and foremost. This way, you can find out for sure if the drug is affecting you adversely. If you have been taking Nexium and are experiencing symptoms that alarm you, start keeping a record of how you feel and, when you feel it. You can get started now by downloading our free pain journal.

If your doctor makes that critical connection, then it’s time to speak with an attorney.

Every state has a statute of limitations. This is the time window available for you to file a case, and the clock starts ticking from the date of injury. Some states offer only one year in which to file claims for personal injury. For this reason, it’s important that you contact an attorney as soon as possible if you believe you’ve been affected.

Here are questions to ask a personal injury attorney to ensure a good fit between you and your lawyer.

If you haven’t met with an attorney yet, try the Enjuris lawyer directory to find someone in your state and with the right experience in pharmaceutical liability cases.

Ready to learn more about a Nexium lawsuit?

If you believe your health issues and pain after taking Nexium may merit a lawsuit, check out these resources: