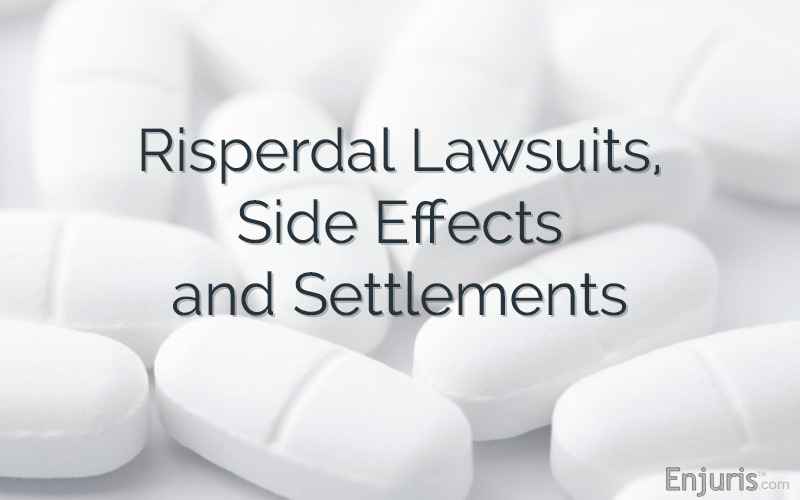 Side effects, settlements and how to find a lawyer

Many men and boys who were prescribed Risperdal have a bone to pick with its manufacturer. Why? Well, there were various reasons, one being that the antipsychotic medication was not even approved to treat certain conditions for which it was being prescribed.

The most important reason is that it causes men to develop gynecomastia, a condition resulting in the enlargement of male breasts.

Interestingly enough, this side effect is hardly mentioned on its label, and certainly not in reference to men.

It sure is mentioned in Risperdal lawsuits against the pharmaceutical companies behind the drug.

FDA and state actions regarding Risperdal

Risperdal was approved in 1993 for one very specific use: the treatment of schizophrenia in adolescents and adults. The Food and Drug Administration added bipolar disorder and autism spectrum disorders later, though many doctors prescribe Risperdal off-label for conditions like ADHD, depression, anxiety and more.

The company made an astonishing $18 billion in profits over two decades, hitting a dizzying height in 2007 when J&J subsidiary Janssen Pharmaceuticals raked in $4.5 billion. By 2012, however, the patent expired and they were only able to make $358 million.

The FDA took notice of J&J’s actions regarding Risperdal, including illegal marketing toward children, treating conditions for which it hadn’t been approved, and paying kickbacks to doctors and pharmacies that promoted its product.

Risperdal carries what is known as the “black box warning,” which is the strongest label the FDA has. It means the medication causes serious side effects, including death. This came about in 2005 after Risperdal was found to affect elderly patients with dementia who were aggressive or psychotic. (The pharmaceutical company had even created a 136-person task force, “ElderCare,” to market this new use for the medication.) The drug caused these patients to stroke or die because of cardiac-related events.

Risperdal can cause strokes in elderly patients with dementia and breasts in men. Tweet this

The FDA accused companies manufacturing Risperdal and its generic version in 1999 and again in 2004 of illegally marketing the drug for unapproved uses, concealing risks, and claiming benefits without proof. J&J ended up spending $2.2 billion in settlement, one of the largest in the history of healthcare fraud.

Then the states came after them, snatching up millions in damages while the company continued to claim it did nothing wrong. These ranged from a $5.9 million settlement in Montana to a $327 million award by a South Carolina jury (which was lowered to $124 million).

Multidistrict litigation (MDL) is a type of federal pleading that groups together similar cases from all across the nation. By consolidating and not duplicating discovery, the cases are streamlined and proceed faster for everyone involved.

This type of negligence is called pharmaceutical liability, a type of defective product. When a medication is brought under this type of scrutiny, it must fall under one of three categories:

Most Risperdal cases have not been part of MDLs; they have been brought as individual lawsuits, mass torts or by states as a whole. There have been a few notable successes to date, though others have been dismissed for lack of evidence.

Enjuris tip: Experiencing pain and alarming symptoms or side effects after taking Risperdal? Speak with your doctor first and eliminate other possibilities before pursuing a lawsuit.

Patients claimed that J&J knew the medication would harm people, but sold it anyway in their “desire for market share.” The label did not warn of potential risks and complications; J&J knew or should have known its product was dangerous, since they sold it for uses not approved by the FDA.

There are currently no class actions for  Risperdal. There are a few notable differences between a class action and multidistrict litigation; before any class action can proceed, the plaintiffs must be certified as a class. There are many steps to take and hoops through which to jump, hence the individual lawsuits.

Enjuris tip: Should your pharmaceutical liability lawsuit be brought alone, or as part of a mass tort or class action? A products liability lawyer can help you determine which is best.

Many Risperdal lawsuits have actually taken form as mass torts, which are very similar to class-action lawsuits. They both have large groups of plaintiffs; the defendants are the common denominator in every case; and the lawsuits are consolidated into one group. The key difference is that mass torts treat each plaintiff as an individual, while class actions have a representative for the entire class. As mass torts can include small numbers of plaintiffs, this is often chosen as a legal vehicle when the criteria for a class action is not met.

This doesn’t make much of a difference to you except the building in which you file, though federal cases are generally restricted to claims involving a.) the U.S. Constitution, 2.) federal laws, 3.) citizens of different states [if the amount in controversy is more than $75,000], 5.) the United States is a party, or 6.) copyright, patent, maritime and bankruptcy cases. Your attorney will be able to explain more about this process.

If you think that Risperdal is causing side effects, your first place to go is to your doctor’s office. He or she will reveal whether the prescription is causing pain, mood swings, tissue enlargement or other complications.

If you have dealt or are dealing with side effects and your doctor says it’s because of Risperdal, talk to a lawyer.

Keep in mind that every state has a statute of limitations, after which you will no longer be able to file a lawsuit. Some states offer one year in which to file claims for personal injury, so protect your rights and file. You can always change attorneys afterward if necessary. Here is a worksheet with questions to ask a personal injury attorney to determine if that lawyer is good for your case.

If you have not met with a lawyer yet, consider checking the Enjuris attorney directory for someone in your state.

This is a powerful antipsychotic used to treat schizophrenia, bipolar disorder and irritability in those with autistic disorders. It alters brain chemicals upon breaking down in the liver; the broken-down components are called metabolites, and those block serotonin and dopamine in the brain, which stabilizes mood swings and calms erratic behavior.

Possible Risperdal side effects and complications

Here is a comprehensive list of health complications and side effects that can arise as a result of taking Risperdal:

Ready to inquire about a Risperdal lawsuit?

If you feel your complications and pain after taking Risperdal may warrant a lawsuit, these resources will be helpful: