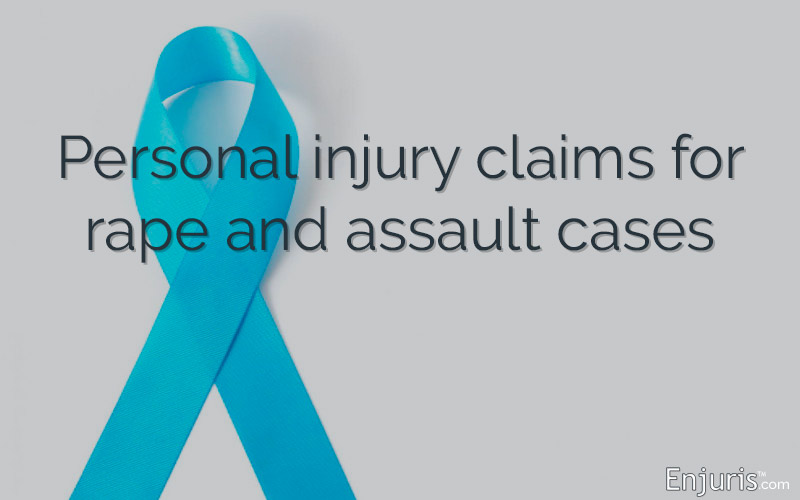 Table of Contents + show
Third parties and insurance held liable for attacks – recovering compensation after a rape
Attacked in her own home
How to proceed with a civil case
Insurance can sometimes cover assault
Reviewing the three prongs of a personal injury case
Nuts and bolts of a civil case
Assault and battery
Special, elevated duty of care
Other potential civil cases
Steps to making a civil claim

A trusting patient with an unscrupulous doctor; a train passenger trying to enjoy a peaceful journey; and a young woman sleeping in her own home. All victims of sexual assault committed by perpetrators who were later found liable for their crimes.

Those findings provided much needed financial restitution for the victims’ pain and suffering.

After an attack, sexual assault and domestic violence survivors are often focused on healing, both physically and emotionally. What they may not realize is that financial compensation from a civil lawsuit could help pay for medical bills, relocation, lost wages and numerous other expenses that they may be forced to deal with as a result of being attacked.

Financial compensation from a civil lawsuit could help pay for medical bills, relocation, lost wages and other expenses

Civil remedies can also help prevent other incidents of violence by holding third parties responsible for their failure to put a stop to these often foreseeable crimes, according to Colleen M. Quinn who runs the Women’s Injury Law Center out of the firm Locke & Quinn in Richmond, VA. The Center provides legal services for women who want to be represented by women.

Colleen launched the Center in part to raise awareness for victims of rape and sexual assault who may not realize that there are potential civil recoveries that they can receive, in addition to a criminal case.

Attacked in her own home

While there can be compensation in a criminal trial, it is often minimal compared to a potential civil case outcome, especially if a third party is involved, Colleen said.

One case involved a maintenance worker in an apartment complex who raped and stabbed a woman, leaving her to die in her own home.

The woman hired Colleen and they launched a civil case against the temp agency that employed the maintenance worker, which had failed to do a thorough criminal background check on him, and against the apartment complex, which did not allow tenants to install deadbolts in their apartments.

Both companies were found liable and the woman received $3 million in settlement. The settlement helped cover her therapy and other recovery needs, including her move to a house in a safer part of town with a security system.

Colleen, herself a domestic violence and stalking survivor, worked during law school with battered women’s programs and realized that nobody was creating awareness for women on their potential civil rights in these cases.

“A civil lawyer can make sure that every stone has been turned over and that all remedies are looked into,” Colleen said.

How to proceed with a civil case

“Victims do not typically receive compensation from the assailant unless there is the potential of recovery in the form of professional malpractice or homeowners,” Colleen said.

There are three basic components to any civil tort action: liability, damages and collection.

When evaluating the feasibility of a sexual assault case, it is ideal to start with assessing the third component: collection, Colleen said. “No matter how severe the damages and how clear the liability – if there are no assets worth pursuing and nothing to recover for the victim – then why bother?”

Viable or not? A civil case for sexual assault starts with assessing potential monetary outcome Tweet this

There are certain situations that lend themselves more easily to a successful civil case. For example, malpractice may come into play if the perpetrator is acting in a professional capacity, such as a doctor who assaulted his or her patient.

“We had a client who sought medical attention for neck and shoulder problems, and her doctor performed vaginal and breast examinations, which he convinced her were necessary for treatment,” Colleen said. “There was no nurse in the room. During the third exam, the client noticed that the doctor had an erection. Then the light bulb went off in her head that something wasn’t right here.”

The client successfully sued the doctor through his malpractice insurance.

However, not all claims involving doctors are successful.

In another such case, by the time the doctor had assaulted Colleen’s client, so many complaints had been filed against him by other women that he was already in the process of losing his medical license. Malpractice insurance therefore wouldn’t cover the claim against him and the woman only received a minimum amount of private money from the former doctor.

If the assault happens outside of a professional situation, there may still be opportunities for compensation.

However, nearly all insurance policies will cover negligent or reckless acts. For example, in another case of Colleen’s, a drunk man allegedly sexually assaulted a woman on a train, leaving finger marks on her breasts and thighs. However, the man claimed that the train turned suddenly and that he lost his balance. In his scramble to get up, he claimed that he accidentally left the bruises on the woman.

While this excuse led to a plea agreement in the criminal case, it actually helped the victim in the civil case. Because the alleged molester had condominium coverage and argued that the assault was accidental, the case settled for a respectable sum under his homeowners' insurance, which covered accidental damages.

The defense argued that the assault was accidental - the case settled for a respectable sum under his homeowners' insurance, which covered accidental damages.

However, intentional versus accidental can be difficult to prove. For example, if someone is beaten by a spouse or domestic partner, it is considered an intentional act and not covered by homeowners' insurance.

On the other hand, if a third party fails to act to stop an assault, there may be a claim.

Before she represented plaintiffs, Colleen was a defense attorney. She represented the liability homeowners' insurance in a civil case where a grandfather was molesting children in his home. Since the grandfather’s acts where intentional, his homeowners' insurance would not cover the claim. However it appeared that it would cover a claim against the grandmother because she failed to act to prevent the abuse.

Reviewing the three prongs of a personal injury case

There are three prongs in deciding whether or not a criminal assault can be pursued as a personal injury case. In Virginia, where Colleen practices, she looks at liability, damages and collections.

“Collections is actually the first prong. If you can’t collect it doesn’t matter how much the liability or the damages are,” Colleen said. “The whole idea is to get some recovery for this poor victim.”

The amount of money a victim can get often depends on how bad the injuries are and what fees will be required for medical treatment and continued therapy. Most cases reach confidential settlements before they reach trial.

There are cases where there is some compensation potential, but the emotional toll might be too much for the client to bear. “You have to be careful of not re-victimizing the victim in these cases. Sometimes it’s better to put [the assaulter] in jail and let the victim move on,” Colleen said.

“We get calls every week with these types of cases. Recently a woman was raped by her uncle and they wanted to pursue a civil case, but he had no assets and there was no bystander who allowed it to happen,” Colleen said. “In those situations I have to say I’m sorry, I know that there is clear liability but there is nothing worth going after.”

When does a premises owner have a duty to prevent an assault? If the owner knows about recurring crimes, or they know about a crime that is happening at the time and do nothing about it, they can be held liable, Colleen said. For example, in areas that are crime ridden but don’t have adequate lighting or surveillance, the owner can be held liable. However, this is only true if there were prior bodily assaults in the area, rather than thefts or other non-violent incidents.

Nuts and bolts of a civil case

Pursuing civil actions after an assault can be challenging and it is important to determine the severity of the injury and the applicable damages, which need to be sufficient enough to warrant a decent settlement. Factors include:

It is important that the victim obtains mental health counseling during this process, Colleen said. “Post traumatic stress disorder and many anxiety disorders are typical injuries to victims of crimes, but those disorders often go undiagnosed unless the victim is receiving treatment by qualified mental health professionals.”

Most states recognize a civil cause of action for assault and battery. For example, a victim of sexual assault may bring an action for false imprisonment against a perpetrator of a sexual assault if the victim had his or her freedom of movement restrained during the attack.

Employers may be held liable in assault and battery cases if an employee acting in the scope of his or her employment, within the ordinary course of business, commits an assault. Employers also have a duty to inquire as to the employee’s “past record, habits, or general fitness for the position” of hire.

As in the case of Colleen’s client who was raped in her own home, a landlord can be held liable for the actions of their employees under a provision known as Special, Elevated Duty of Care.

Parties that are shown to have a special relationship with the victim include include landlords, innkeepers, hospitals, psychiatric institutions, nursing homes and schools.

According to Colleen, examples of third party liability arising out of special relationships include:

There are other scenarios that could result in financial compensation for the victim, including an assault occurring within the course of the victim’s employment, which could amount to unlawful sexual harassment under the Civil Rights Act of 1964.

An assault or other violent crime that involved a member of the federal government may also become a civil case.

Steps to making a civil claim

Sexual assault and domestic violence survivors should first and foremost work with police to pursue criminal charges against the attacker. As part of both the criminal and civil cases it will be important for the victim to preserve evidence from the attack. They should also seek the help of medical and mental health professionals as they are working through the trauma.

When considering a civil case, victims should also be aware of the statute of limitations, which is generally two years for tort action. If they desire to pursue a civil suit, they should contact an attorney with experience in this area of law.

Victims also may need additional therapy to help deal with the stress of a civil suit, Colleen said. The most important thing for both the client and the attorney to remember is to not be victimized all over again by the legal process.

Have you been a victim of assault and wished to pursue civil action? Please share your story below.