Accident Help (Home) » Injury Blog » When Should I NOT Be a Good Samaritan? 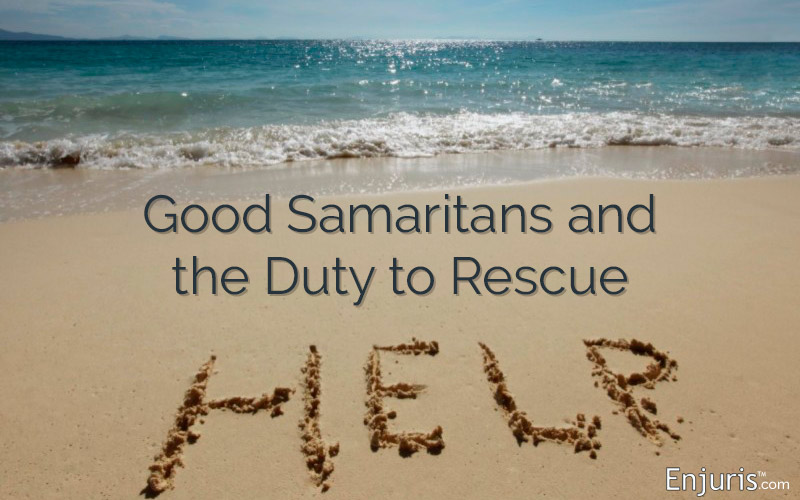 Everyone wants to be a hero. They want to swoop in at the last moment, saving the helpless child from a burning building or the little duckling from a rushing storm drain and say, “Yes, that was me. I did that!” Then they get the key to the city for their bravery and pose for a picture in the newspaper.

Sometimes trying to help out, though, can only get in the way. We thought that we would take a look at Good Samaritan laws, because sometimes people have the best intentions... but things just don’t turn out the way they should.

Being a Good Samaritan

Each state has its own version of the Good Samaritan law, also known as the “duty to rescue” or “volunteer protection” laws.

They usually apply to those providing medical assistance, like the classic example of an off-duty doctor or nurse stopping on the side of the road to help a car crash victim. However, it could also apply to a drowning victim that someone swims out to help.

Concerning the doctor or nurse, that “off-duty” part is important. If the help was not in his or her capacity as a medical professional, then it was not covered by any sort of liability insurance. However, it would be covered by the Good Samaritan law of that particular state as long as he or she used reasonable care and the resources available at the time.

The laws won’t protect you if your actions were reckless or careless in any way. You can still be sued for civil or criminal damages if your help actually made the situation worse or injured the person further.

The important part to remember about being a Good Samaritan is that the laws won’t protect you if your actions were reckless or careless in any way. You can still be sued for civil or criminal damages if your help actually made the situation worse or injured the person further. This would fall under tort or criminal law, depending on how severe the actions were.

The duty to rescue

Generally speaking, there is legally no duty to rescue another person.

The courts have gone into very gory details in order to explain this. In Buch v. Amory Manufacturing Co., the defendant had no obligation to save a child from crushing his hand in a manufacturing machine. The court suggested an analogy in which a baby was on the train tracks – did a person standing idly by have the obligation to save him? Legally, no. He was a “ruthless savage and a moral monster,” but legally he did not have to save that baby.

An interesting and solid case to the contrary is Soldano v. O’Daniels, where the Court of Appeals of California bucked convention and stated that an employee did have a duty to help.

In that case, a Good Samaritan requested that a store employee use the phone to call the police, as a person was being threatened in a bar across the street. The employee denied the use of the phone to the Good Samaritan and refused to place the call himself. The person ended up dying, and the Court said, enough is enough. This person would not have died if that call had been placed, and someone has to take responsibility. They felt it was time to reexamine the traditional relationship of responsibility.

Normally, however, there is no duty to rescue. Soldano is a unique quirk in the legal system that has not overcome the four categories of duties, which we shall now discuss.

When someone is in peril, injured or somehow incapacitated, there are certain situations in which a duty to rescue is pre-established. In these cases, reasonable assistance would need to be provided, and failing to come to the rescue of these parties would be grounds for liability.

Once a person begins a rescue, they have a legal obligation to finish it. Tweet this

The court also discussed the theory of “omission,” where the absence of an act (here, neglecting to take care of a baby) resulted in someone’s death, which is chargeable with manslaughter. It’s a difficult balance.

Be careful when you help

Sometimes you will desperately want to help, and that’s a good thing. That is the right reaction to have. For instance, there might be baby ducklings on the highway that are about to be run over. You’ll have to make a choice: Let them be run over, or get out of your car and save them.

However, you might end up causing an accident yourself.

If you come across an accident, you don’t have to pretend to be a hero if you’re not ready to be one.

Don’t assume responsibility to help someone if you don’t know what to do. Tweet this

If you did expose yourself to civil liability and need to know how to protect yourself, consider speaking with an Enjuris attorney.