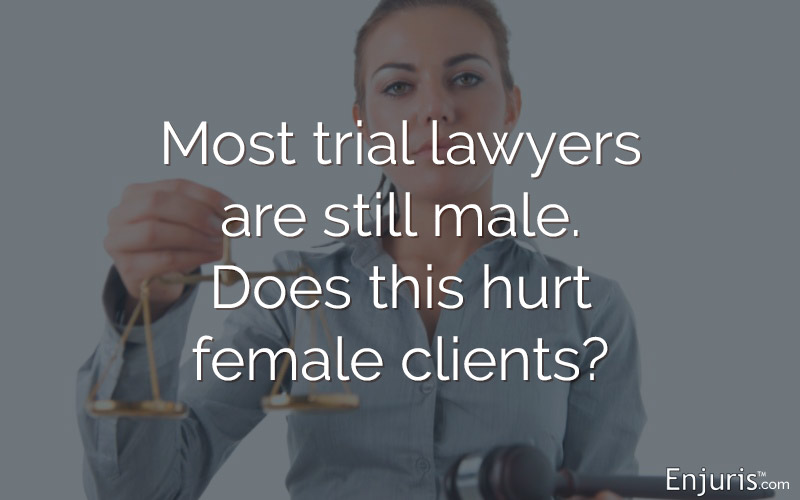 Table of Contents + show
Study shows the vast majority of trial lawyers are still male – why a female attorney can benefit your case and where to find one
Where are the female tort lawyers?
Some law firms stepping up
Women getting a seat at the table in class-action cases
Finding female attorneys
Benefits to having a female lawyer

A woman with horrific scarring after a botched breast reduction; a rape survivor suing her landlord for hiring the convicted criminal who attacked her; a class action lawsuit against a transvaginal medical product - all scenarios where plaintiffs might feel more comfortable working with a female personal injury attorney.

However, they may struggle to find one. An ABA study titled "First Chairs at Trial: More Women Need Seats at the Table", discovered (using 2013 data) that women represented just 32% of lawyers on civil cases, 27% at trial, and 24% as lead counsel. This is in comparison to 68% of men taking on civil cases, 73% showing up to trial, and 76% being appointed as lead counsel.

The report notes that the disparity is even higher in tort (personal injury) cases, with 79% of lead counsel being male, and only 21% being female.

"What these numbers show is that the steps to the role of lead counsel and trial attorney are much steeper for women than men," the report states. "...While women lawyers have been entering the profession in large numbers for three decades, they have not advanced at nearly the same rate as men."

The ABA also notes that "all of these issues apply with even greater force to women trial attorneys of color, who face the double bind of gender and race."

The reports cite the impact of children and other family responsibilities on women's careers; bias in the law field; male-centered social norms; outdated law firm cultures, policies and the short-term business focus of many firms among other factors in this disparity.

Where are the female tort lawyers?

Despite the fact that women have been getting law degrees for decades, there has not been a proportional growth of women in leadership positions at plaintiff-focused law firms.

"Since 1980, women have earned at least a third of all law degrees; currently the figure is 47%. So we are not talking about a sudden influx of women in law," said Rayona Sharpnack, founder and CEO of the Institute for Gender Partnership™ and the Institute for Women's Leadership. "They have been joining Big Law firms for decades."

"But they don't get much of anywhere. Today they make up 45% of associates—but only 25% of nonequity partners and 15% of equity partners," Rayona said. "Traditionally biased attitudes, lack of challenging opportunities, inequality in compensation, and lack of professional recognition methods all contribute to keeping women from making a full contribution to their profession of choice."

As a result Rayona says, there are fewer women lawyers – especially fewer high-powered ones – available to fight the good fight for women clients.

Jennifer Kain Kilgore, attorney editor at Enjuris.com, recalls that her law school class had far more women than men enrolled, and that this year her school's daytime class actually has 68% female enrollment.

"We definitely outnumbered the boys," she said. "Most of us went on to do great things. We've only been out for the better part of four years, though, so none of us would be partners yet unless we started our own firms -- which some of us did! I have a fair number of friends who started practices because they were dissatisfied with the opportunities in the legal market."

Stephanie M. Tucker, a personal injury lawyer at The Babcock Law Firm in Denver, Colorado, says, "I think it is absolutely true that female attorneys face an uphill battle in the legal world – especially when it comes to personal injury and trial work. The playing field needs to be evened by doing away with the outdated business practices and biases that seem implicit, especially in some of the larger personal injury firms. With that said, I think the result of the current climate is that the women who do make it as trial attorneys are among the best of the best. They overcome the inherent bias they face by being the best prepared attorney in the courtroom."

Some law firms stepping up

While the disparities remain high at the class-action level, there are some individual attorneys and smaller firms that are seeking to address the gap in personal injury law.

Colleen M. Quinn runs the Women's Injury Law Center out of the firm Locke & Quinn in Richmond, VA, where she is a partner. The Center provides legal services for women who want to be represented by women.

She launched the Center because "it was clear to me that there were injury issues unique to women, especially in the areas of civil recovery for rape and sexual assault, head injuries that affect women differently and plastic surgery and cosmetology injuries," Colleen said. "In many of these areas women prefer to work with a female attorney."

Colleen also wanted to raise awareness for victims of rape and sexual assault who may not realize that there are potential civil recoveries that they can receive, in addition to a criminal case.

While there can be compensation in a criminal trial, it is often minimal as compared to a potential civil case outcome, Colleen said. For example, one of her clients was raped, stabbed and left to die by a maintenance worker at her apartment complex.

Colleen and her client launched a civil case against the temp agency that employed the worker, which failed to do a thorough criminal background check on him, and the apartment complex that did not allow tenants to install deadbolts in their apartments.

Both companies were found liable and the woman received $3 million in settlement, which helped cover her therapy and other recovery needs, including her move to a house in a safer part of town with a security system.

Colleen, herself a domestic violence and stalking survivor, worked during law school with battered women's programs and realized that nobody was creating awareness for women on their potential civil rights in these cases.

"A civil lawyer can make sure that every stone has been turned over and that all remedies are looked into," Colleen said.

Victims in scenarios like this find empathy and comfort from having a female attorney, Colleen said.  "I have a good appreciation of what they are going through and it makes it easier for them to open up. I also make sure that therapists are still involved with the victims during the civil case."

The Center also takes a different approach to traumatic brain injuries, arguing that women are impacted differently than men.

"Women have unique multi-tasking abilities," Colleen said. "I describe it as women having 10 dresser drawers open and working on them all at once. Head injuries can impact that focus and attention in a different way for women."

There are also medical issues where women may feel more comfortable dealing with a female attorney, such as a botched breast reduction surgery or cases involving scars or disfigurement. But Colleen doesn't see many firms reaching out to women in the way that hers does. She feels that it gives her firm an advantage when talking with clients.

"I saw all of these areas and just wanted to make sure that women knew there were empathetic female attorneys to help them," Colleen said.

Women getting a seat at the table in class-action cases

Since the 2013 ABA report there has been some progress for female representation in class action lawsuits. As a Law360 article notes, female lawyers are gaining influence in multidistrict litigation (MDL).

The first female-dominated plaintiffs' steering committee was formed after U.S. District Senior Judge Kathryn H. Vratil gave a speech at a 2014 MDL conference at Duke University, where she called for greater diversity among plaintiffs' leadership.

The following November, in a product-liability MDL involving power morcellators, the judge worked with attorneys to appoint the first female-majority plaintiffs' steering committee. (Power morcellators were found to potentially spread cancer and decrease the long-term survival of patients when used to remove uterine fibroids.)

While their numbers may be less, there are ways of finding female attorneys to represent you in a personal injury or other civil case.

The American Bar Association provides links to national and local women lawyers' associations, some of which provide listing of local attorneys.

Many state bar associations have a women's network and local contact information. For example the,  Women's Bar Association of Massachusetts offers a directory for female attorneys broken down by practice area.

Looking at smaller law firms that employ female attorneys may also be a viable route. Says Stephanie, "I chose to work for a smaller firm where it was more likely that all members of the practice would be treated equally and evaluated on merit. At The Babcock Law Firm, as one of initially two, and now three attorneys, I have gained invaluable courtroom experience through the opportunity to litigate my own cases. I think that many of our clients, women and men alike, immediately pick up on our firm's core values and culture and feel comfortable working with us. I am sure that a handful of our female clients sought us out specifically to work with a female attorney, but others simply sense that we are a more contemporary and down-to-earth firm that focuses on providing the best possible legal representation without worrying about gender and social norms."

Benefits to having a female lawyer

In addition to adding personal comfort for some plaintiffs, having a female lawyer can also offer practical benefits, according to the ABA report:

"Women lawyers have many advantages in the courtroom—they connect well with jurors, particularly with women jurors, who often comprise half or more of the jury pool; are viewed as more credible and trustworthy; and are in many instances overprepared rather than underprepared. Women litigators have ample reason to be confident in their effectiveness as trial counsel."

Have you been involved in a personal injury or medical malpractice suit where you would have preferred working with a female attorney? Did you have difficulty finding one available to take your case? Please share your story below.