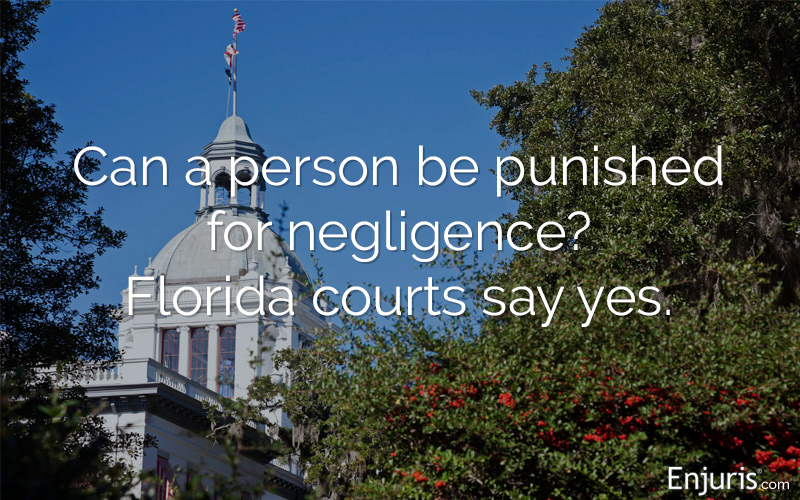 Does someone deserve to be punished for your injury?

It might feel that way, but Florida’s courts have strict standards for when a plaintiff can be awarded punitive damages.

What are punitive damages?

Punitive damages are designed to punish a defendant, or to deter that defendant (or a similar one) from repeating the behavior that resulted in the injury.

Punitive damages may be awarded in a civil claim where the court finds that the defendant’s action (or failure to act) was grossly negligent or intentional. Punitive damages are in addition to any compensatory damages the plaintiff recovers, which means they’re calculated separately from damages associated with medical treatment, lost wages, property damage, pain and suffering, and other claims.

Before you jump to attach punitive damages to your personal injury claim, be aware of these facts, which are from the most recent report by the U.S. Department of Justice:

It seems that courts are awarding punitive damages less and less frequently.

The DOJ reported that the percentage of plaintiffs who were awarded punitive damages in a tort trial declined by one-third (33%) between 2001 and 2005. In medical malpractice cases, in particular, the percent of punitive damage awards decreased by almost half. In product liability cases, the decrease was even more pronounced at more than 70%.

If you suffered a personal injury in Florida, one of the first steps in the legal process is for your lawyer to calculate how much you’re going to claim in damages.

Your lawyer will rely on their own experience in other cases, along with detailed records of exactly how much your injury cost for medical treatment, property damage, lost wages, and other items that have a specific financial value. If necessary, they’ll consult medical experts, actuaries, accountants, and other financial professionals to determine not just what costs you’ve already incurred, but also what you’re likely to incur in the future related to the injury.

They’ll also look at compensable damages that don’t have a specific monetary amount. These include pain and suffering (emotional distress), loss of consortium, loss of capacity for your normal activities, and other causes of action.

Enjuris tip: Find out how much your injury claim is worth.

Punitive damages become a separate category in a civil lawsuit. As a plaintiff, you can “win” your case through a settlement or at trial and be awarded the damages you requested. But that doesn’t mean you’ll receive a punitive damages award, too.

The Florida Supreme Court established that the defendant’s actions must be “fraudulent, malicious, deliberately violent or oppressive, or committed with such gross negligence as to indicate a wanton disregard for the rights of others.” (W.R. Grace v. Waters, 1994)

A plaintiff must prove either intentional misconduct or gross negligence in order to be awarded punitive damages in Florida.

The exception is for cases where the defendant’s intentional misconduct was for the purpose of financial gain — in other words, if a person or entity caused injury (or failed to avoid someone’s injury) because they knew they could make money. If that’s the situation, the court can award punitive damages up to 4 times the amount of compensatory damages or $2 million, whichever is greater.

Florida is among several states that have a different set of damage caps for punitive damages in medical malpractice cases.

If you’re a plaintiff in a Florida medical malpractice lawsuit, you could recover up to $500,000 in punitive damages against a doctor or other medical care provider. If the defendant isn’t a practitioner (a hospital, for example, but not a specific doctor), you can recover up to $750,000.

There’s another important aspect to punitive damage awards that only apply in a Florida medical malpractice lawsuit.

A jury isn’t instructed about damage caps prior to deliberations. In other words, when the jury deliberates about how much to award a plaintiff, the members don’t know that there’s a $500,000 (or $750,000) limit. That means the jury offers the judge a figure for what the members actually believe a plaintiff should be awarded. The judge is then permitted to award damages higher than the limits.

The judge can override the damage cap if they think the case specifically merits a higher award.

Again, these are examples, but they’re definitely not the entire range of lawsuits that could lead to a punitive damage award.

If you were severely injured in a way that might warrant punitive damages, you’ll need an experienced, compassionate lawyer to help you get what you deserve. Punitive damages, by their nature, are awarded in lawsuits where the injury is serious, life-changing, and long-lasting. Assessing the correct amount of compensatory damages to cover your expenses is just as important as requesting additional punitive damages.