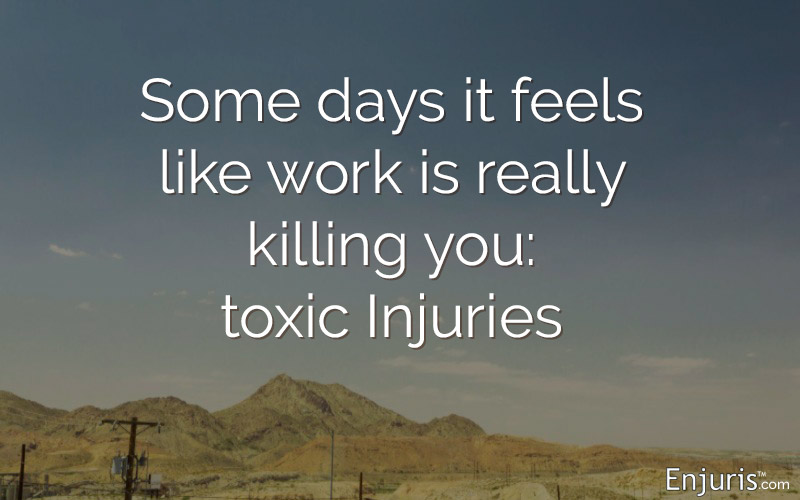 What legal options exist if you’re injured by a toxic substance in Texas?

Chemicals have been an important part of industrialization, and they're a vital part of many of the products that we use on a daily basis.

Texas leads the nation in petroleum refining and chemical products production. The state is also a global leader in the closely related petrochemical industry.

Unfortunately, toxic chemicals can be detrimental to a person's health and well-being if they’re improperly handled or disposed of irresponsibly.

Let’s take a look at toxic tort claims in the Lone Star State.

What is a toxic tort?

Here are the 4 most common ways a toxic tort claim arises:

Real Life Example: BP agreed to settle 25,000 claims from a toxic tort lawsuit with more than 25,000 people who were exposed to toxic emissions from its southeast Texas refinery.

What injuries are caused by exposure to toxic substances?

Exposure to toxic substances can cause serious injuries and even death. Here are some of the more common injuries:

If you think you’ve been injured by a toxic substance, one of the most important things you can do for your case is to keep detailed records of your injuries.

Real life example: You might’ve heard in the news about a variety of Monsanto Roundup lawsuits that relate to people who’ve become ill following exposure to its active ingredient, glyphosate.

What legal theories support a toxic tort claim in Texas?

If you’ve been injured by a toxic substance, you may be able to receive compensation for your injuries. Though it’s recommended that you speak with an experienced Texas attorney to determine the most appropriate legal strategy for your case, there are 3 common legal theories that can support a toxic tort claim in Texas.

For example, if you live near an oil refinery and develop cancer as a result of a harmful chemical being released into the air, you must prove that the company operating the oil refinery owed you a duty to take care not to injure you. You then need to show that the duty was breached (i.e., that the company carelessly released a harmful substance into the air). Finally, you need to show that the chemical actually caused your cancer (rather than something else, such as bad genes or some other chemical exposure).

If you were harmed by a toxic substance while at work, you can (in most cases) file a workers’ compensation claim.

Workers’ compensation is a form of insurance that pays medical expenses and lost wages to employees who are injured while on the job. Most employers are required to carry workers’ compensation insurance and injuries are generally covered so long as the injury occurred during the course of employment (i.e., while the employee was completing an assigned work task).

One of the benefits of workers’ compensation is that—unlike a negligence lawsuit—you don’t need to prove that your employer did anything wrong in order to receive compensation for your injury.

If a company knows a substance is dangerous, but conceals the danger or misleads the public about the seriousness of the danger, the company may be liable for intentional misrepresentation or fraud.

For example, let’s say a government agency learns that a water supply is contaminated, but tells residents that the water is safe to drink. A resident who drinks the water and gets sick may be able to establish an intentional misrepresentation or fraud claim against the government.

Enjuris Tip: While the statute of limitations for most toxic tort claims is 2 years, cases brought against the government must be filed much sooner.

Tying together your exposure to the toxic substance and your injury is the hardest part of any toxic tort claim. You have to illustrate that the exposure was the "immediate cause" of your injuries and that you wouldn’t have suffered your injury but for the specific exposure. This can be incredibly difficult considering that many symptoms don’t appear for days or even years after exposure.

For example, let’s say you develop lung cancer. You worked as a laborer on a job site back in the 1960s, and part of your job included dealing with asbestos fibers. Now, you need to prove that those specific asbestos fibers caused your cancer.

This means that but for those asbestos fibers, you wouldn’t have developed cancer.

This can be particularly difficult to prove in Texas, which responded to a huge wave of asbestos litigation by requiring that plaintiffs prove that the asbestos-containing product was a substantial factor in contributing to the aggregate dose of asbestos the plaintiff inhaled. (In most other states, the plaintiff need only to show that they had frequent, regular, and proximate exposure to asbestos.)

Proving causation when it comes to asbestos exposure cases is harder in Texas than in most other states.

Proving causation in other toxic substance exposure cases is extremely difficult as well. The main issue is that health-related conditions such as cancer are difficult to trace back to a single cause.

Take chromium-6, a chemical that still lurks in much of America's drinking water.

If you drink chromium-6 for years, it could end up causing stomach cancer. But was your stomach cancer caused by ingesting the heavy metal, or do you have bad genetics? Is there a high incidence of stomach cancer in your area? Could something else be the cause of the cancer?

If you think you’ve been harmed by pollution or a toxic substance in Texas, consider working with a personal injury attorney. Toxic tort cases are complex and large companies have large legal budgets. You don’t have to fight alone.