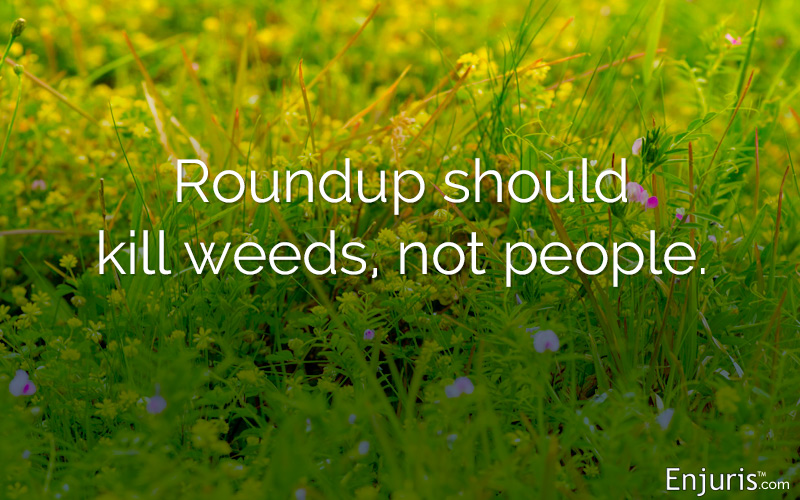 Some breaking legal news out of California: An Oakland jury awarded a couple $2 billion in punitive damages for a lawsuit related to cancer from exposure to Roundup weed killer.

Alva and Alberta Pilliod, now 76 and 74 years old, respectively, used Roundup for 30 years in their residential landscaping. They sued Monsanto Co., the manufacturer of Roundup, because they believe it caused the non-Hodgkin’s lymphoma that sickened them both several years ago. Alva was diagnosed in 2011 and Alberta in 2015.

Bayer, the parent company of Monsanto, denies that the chemicals in Roundup could’ve been responsible for the Pilliods’ cancers. In a statement, the company said that the Pilliods had “long histories of illnesses known to be substantial risk factors for non-Hodgkin’s lymphoma.”

Table of Contents + show
Other notable California Roundup lawsuits
Bayer’s next step
What is a toxic tort?
What to do if you have an illness that could be a toxic tort

Dewayne Johnson v. Monsanto Co.: Johnson was diagnosed with terminal non-Hodgkin’s lymphoma in 2014 at 42 years old. He had been a school groundskeeper, and his job included regularly spraying Roundup as the school’s herbicide. Despite taking appropriate precautions while using the chemicals, Johnson was soaked in Roundup one day when his sprayer broke. Shortly after, he began to see symptoms that were eventually diagnosed as cancer.

Last year, a San Francisco jury found that Monsanto failed to warn consumers that glyphosate, a chemical in Roundup herbicide and related products, is linked to cancer.

The jury awarded Johnson $289 million, but the judge later reduced the amount to $78 million. Here’s Johnson’s story in his own words.

Edwin Hardeman v. Monsanto Co.: Edwin Hardeman lived on 56 acres of land in Sonoma County. In 1986, he began to use Monsanto herbicides to treat poison oak, overgrowth, and weeds. He continued to do so until 2012.

In 2015, Hardeman was diagnosed with non-Hodgkin’s lymphoma. Although there were hundreds of Roundup lawsuits filed, his was selected as the first to go before a jury.

Hardeman’s Monsanto trial was in two phases. The first was to determine whether Roundup was a cause (or a significant factor) in his developing cancer. The second determines whether Monsanto had knowledge that Roundup was dangerous, and if it disregarded that information.

Bayer intends to appeal the verdict by arguing that Roundup doesn’t cause cancer.

Glyphosate, the active ingredient in Roundup, was classified as a human carcinogen by the International Agency for Research on Cancer in 2015. However, the U.S. Environmental Protection Agency (EPA) has stated that glyphosate isn’t a risk to public health when used according to its label.

One thing is for certain: Glyphosate lawsuits aren’t going away anytime soon.

According to a 2022 study conducted by the Centers for Disease Control and Prevention (CDC), more than 80% of urine samples drawn from children and adults in the U.S. contained glyphosate.

Glyphosate is the most widely used pesticide in the United States, and Roundup is the most popular brand. Presently, Bayer is facing lawsuits by more than 13,400 plaintiffs nationwide for claims that Roundup caused their cancers.

What is a toxic tort?

A toxic tort is a cause of action for a lawsuit because you were exposed to a pollutant or other toxin that made you sick. It could be a substance in the air, ground, or water, or exposure to a chemical like glyphosate in Roundup.

Your exposure could’ve happened in the workplace or in your own home, and it could be from environmental exposure, pharmaceuticals, consumer products, or in numerous other ways.

The tricky part can be proving that your illness was caused by the negligence of a person or company. The hurdle the plaintiffs in the Roundup cases faced was showing that they wouldn’t have developed non-Hodgkin’s lymphoma but for their exposure to the chemical.

In other words, if they hadn’t been exposed to Roundup, would they still have cancer?

In these cases, the juries found that they did in fact develop cancer because of their exposure to the chemical. But sometimes, that can be hard to prove, especially if you develop an illness many years after exposure to a substance.

The second aspect to your lawsuit must be that the person or company responsible for your exposure was negligent. In an environmental exposure, this could be because of improper waste disposal or handling of chemicals that allowed them to be released into the air, soil, or water.

In a pharmaceutical liability lawsuit, or one similar to the Roundup cases, it could be because the manufacturer didn’t warn consumers about the risks when using the product.

A toxic tort lawsuit is complicated. There are a number of elements to consider, one of which could be whether or not there are other plaintiffs making similar claims. Your best bet is to consult a personal injury attorney who specializes in product liability or toxic tort cases.

The Enjuris Personal Injury Law Firm Directory is your first step toward getting help. It’s your source to find an experienced lawyer in your state who can work with you to recover costs for your illness.

Do you use Roundup weed killer?