Accident Help (Home) » Personal Injury » Can You Recover Damages for PTSD After an Accident? 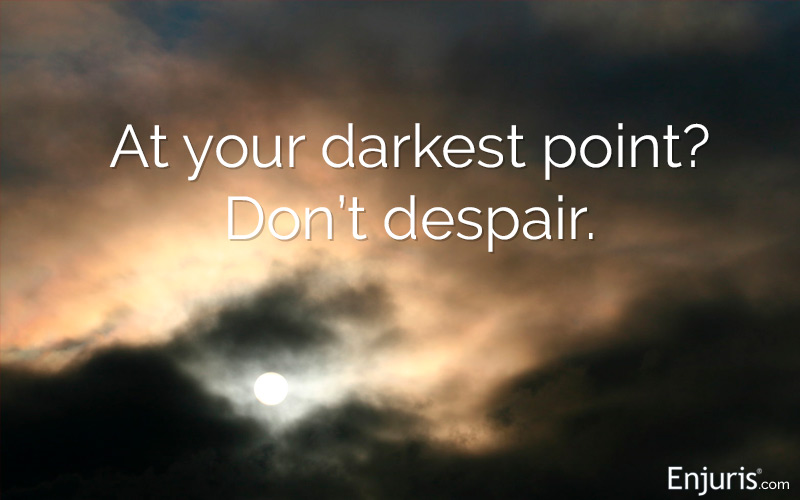 A lawsuit can’t cure your mental anguish or PTSD, but it can ease your financial burden that results from how the condition has affected your life.

PTSD and mental anguish are psychological conditions that can be the result of witnessing or experiencing trauma. If you meet the criteria for one of these diagnoses, you might be able to sue the liable party for your injury. Here’s what you need to know in order to be compensated for a PTSD or mental anguish claim.

After an accident, your physical injuries might be just the beginning of your recovery process. A physical injury is usually easy to see, diagnose and prove, especially when you have medical reports that detail your treatment.

Emotional trauma isn’t always visible, and sometimes even the injured person doesn’t fully understand the depth of their psychological injuries — and emotional damage could last for years, or even a lifetime, after an accident.

Post-traumatic Stress Disorder (PTSD) is defined by the National Institute of Mental Health as “a disorder that develops in some people who have experienced a shocking, scary, or dangerous event.”

People who experience trauma will have a wide range of reactions, but most will eventually recover from emotional symptoms. Other people will continue to experience emotional trauma, including feeling stressed or afraid even when they’re not in danger, which could lead to a diagnosis of PTSD.

PTSD can begin immediately or within a few months following a traumatic event, or they could surface many years later. In order to be diagnosed as PTSD, symptoms must:

Some people experience short-term PTSD and others have a chronic condition.

These symptoms are included as part of a PTSD diagnosis:

PTSD symptoms in children and teens

An adult must have all of the following symptoms lasting for at least 1 month in order to have a PTSD diagnosis:

PTSD is normally diagnosed by a doctor who specializes in mental health, like a psychiatrist or psychologist.

What is mental anguish and emotional distress?

Mental anguish and emotional distress conditions don’t have a list of specific symptoms like PTSD, but they’re still mental conditions for which you can recover damages based on the psychological impact of your injury.

There’s no specific definition for emotional distress, but symptoms could include (but aren’t limited to):

If you’ve been in an accident that caused emotional distress, try keeping a journal or log to record how you’re feeling each day. It can be important evidence to document how your life has been affected by your injuries or as a result of the accident.

Can I sue for PTSD?

You can sue for PTSD as the basis for an emotional distress claim in a personal injury lawsuit.

The plaintiff must demonstrate mental anguish by showing that their extreme feelings of fear, grief, etc. have resulted in long-lasting negative effects.

In most personal injury lawsuits, the jury will first make a determination that the defendant is liable for the plaintiff’s physical injuries and then address psychological injuries as part of the damages phase of the trial.

Like any personal injury claim, you need to prove three essential elements to recover damages:

PTSD is an actual injury, but sometimes mental health diagnoses are more difficult to prove than a physical injury. When you have a broken bone, internal organ damage, or other physical harm, these things can be shown by presenting MRIs, X-rays, and other diagnostics that clearly demonstrate the nature and severity of the injury.

Emotional injury doesn’t “appear” on a medical test. You might have experts who disagree on whether the patient has diagnosable PTSD. Your lawyer will need to present compelling evidence of actions or behaviors that demonstrate that you meet the criteria for a PTSD diagnosis.

How is PTSD proven in court?

There are 2 kinds of witnesses in a trial: fact witnesses and expert witnesses.

Ultimately, if you’re the plaintiff in a PTSD personal injury lawsuit, the jury will decide whether your lawyer has presented enough evidence that you have PTSD.

Enjuris tip: Your case might hinge on the testimony of an expert witness to show that you’re experiencing PTSD. Read more about expert witnesses.

It’s important to note the differences in how states treat expert witness testimony. Some states will allow an expert to provide an “ultimate opinion,” where the expert is allowed to give a diagnosis of PTSD. In other states, an ultimate opinion isn’t permitted. In those cases, the jury must decide on its own from the medical evidence whether the plaintiff has PTSD.

Making a PTSD claim for a workplace injury

A PTSD claim can be covered under workers’ compensation in some states.

What kinds of PTSD injuries happen in the workplace?

Workers who are exposed to particularly traumatic events are more likely to experience PTSD from a workplace event — police officers, firefighters, emergency medical personnel, first responders and other people who work in high-stress or dangerous environments are at higher risk.

PTSD can also occur in someone who witnesses a tragic or frightening event at work, like seeing a fellow employee die or suffer serious injury in a workplace accident.

It’s important to be aware of the workers’ compensation statutes of limitations in your state. In most states, the statute of limitations begins to run when an injury is diagnosed or when the person should have been reasonably aware of the presence of the injury. PTSD can’t be diagnosed until a certain amount of time has passed because, by definition, it relates to ongoing or long-lasting symptoms.

If you make a claim for workplace-related PTSD, you can receive benefits for medical treatment related to the condition, compensation for permanent mental health impairment, lost wages, and any other benefits to which you’d be entitled for a physical injury through a workers’ compensation claim.

There are specific requirements you must meet in order to qualify for PTSD disability benefits.

Your medical records must show you suffer from at least 1 of the following:

You also must show at least 2 of these symptoms:

If you don’t have 2 of those symptoms, you can also make a disability claim for PTSD if your medical records prove that the PTSD results in your inability to function on your own outside your home.

A car accident can be a traumatic event, even if you weren’t physically injured. PTSD could arise for a person in an accident who wasn’t injured but who witnessed injury to others. It could also be part of a wrongful death lawsuit if your PTSD is the result of witnessing a family member’s death in an accident.

In a personal injury lawsuit, you can recover economic and non-economic damages.

Economic damages are those with a specific financial value — like medical treatment and lost wages. Non-economic damages don’t have a specific monetary value, so they include pain and suffering, loss of consortium, and other emotional injury.

Once you’ve been diagnosed with PTSD, your costs become economic damages. You likely have costs related to therapy, medication, or lost time from work. Those items can be calculated and compensated the same as they would be for any physical injury.

How PTSD damages are calculated

These 5 factors would be considered in calculating damages for PTSD:

Is it worth it to file an injury claim for PTSD?

Only the person with PTSD can determine if it’s the right course of action for them.

There is a potential for a large settlement or jury verdict in a PTSD personal injury case. However, it does require that the plaintiff’s medical and emotional history is put “on the stand” for the jury to evaluate. It could be painful for a plaintiff with PTSD to have to testify on their own behalf, and you might want to ask your lawyer about that possibility ahead of time.

Often, physical injuries from an accident are noticeable immediately or shortly following an accident. But PTSD could take a while to diagnose. Sometimes, that means the damages weren’t included in an initial personal injury claim or that the statute of limitations has passed by the time the PTSD is diagnosed.

Your lawyer would also need to prove that in addition to your actually suffering from PTSD, that the condition is the direct result of the accident. Any claim your lawyer makes is going to be refuted by the defense attorneys. That’s not to suggest that you shouldn’t pursue a PTSD lawsuit — but it’s important to discuss it with your lawyer and your mental health provider first.

Finding a lawyer for a PTSD lawsuit

Selecting the right lawyer is like choosing a doctor or therapist — you need to feel comfortable sharing your medical history, what you hope to achieve, and how you feel today.

Especially if your claim is for PTSD or some other kind of mental anguish, it’s going to be especially important that you’re able to freely share your thoughts, feelings, and behaviors with your lawyer. You don’t want to minimize what you’re going through because doing so doesn’t help your case. You’ll want to be truthful with your lawyer about how your mental state is affecting your everyday life.

Your lawyer should demonstrate empathy for what you’re experiencing, along with an understanding of how PTSD cases have been treated in your state courts.

These cases can be more complicated than other types of claims because mental health issues aren’t always visible to a judge or jury. Your medical history — both physical and mental — will be called into question and your lawyer will need to be prepared to demonstrate why you deserve to recover damages based on emotional trauma.

Please feel free to use the free Enjuris Personal Injury Lawyer Directory to find a lawyer near you who can help with your PTSD claim. Enjuris also offers these resources: