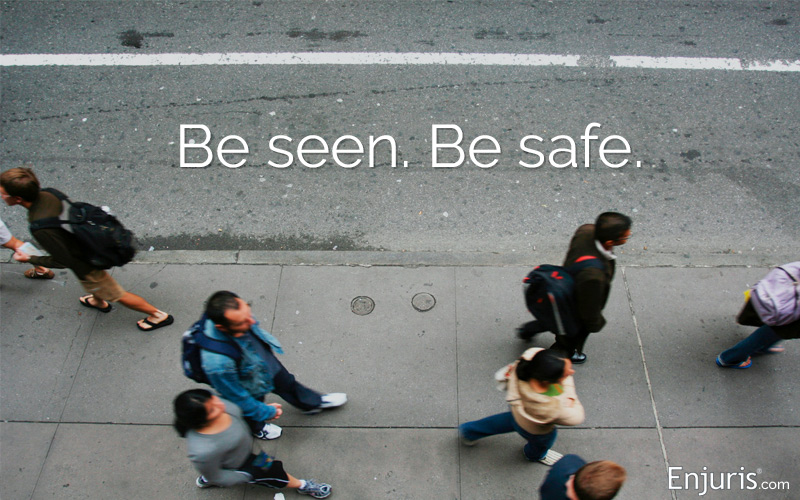 According to the Governors Highway Safety Association (GHSA), pedestrian deaths have reached the highest level in decades.

While this is concerning in and of itself, it’s particularly worrisome when you consider that most of us are pedestrians at one point or another—whether we’re crossing the street to get to our parked vehicle or we’re jogging 6 miles to work every morning.

Here at Enjuris, we spend a lot of time talking about vehicle-on-vehicle accidents, but what happens when a vehicle hits a pedestrian?

The law states that drivers are supposed to yield to pedestrians, and yet each year nearly 80,000 people are hit by a car or truck while crossing the street, walking, jogging, riding a bicycle, etc. Sadly, over 6% of these collisions are fatal for the pedestrian, and many more result in devastating injuries.

Facing factsIn 2019, 6,412 pedestrians were killed in motor vehicle crashes. The number represents the highest mortality rate since 1990. That historic number rose to 6,721 in 2020, a nearly 5 percent increase from 2019.

The GHSA, a nonprofit group representing the state and territorial highway safety offices, identified several factors contributing to the increase in deaths. These factors are:

With respect to population growth, it’s no surprise that the 10 states with the highest population growth from 2017-2018 (Arizona, Colorado, Florida, Idaho, North Carolina, Nevada, South Carolina, Utah, Texas, and Washington) experienced a 5% increase in the number of pedestrian fatalities during that time period.

The most dangerous states to be a pedestrian in 2018 were Arizona, California, Florida, Georgia, Texas, and New Mexico. The safest state was New Hampshire.
Tweet this

The GHSA also found that most fatal crashes take place after dark and alcohol played a role in almost half of all fatal pedestrian accidents, whether it was the driver or pedestrian who was drinking.

All states require motor vehicle drivers to exercise reasonable care to avoid hitting pedestrians, which is why the victims or families of the victims in a pedestrian accident typically deserve at least some monetary remuneration for the driver's negligent level of care – even if the pedestrian is proven to be at partial fault for jaywalking, stepping into traffic or failing to obey a "Do Not Cross" sign.

In the vast majority of states, drivers are required to:

Just like drivers, pedestrians are also required to exercise reasonable care when navigating the sidewalks and roads. Most states require that pedestrians:

Who’s at fault in a pedestrian accident?

If a driver breaches their duty to drive with reasonable care or violates a pedestrian law and a pedestrian is injured as a result, the driver can be sued for negligence.

Similarly, if a pedestrian fails to navigate the roads with reasonable care or violates a pedestrian law and a driver is injured as a result, the pedestrian can be sued for damages.

In some cases, both the driver and the pedestrian are at fault for an accident. Here’s an example:

Tom is driving down the road texting his girlfriend. Bill is playing catch with his son in his front yard. Bill misses the ball and without looking darts into the road after it. Tom, who is still looking down at his phone, doesn’t see Bill and hits him with his car. Bill sues Tom for his injuries.

In this example, a court could reasonably find that both Tom and Bill are responsible for the accident. What this means for Bill’s ability to recover damages depends on the state in which the lawsuit is filed.

Enjuris tip: Learn more about shared-fault rules, including which rule your state follows.

The purpose of "damages" in a personal injury lawsuit is to compensate the injured person for the harm they suffered. The idea is that the compensation should “make the person whole again.”

To this end, most states allow injured pedestrians to recover the following damages:

Medical expenses, lost wages, and property damage are all relatively easy to calculate. These types of damages are called economic damages.

It’s much more difficult to put a price tag on the pain and suffering and emotional distress that results from a pedestrian accident. These types of damages are called non-economic damages, and both insurance companies and lawyers have a general formula they use to estimate these damages.

Enjuris tip: If a loved one is killed in a pedestrian accident, certain family members may be permitted to file a wrongful death lawsuit to recover damages.

How to prevent pedestrian accidents

As a pedestrian, you lack the steel armor that motor vehicle drivers are equipped with. Consequently, you must stay alert at all times while walking or running near motor vehicles. Even if you have the right of way, don’t assume that drivers see you. You may be right, but you have everything to lose—not them.

The Centers for Disease Control and Prevention (CDC) urges that pedestrians do 3 things to stay safe:

If you’re involved in a pedestrian accident, your first concern should be your safety. Call emergency services (911) or have someone call them for you.

As you recover, be sure to keep track of all your medical expenses.

In addition, it’s a good idea to keep a post-accident journal to document the day-to-day impact of the accident on your life.

Finally, don’t hesitate to use the Enjuris lawyer directory to locate a personal injury attorney in your area so you can begin the process of recovering compensation for your pedestrian accident. Most attorneys offer free initial consultations and they can help you with everything from negotiating an insurance settlement to taking your case to trial.