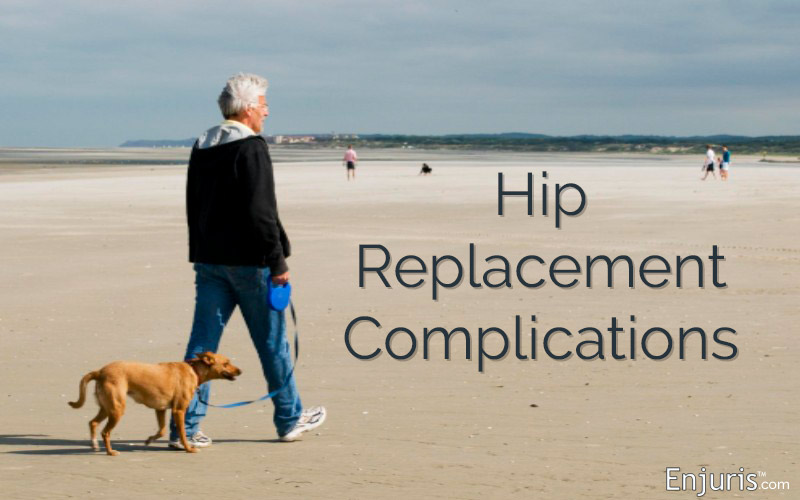 The following conditions are the most common complications resulting from hip replacement surgeries.

This is when local inflammation destroys the bone and loosens a prosthetic device (AKA aseptic loosening), which can ultimately result in dislocation after hip replacement surgery. When the number of "wear" particles in the joint space overwhelm the ability to clear them, they cause inflammation, which leads to bone loss and device loosening, and then osteolysis. Any particle debris – plastic, metal or cement – can cause osteolysis.

Prosthetic failure rates from this type of complication are around 20%, according to MedScape.

There are tendons, tissues and ligaments surrounding the hip joint, all of which work in tandem to keep the bone in place. When these are opened up and angered during surgery, they become less stable. This can result in the new joint loosening from the implant site and dislocating. Patients are encouraged not to sleep on the side where surgery took place, cross their legs, or sit on soft sofas and low chairs.

Any surgery carries the risks of inflammation or infection. In fact, infection is one of the most serious complications you may face after a joint replacement surgery. However, if caught soon enough after surgery, your doctor might reopen the surgical site and inject antibiotics directly.

An infection can occur even years later.

When you've been accustomed to standing a certain way because of hip pain, it will be strange to notice after surgery that the injured leg has probably lengthened a little bit. That's because the offending hip has now been repaired, allowing you to stand normally. It will take some getting used to.

Sometimes the leg is too long or short, despite the surgeon's best efforts – or possibly due to a surgeon’s inexperience. This can lead you to stand in a way that puts more pressure on the joint than necessary. Gait training (essentially, learning to walk correctly) or a heel lift might be choices to discuss with your doctor.

ABC 7 Chicago reports that, according to Dr. Henry Finn at the University of Chicago, Weiss Memorial Hospital, about one third of hip replacement patients will have an obvious difference in lengths, which may lead to hip and back pain. Dr. Finn is a hip revisionist who says early intervention is best – aim for revision surgery to correct the different leg length within six weeks of your first hip replacement surgery it at all possible.

Surgeries can result in complications from blood clots. These gel-like clumps are good when they help to stop an injury or cut, but sometimes they can form inside veins and stubbornly refuse to dissolve. They can cause pain, weakness, sudden difficulty in speaking (aphasia), lightheadedness, chest pain and more. If they cause swelling, redness or pain, you should speak with your doctor immediately.

Heterotopic ossification is when bone forms outside the skeleton where trauma occurred; it is also referred to as “calcification” of the soft tissue.

The Journal of Hip Preservation Surgery reports that heterotopic ossification is one of the most common complications of arthroscopy (hip replacement surgery), occurring in up to 44% of hip surgery recipients who do not take actions to prevent it.

Symptoms include fever, erythema, swelling and joint tenderness. Surgeons will likely recommend a bone scan to confirm this diagnosis, and treat it with a nonsteroidal anti-inflammatory or with local radiation therapy.

Metal-on-metal (MoM) devices can cause many complications as metallic particles begin to shed from the devices and leak into the bloodstream or soft tissue. When enough of the debris builds up, it can cause a condition called "metallosis" or metal poisoning.

The FDA reports it does not know how often local tissue reactions to metal-on-metal hip implants occur, but rather says it depends on the individual and how they react to metal ions in their bodies. Furthermore, it can occur in hip surgeries other than metal-on-metal.

Certain patients may have an increased risk of device wear or adverse local tissue reaction (ALTR) and should follow-up with their surgeon more frequently. They include:

Sometimes the femur fractures before, during or after hip replacement surgery. This study looked at 38 cases in 36 patients. Of all the femur fractures, 13 happened preoperative, 18 happened during the operation and 7 occurred after. For those that occurred prior to surgery, it seems that the total hip replacement, with custom components, was enough to take care of it.

“The intraoperative femoral fractures usually occurred while the surgeon was reaming the canal, seating the femoral component, or manipulating the femur in patients who were predisposed to fracture.”

In other words, sometimes the surgeon performing a hip replacement has to literally shove a patient's femur back into the hip socket. That trauma can cause fractures of the bone.

If the fracture occurs during the surgery, the study states that immediate access to custom-made components and an understanding of the extent of the fracture are both necessary. Inadequate fixation led to painful problems for 4 of the 18 patients who suffered the femur fracture during their hip surgery.

Another study by the Department of Orthopaedics, Bristol Royal Infirmary, found 17 femoral fractures occurred during 1,751 operations for total hip replacement. That equals less than 1% of hip replacement patients. While this study was conducted on surgeries performed 1965 to 1974, more recent data suggests a wider range of fracture likelihood during hip replacement surgery depending on whether components are cemented (0.1-1%) or uncemented (3-18%).

Early device failure is when the implant did not work or last as long as expected, and it must be revised or replaced. Devices can fail for a number of reasons, but most often it's because of loosening, friction, dislocation or severe inflammation. Failed hip replacements usually result in revision surgery, and that surgery is likely to be less successful because bone loss makes the new implant more difficult to anchor in place. The acetabular cup is the most common culprit of early device failure.

The incidence of hip implant failure depends on the materials used in the hip implant device, it appears. Additionally, age and gender may play a role, according to the Arthritis Foundation:

“Compared with implants made of other materials, all-metal joints had a substantially higher overall failure rate. After five years, 6.2 percent of metal-on-metal hips had failed, whereas only 3.2 percent of ceramic hips and 1.7 percent of metal-on-plastic implants had. Failure rates were highest for younger women and for implants with larger heads – 36 millimeters or more – in both men and women. The head is the ball of the device that fits into the hip socket.”

The implant starts to "creep," moving where it's not supposed to be. This is, thankfully, considered rare though very serious. However, Science Direct reports that frequency of migration of the intrapelvic cup is tending to increase because of the increase in life expectancy, the growing number of implant surgeries and a greater frequency of mechanical loosing after surgery.

This is the death of bone tissue because of a lack of blood supply. The bone will start to crumble and eventually collapse. If a bone is fractured or dislocated, it can lead to avascular necrosis; however, a heavy intake of alcohol or high-dose steroid medications can also contribute to this condition. Osteonecrosis can occur in any bone, but it most often affects the hip. In fact, it can be a cause for a patient to consider total hip replacement surgery. After hip surgeries, osteonecrosis seems to be more associated with hip resurfacing than a total hip replacement.

These are tiny fractures in the bone around an implant, and they usually occur after a total hip replacement patient has had an implant for a number of years. If these are discovered, surgery will likely be necessary. Most of the fractures are normally found around the stem of the implant, though they might be found at the hip socket. These fractures are most often caused by a fall or direct hit to the hip area.

Not all surgeries are successful, and patients might experience more pain than they had before. This might be because the implant is compressing a nerve, or scar tissue has built up in the surgical site. If soft tissues or ligaments around the implant were damaged, this can also result in increased pain.

The International Association for the Study of Pain (IASP) defines post-surgical pain as pain that developed after surgery and has stuck around for at least 3 months. It’s estimated that 10-50% of all patients experience this type of pain post-surgery. Surgery is known to be the second most common cause of persistent pain after degenerative conditions.

According to the findings of Wylde et al., 27% of patients undergoing total hip arthroplasty (THA) suffer from persistent post-surgical pain of any severity, with 15% reporting severe and 6% extremely severe pain.

Allergic reaction to the implant itself

While rare, patients might be allergic to the implant itself, which can cause an allergic reaction. This is generally associated with metallic implants, as hypersensitivity to chromium, nickel, cobalt, titanium and molybdenum are more common than materials found in ceramic or plastic implants. Medscape reports that as many as 13% of people are sensitive to nickel, cobalt or chromium. Additionally, development of a sensitivity to metal after implantation is thought to be common.

Metal implants can trigger an immune response when they come into contact with bodily fluids, meaning that when blood laced with metal reaches the skin, it can swell, rash or blister. Systemic, or body-wide, reactions are far less common, though symptoms can include weakness, fatigue, diarrhea and headaches, as well as pain or reduced function in the surgical site.

Some patients also have allergic reactions if bone cement is used, though this is rare.

It seems that determining whether symptoms are because of an allergy is difficult, but if there is recurrent pain and aseptic loosening of the implanted hardware, then metal hypersensitivity should be considered. It’s debatable whether skin patch testing for metal allergies prior to hip replacement surgery will help predict a sensitivity to the material.

Death during or after surgery

This is, unfortunately, pretty self-explanatory. Thankfully, it does not happen often in a procedure such as this. Based on a study in England and Wales, which has the largest registry of implants, only 0.4% of patients died within 90 days of surgery.

There are thousands of lawsuits or mass torts for hip replacement devices that failed. If your hip replacement broke down in some way or wasn't implanted correctly, you very likely have a legal claim. Getting damages, however, can take a very long time.

You’ll want to review the relevant statute of limitations for your state (also known as “how long do I have to file a claim?”). If you don’t file within that specific timeframe, your case will be barred from the courts.

For medical malpractice, there are often pre-filing requirements, such as notifying the medical professional who performed the surgery and providing a certified letter from a doctor outlining your injuries. Failing to comply with this requirement can cause your case to be tossed out.

These claims are hard to prove. Why? Because with medical malpractice, you have to show that the doctor did indeed cause your injuries, and that requires expert medical testimony. With defective products, you have to illustrate the chain of supply, figure out where in the pipeline things went wrong, and outline it for a jury. A good attorney can take that weight for you.