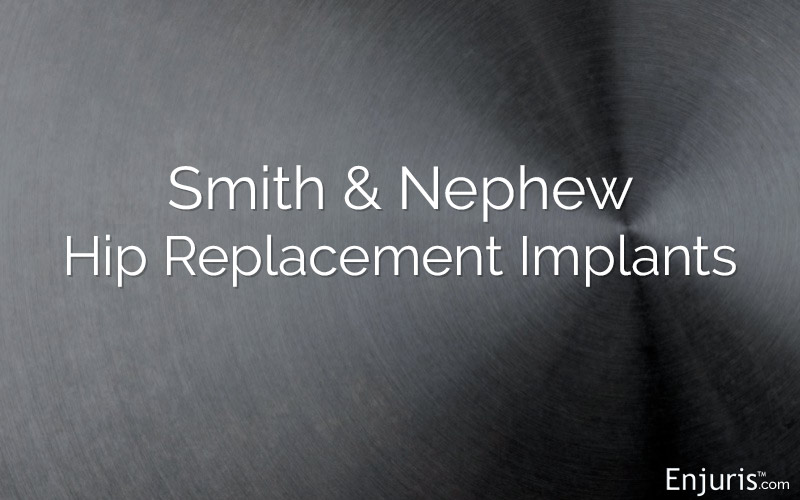 Smith & Nephew is an international medical device manufacturer based in the United Kingdom. They’ve done booming business in recent years; 2016 saw the company rake in $597 million, in hip replacement implants alone. And that’s not even the biggest part of their company.

The manufacturer makes a variety of different hip implants for everything from revision surgery to a total hip replacement. However, it seems that no medical device company escapes scrutiny unscathed, because a few of their products started to experience early failure rates and fracture.

Was your Smith & Nephew hip implant recalled? Start a lawsuit
Tweet this

What were the complaints about Smith & Nephew hip replacements?

The biggest problems were patients experiencing osteolysis (inflammation that ends in the loosening of an implant from the socket) and metallosis (metal particle shedding that builds up in soft tissue, which results in blood poisoning). There were also problems with the devices fracturing.

Other issues from Smith & Nephew hip surgery implants include:

The federal government had its own problems with Smith & Nephew — mainly, that they were paying surgeons to use their products. Technically, kick-back schemes are a big no-no where the feds are concerned, so in 2007 they made Smith & Nephew pay millions in fines before putting them on a regulatory monitoring basis.

Additionally, Smith & Nephew settled another government lawsuit in 2014, which was because of them selling Malaysian-made implants while claiming they were manufactured in the United States.

This is a modular hip implant introduced to Europe and Australia in 2007; it didn’t come stateside until 2009. “Modular” means the surgeon can choose individual components of the device based on the specific patient. An acetabular system generally has several parts, one of which is a liner. This liner could be made of metal (high carbide cobalt chrome), plastic (polyethylene), or ceramic. Patients who chose a metal liner that then rubbed against another metal part of the device would experience particle shedding and a high friction rate. In 2012, Smith & Nephew voluntarily recalled the hip implant device’s metallic liner version, citing a higher-than-average failure rate and patients needing revision surgeries. Up to 4,000 of these were distributed in the U.S. between 2009 and the recall in 2012.

This system — often used in surgeries in conjunction with the R3 acetabular system — caused infections, inflammation, metallosis, pseudo-tumors, dislocation and more. Much of these required additional surgeries to rectify. Learn more about complications from hip surgery.

Like other metal-on-metal pieces, this caused patients to undergo revision hip surgeries and/or experience metallosis. There were also numerous reported cases of osteolysis.

The main issues were early hip device failure and fracturing, necessitating revision surgery. This modular titanium implant proved to be popular because surgeons could pick exactly which pieces to make up the whole, making the process individual to each patient. However, it also called metallosis when used with another metal component.

Enjuris tip: Metal-on-metal implants are a design defect case. Even when used as intended, they can still cause harm.

Are there lawsuits against Smith & Nephew?

Hip implants such as Smith & Nephew’s Birmingham or Redapt systems, or its R3 Acetabular product, would fall into the category of “design defects.” They endangered the health and safety of the end user. Even when used as intended, they can shed particles that build up in soft tissue or loosen from the socket.

As of right now (January 2017), there are no class action hip implant lawsuits against Smith & Nephew, though there is multi-district litigation pending in Maryland. As of January 2018, there are 127 cases pending in the MDL. This will proceed in federal court. Most cases are still being considered by attorneys and are in the early stages.

There have been a few recalls of Smith & Nephew hip implant devices, though they were voluntary and done by the company itself. The R3 Acetabular System was recalled in the United States in 2012, and in 2016 they also recalled the Modular SMF and the Modular Redapt Systems.

Smith & Nephew products currently don’t have class action lawsuits, but you can still sue for issues Tweet this

What should I do if I think I have a defective Smith & Nephew hip replacement implant?

If you’re not sure whether your Smith & Nephew hip surgery device is part of an active product recall, first speak with your surgeon. There isn’t a national registry of devices in the United States, so he or she can review your medical records to confirm what you have. Then, search online to see if that device corresponds to a recall. You can set up a Google alert for “Smith & Nephew hip replacement recalls” and it will bring up every result for you daily.  (How to set up a Google Alert.)

You might not ever have problems with your hip surgery implant, even if it was recalled. Just because a company recalls a product doesn’t mean that yours will automatically fail. You should always keep an eye on your surgical site and watch for any unusual symptoms. Check in with your surgeon at least annually.

If you believe your device has failed or is failing, reach out to an attorney – and do it quickly. You don’t want to file outside of the statute of limitations for your case. (This is the length of time in which you can file a claim, and it varies by each state.)