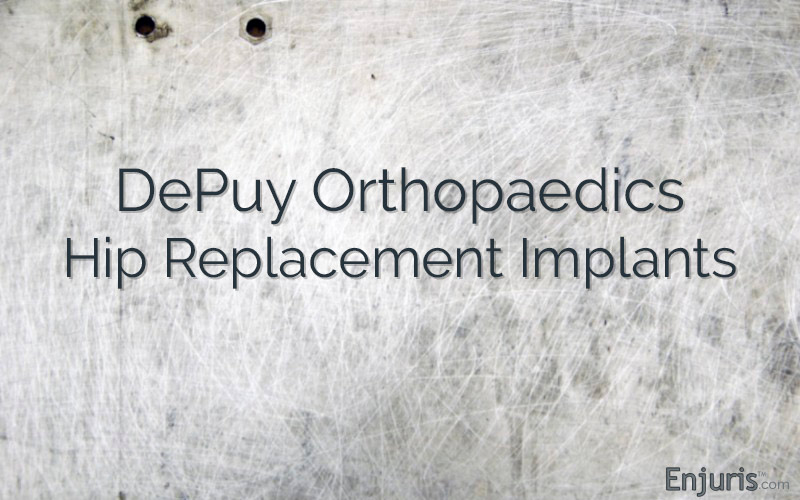 Which surgical implants cause trouble

DePuy Orthopaedics is a subsidiary of Johnson & Johnson, making it one of the largest medical device manufacturers in the world. More than one million patients have received implant devices made by the company, which range from hip to knee to shoulder replacements. Most of them don’t have problems.

However, we are focusing on hip implants in this article. DePuy created more than a few products that have proven quite popular:

These medical devices are implanted into the pelvis with the hope of patients feeling less pain and moving more freely. They normally come in a variation of ceramic-on-polyethylene or metal-on-polyethylene. However, the hip implants used to come in metal-on-metal, and that is where problems arose.

Was your DePuy hip implant recalled? Join one of more than 13K cases
Tweet this

The most significant problems were osteolysis (inflammation and loosening of an implant) and metallosis (shedding of metal particles that build up in soft tissue, leading to blood poisoning). Because of how they were made and the materials used, the number of lawsuits surrounding these devices used in hip replacement surgeries exploded.

Metal-on-metal hip surgery implants such as DePuy’s ASR system or its ASR XL System would fall into the category of “design defects.” They endangered the health and safety of the end user. Even when used as intended, they can shed particles that build up in soft tissue or loosen from the socket. That, obviously, was not DePuy’s intention.

Johnson & Johnson allotted $3 billion for lawsuits in 2012, hoping to settle approximately 3,000 cases. It ended up being around $4 billion by the end.

Enjuris tip: Metal-on-metal implants are a design defect case. Even when used as intended, they can still harm the patient.

There are also lawsuits around Depuy’s Pinnacle hip surgery implant, which was approved by the FDA in 2000. However, its metal liner failed in approximately 14% of patients, as discovered by the Journal of Bone and Joint Surgery. Patients were experiencing everything from fluid around the implant to necrotic tissue (also known as “tissue death”). These were never officially recalled, but the company stopped selling the metal-on-metal versions. A jury awarded $502 million to five plaintiffs in January 2016; another jury awarded $1 billion to six plaintiffs in December 2016; and a third jury awarded $247 million to six plaintiffs.

DePuy Orthopaedics has voluntarily recalled multiple devices over the years, rather than the FDA. The following models have caused numerous issues:

You might be able to join a class-action lawsuit if your DePuy Orthopaedics implant failed.
Tweet this

The ASR XL system (recalled in 2010) was implanted in more than 93,000 patients worldwide and approximately 30,000 in the United States alone. Because of a regulatory loophole that allows “substantially similar devices” to skip past FDA approval, the system went on the market without appropriate testing; patients started experiencing inexplicable pain and finding dead tissue near their surgical sites, among other horrific discoveries. (The ASR Hip Resurfacing System only affected international patients, as the FDA withheld its approval in 2009). The National Joint Registry of England and Wales illustrated that about 12%-13% of patients needed revisional surgery within five years; meanwhile, the life span of a normal hip implant is 15 years.

DePuy executives knew that some of these devices were faulty. Their internal statistics and court records showed a failure rate of almost 40%. They even hired a third-party company to handle medical claims.

What should I do if I think I have a defective DePuy hip replacement implant?

If you’re not sure whether your DePuy Orthpaedics hip implant device is part of an active product recall, first speak with your orthopedic surgeon. While there isn’t a national registry of devices in the United States, at the very least he or she can review your medical records and see what was stuck inside of you. Then, search online to see if that device corresponds to a recall. You can set up a Google alert for “DePuy hip replacement recalls” and it will bring up every result for you daily.

Keep an eye on your surgical site and visit your surgeon for a checkup at least once a year. If there is pain, inflammation or other unusual symptoms, talk to your doctor immediately.

If you believe your hip implant device has failed or is failing, reach out to an attorney – fast. You don’t want to file outside of the statute of limitations for your case. (This is the length of time in which you can file a claim, and it varies by each state.)