Accident Help (Home) » Injury Blog » Can a Police Officer Get Workers’ Comp for an Injury On Duty? 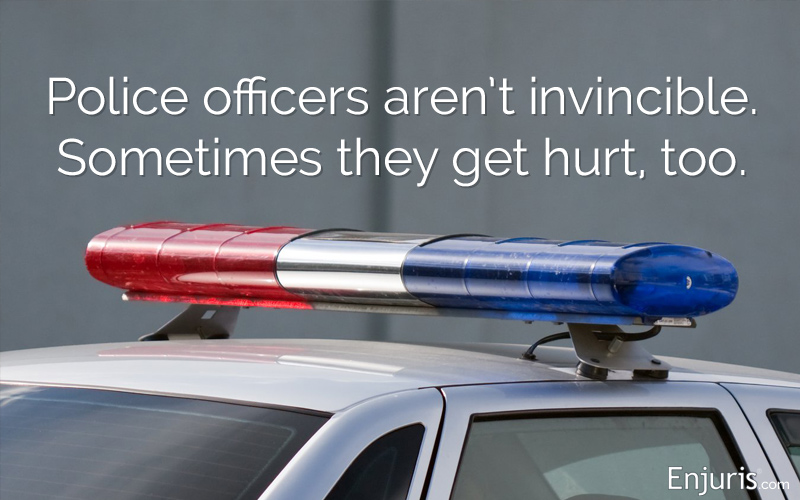 Why did you become a police officer?

However, did you know that law enforcement isn’t one of America’s top 10 most dangerous jobs?

Even so, there are some common ways that a police officer could be injured at work. These include:

These incidents could result in broken bones, head injuries, heart issues or hypertension, burn or fire injuries, wrongful death, slip and fall or other premises liability injuries, neck and back injuries, or any variation of these or other injuries.

Almost every employer, including government agencies like police departments, is required to provide workers’ compensation insurance for employees.

Workers’ compensation benefits cover an employee for any injury that happens at work, whether it’s in the workplace or while performing a duty related to their job. That means that if you fell and got hurt because you tripped over a broken tile on the floor in the hallway at work, you’re entitled to the same type of workers’ compensation benefits as if you’re a police officer hit by a car while issuing a traffic ticket.

Enjuris tip: Workers' compensation generally does NOT cover your pain and suffering, unfortunately.

Can a police officer file a third-party lawsuit for a personal injury?

A third-party lawsuit would be an option if the injury happened at work, but there’s liability on the part of someone who’s not associated with your workplace.

For example, if you’re a construction worker who was injured because a scaffold structure was defective, you might be able to sue the manufacturer of the scaffold rather than your employer. This might be effective if you were seriously injured because it might increase your damages because it can include pain and suffering.

Similarly, a police officer might be able to directly sue the driver of another car after an accident, the owner of a property with a hazardous condition that caused an injury, or even for certain instances of violence against them in their role as an officer.

However, filing third-party lawsuits in addition to a workers’ compensation claim can be complicated. Your best bet is to consult a work injury lawyer near you if you were injured in the line of duty and are considering suing the at-fault individual.

In some states, the Firefighter’s Rule (also called the Professional Rescuers Rule) prohibits lawsuits by police officers, firefighters, and other first responders from suing for damages that happen in the normal course of their duties, even if there’s negligence by another person. The rule is applied differently on a state by state basis.

The basis for the rule is that a first responder or law enforcement officer assumes the risk of their job, knowing what the risks are likely to be. In part, a first responder’s job is to confront danger in order to protect others. The other aspect of the intent for this rule is that public policy wouldn’t be in favor of citizens being afraid to call for help if they’re scared of being sued as a result.

The question about whether the Firefighter’s Rule applies in a specific case is whether the injury is related to a danger that’s reasonably expected as part of a police officer’s duties.

For example, a police officer might experience whiplash if they need to make a sudden stop during a traffic situation. This scenario would probably be considered part of a “typical” day in the life of a police officer. If there’s a liable person who caused it to happen, the Firefighter’s Rule likely would prevent the injured officer from filing a lawsuit.

But what if the officer is killed while issuing a traffic ticket because a driver failed to move over or slow down on the highway?

Every state has a version of a Move Over Law, which requires drivers to move over or slow down when a first responder is handling something in traffic or on the side of the road. The Move Over Law is specifically for the purpose of protecting police officers. If a driver violates a law designed for that purpose, the deceased officer’s family would likely be entitled to file a lawsuit for wrongful death.

An officer suffered an injury while attempting to enter a building to arrest a drug suspect. However, there was no evidence that the building owner had negligently allowed criminal activity to take place inside. The Firefighter’s Rule prevented the officer from suing for damages in that case. (Kivlehan v. 2220 Adams Place Realty Corp.; Sup., Bronx County, 2003)

How you handle a work-related injury as a police officer likely depends on the severity of your injury and the facts surrounding the accident or incident.

If your injury is minor (or can be easily treated and you can return to work), a workers’ compensation claim would likely be the fastest and best route to recovering compensation.

If, however, the injury is serious and you think you need more than what workers’ compensation benefits cover (like pain and suffering or punitive damages), you’ll want to review your options with a personal injury lawyer. You might be able to file a third-party lawsuit if someone was negligent, depending on how the Firefighter’s Rule is handled in your state and the facts of how your injury happened.

As soon as you’re able to do so, you should call a personal injury lawyer in your state who can advise of your legal options. Cases involving police officers can be more complicated than other types of work-related injuries because, in many cases, civilian behavior is the additional variable that can cause significant harm.

The Enjuris law firm directory is an excellent source for finding a lawyer near you who’s capable, skilled, and experienced in handling cases like yours.